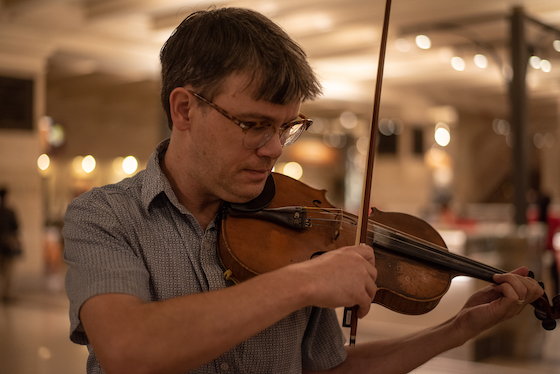 I have made my living primarily from performing on subway platforms in New York City for the last 12 years. I grew up in Seattle and in the 1990s studied composition at Tufts with John McDonald, U. C. Berkeley with Olly Wilson, and in the early 2000s with Louis Andriessen in Amsterdam. I’ve kept up my composition to a certain extent, occasionally putting on concerts of my music at Roulette Intermedium and The Stone. I also play freely improvised music, and I teach violin lessons, but the one thing that has remained consistent has been my daily performances for NYC commuters.

I had busked for several years at Seattle’s Pike Place Market prior moving to New York in 2007. Soon after my move, my guitarist friend Tony, who was visiting me, suggested we try it in NYC. We found a website listing good places to busk and we picked the station closest to where I lived at the time, the 7th Avenue B/Q station in Park Slope. We played jazz standards for a couple of hours and we did pretty well.

At the time, I had a job working for an online company connecting teachers to people around the country who wanted music lessons in their homes. The job was challenging; especially finding teachers in rural areas willing to travel long distances to teach. I resigned and the company ended up folding soon afterwards.

I also worked for a music contractor playing club dates (fancy weddings mostly). I usually played with one or two other violinists and a cellist. We performed for arrivals, cocktail hour, and the wedding ceremony. We were expected to memorize all of the music, stand in a very specific spot and our shoes had to be shined and so on. Very few people listened; it was much more about the look. The money was great, especially on days when we would join the big band for the post-ceremony dancing. However, for me at least, the gigs were inconsistent.

So I decided to return to the 7th avenue B/Q platform. I tried playing in the evenings, but people were more focused on getting home. In the morning, people appreciated anything to distract them from their upcoming work day. I played there just about every morning for a year. The income was consistent and, along with private teaching, enough to survive on. In 2009 I auditioned for Music Under New York, which is the MTA sponsored program for musicians. Anyone is legally allowed to perform in the subway system, but being a part of MUNY enabled me to play in specialized locations like Grand Central Station and the Staten Island Ferry terminal. I had great support from the people who ran the program, and expanding my busking territory opened up whole new worlds for me.

Busking in New York City was a deeply rewarding experience. I made many wonderful connections; I would see the same people on the platform every day for many years. I played fiddle tunes while children danced, and I watched them grow up. I received many appreciative notes from people having difficult mornings, who told me how much my music helped them feel better. I played many weddings for people I met while busking. Those gigs were so much more personal and meaningful than the club dates, where I never interacted with the people getting married. The highlight of my busking life was when I met my wife, Molly. I was trying a station I didn’t usually play at, and she was heading back to work after getting her taxes done. She missed the train and heard violin, so she walked down the platform to check it out. And so began our wonderful life together. 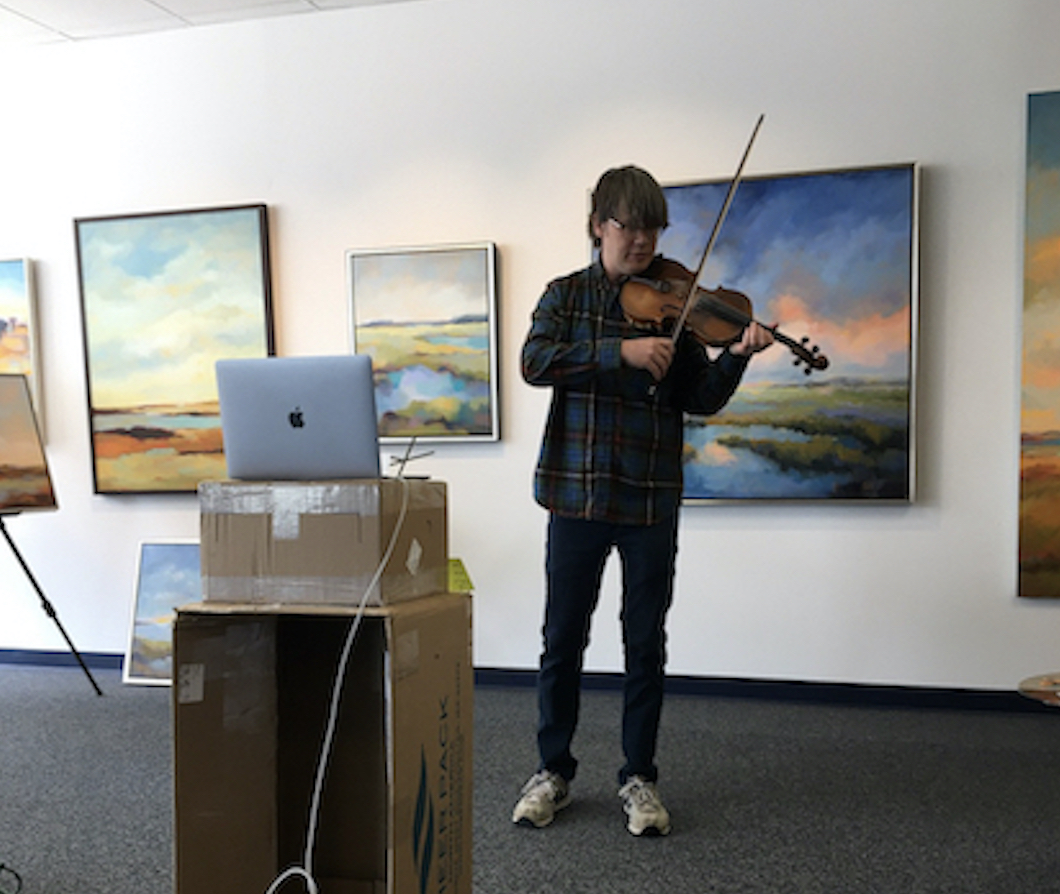 When the coronavirus hit in March, Molly and I left New York and, after a couple of weeks of self isolating, stayed with Molly’s stepmom Ruth Odile Davis. Ruth is a fantastic artist and clothing designer who owns Odile Fine Art on Cape Cod. Needless to say, her business was seriously effected by the pandemic as well. I did some online busking in front of one of her paintings in her store, which was closed to the public. The sound quality is not as good and it is a little strange playing to a computer, but it was great to have the opportunity to perform again, and for friends and family to be able to hear what it is I’ve been doing on the subway platforms for the last 12 years. My teaching at the Brooklyn Conservatory switched to online, so I could do that from anywhere. That worked surprisingly well although there were some glitches, like trying to direct a young student’s attention to a specific note in the music that I would have just pointed to in a regular lesson.

In an effort to stay connected to my musical community, I signed up for an online salon hosted by Contemporaneous, a New York City based contemporary music ensemble. I had not been able attend their in-person salons because they happened on my teaching days. I played a short blues improvisation inspired by Blind Willie Johnson. I often played his piece, “Dark Was the Night,” while busking. The opportunity to share music inspired me to compose something for the next salon.

One of the few downsides to busking for a living is that after four hours of playing, I’m usually not inspired to practice when I get home. So when the quarantine started, I was somewhat more motivated. I found a video of Hilary Hahn playing J. S. Bach’s first solo sonata and this inspired me to get that out and hack through it. Then I got even more ambitious and attempted the Chaconne. That got me thinking about string crossings so I started experimenting with fingering just one string and keeping the others open. I found an interesting effect if I played G5 on the A string and crossed from open D to E and back. There seemed to be something happening beyond the individual notes. I think it had something to do with the G on the A string being higher than the open E.

I decided that I would incorporate this effect into a composition. I experimented with interpolating simple chant-like melodies on one string with crossings to open strings. For the opening of the piece, I came up with a tune on the G string which, I realized later, sounds a bit like a major key Dies irae (Day of Wrath). I may have had the Ysaÿe second solo sonata, which includes a direct quote, in the back of my mind. It is a pretty common melodic pattern so I might be attaching more significance than it warrants, but attempting to make an optimistic Dies irae seems like a decent enough metaphor for these times.

The piece then works its way to the high G on A string, and continues up. I think because of this continuous upward motion, the resolutions to open fifth chords, and perhaps the happy Dies irae, the piece as a whole ended up sounding quite optimistic. Also, towards the end there is a stepwise ascent to an unambiguous D major triad, which I find quite satisfying. The open strings and the melodic figures are reminiscent of fiddle music. And the string crossings come from classical music. So this piece was an interesting way of combining my interests and experiences. I paired down the piece quite a bit, to keep it focused on just what is essential, and I think this simplicity makes it more effective.

I realized I would have better luck recording the piece and sharing it at the salon rather than playing it live, since the sound quality on Zoom isn’t great, even when using the original, unprocessed sound; and of course, recording in advance means I wouldn’t have to worry about making mistakes. The piece is not too difficult. I found that the hard part is to be very relaxed when I play it. It’s more effective when played in a loose, free way in a style I associate more with improvised music than notated classical music. In fact, I used a simple sketch with just the chords to record it, and I would encourage others to do the same, and create their own version. But for people who are interested in what specifically I had in mind, I made a fully notated version.

Molly and I were very lucky to have the support of family during this uncertain time. The shift away from daily busking allowed me access to the composing part of my brain, which has been fairly dormant lately. I am hoping to keep this creative momentum up as we move forward to what I hope will be a better future.

Tom will be doing an online performance with his brother Grady’s artwork on the “Me, Myself and I” series, presented by Connection Works
8pm, Saturday, August 1, 2020
It will be broadcast live on the Connection Works, Inc. Facebook page.