The fourth movement of Gustav Mahler’s Symphony no. 2 is the song Urlicht, or Primeval Light. As I sat in the viola section of the Boston Philharmonic Youth Orchestra on March 10 in Boston’s Symphony Hall, I simply didn’t enter with my part, as I was so spellbound by the mezzo-soprano solo to even remember that I had to play. For me, the first three movements of the piece, each of them entirely different but equally titanic, build to the beginning of the fourth movement, as if the emotional roller-coaster that is Mahler Two, is given a brief respite in the pure beauty of the Urlicht. If you have not heard Mahler’s Second, than I would urge to buy the next ticket that comes across your path; every human being should hear Mahler Two once, if not many times, in their life (In fact, just go listen to the song right now). And since this is violinist.com, I suggest you get to know some of the solo violin passages in the Mahler, because Mahler knows how to write for the violin quite well. 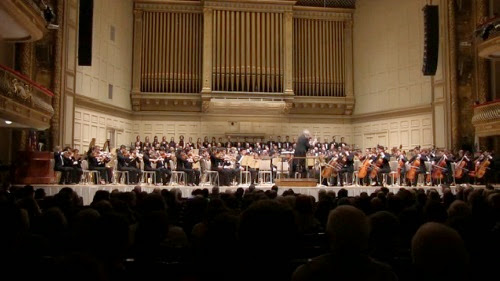 The BPYO in Symphony Hall on March 10th

To play the piece is an entirely different matter. At the end of the concert, the members of the Boston Philharmonic Youth Orchestra and the Harvard University Chorus were completely and utterly drained. Playing the piece is like running a marathon. For ninety minutes, one must not only be completely and utterly focused, but fully invested emotionally and physically. Mahler believed that a symphony should have the entire world within it. Therefore, all of the emotions that we feel in one lifetime have to be present in a period of less than two hours.

There is, however, something unique about young people playing this kind of music. Indeed, the belief that young people do not have the emotional or intellectual capacity to understand the deep and often complex connotations of music is a myth. That day in symphony hall, all assumptions were put to rest, and the possibilities that lay deep within Mahler Two were realized. Though we are all young players, the performance showed that we all have a deep empathy for emotions not yet experienced because of our age. One could say that the spirit of Mahler was present at this performance more so than a professional group. Moreover, the sorrow of professional musicians is that they recapture only rarely the pleasure of playing they knew in youth, when making music was a Hazlittian gusto. Often times, practice becomes a solitary praxis that has little to do with pleasure. What is so special about a high-level youth orchestra playing a piece for the first time is that we experience the pleasure of playing the piece for the first time. There are, of course, those who say a youth orchestra should not play such music as Strauss and Mahler (much less take it on tour), as it is too difficult, or that professional orchestras rarely attempt such music more than once in a decade, so therefore, youth orchestras should not play them. Now, just as everyone will one day cross the threshold into old age, and be given the opportunity to look back, I would like to, at that time, look back with fondness on my younger years. I doubt that any of us in that day would say perhaps we shouldn’t have played such music. In fact, I believe it will be quite the opposite. 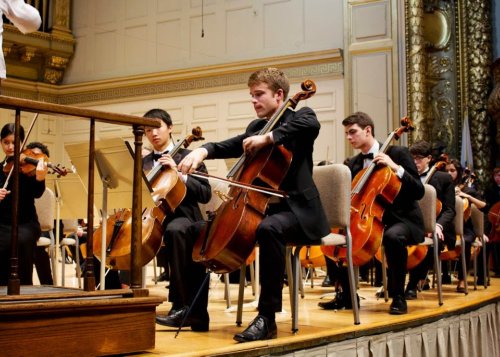 In an incredibly demanding tour to the Netherlands, with five concerts in twelve days, we will perform two different programs including works by Mahler, Strauss, Beethoven, Tchaikovsky, Schumann, and Elgar. I know of few orchestras (let alone youth orchestras) that would dare to put on multiple performances of Strauss Ein Heldenleben and Mahler’s Symphony no. 2 in a 10 day period. While there are works that are just as demanding as these two pieces, there are none that are more demanding. The BPYO, however, is simply not an ordinary youth orchestra. Furthermore, the last “youth orchestra” to take Mahler 2 on tour was the Simon Bolivar Symphony Orchestra of Venezuela. George Li, a brilliant young artist, will be joining us on the tour for performances of the Schumann Piano Concerto. The final concert of the BPYO tour, featuring Mahler and Schumann, will take place in the famed Concertgebouw, a hall which is considered to be one of the three finest concert halls in the world. In addition to the Concertgebouw, the orchestra will be performing in four other venues, some of them new and sophisticated, and some of them old and deeply spiritual, but all of them top-tier venues in the country. 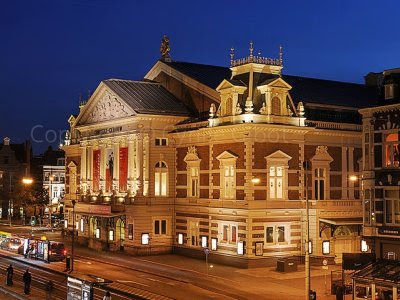 For young musicians, embarking on tour is one of the most anticipated events in our early lives. Every summer, many American youth orchestras, choirs, and bands embark on international concert tours designed to give young musicians some exposure to the world outside their own comfort zone, and for the musicians themselves to act as ambassadors for our own musical culture. In is not uncommon that groups from your own city or area travel to other places to concertize.

The BPYO, however, is a completely different group. First and foremost, the BPYO was committed to making the tour available to each and every player in the orchestra. This goal, in and of itself, requires money that few musical organizations have. Realizing this early on, we began raising money, and have successfully raised $650,000 to travel. This money will go towards airplane tickets, hostels, meals, large instruments, and publicity. Not only are we excited to share our music with the Dutch, but the Dutch are incredibly excited to receive the orchestra. Many of the concert halls are nearing full capacity, and the public is genuinely excited for our arrival. Crews of videographers, photographers, and writers will travel with us to document the tour. One writer is the famed music critic, Richard Dyer. Though he is retired, he has agreed to write about the events of the tour as he travels with us.

As we leave Boston Sunday, each member of the orchestras carries with them knowledge of the possibilities at hand. As Mr. Zander mentioned to us in a tour meeting last Saturday, the people of Holland will have assumptions regarding young American musicians, and we will have assumptions regarding the Dutch, as it is natural for all of us to have assumptions about every single person we meet. If we are, however, to live beyond mediocrity, and we certainly owe mediocrity nothing, then we should strive to form lasting bonds on a small and large scale with every person we meet; we should, therefore, drop all assumptions and simply play our music to the highest level we can achieve.