An Inaugural Season: Coming Together

“Every person is important. It doesn't matter whether you play the violin, the flute, the cello, or the drums; you're still part of the orchestra.”

In a “white sheet” (a system where by members of the orchestra can communicate with Mr. Zander) written a few weeks ago, an anonymous person stated that the orchestra lacks camaraderie. Now, I found this news to be particularly interesting, as I recently had just written a white sheet commenting on the already high level of camaraderie in the orchestra; the person later commented that he felt everything had changed for better. I’m sure many musicians can remember their younger years in youth orchestras where you barely even said two words to your stand partner. The youth orchestra these days is far different. Oftentimes, you spend a great deal of time not only with your stand partner, but with your section mates and the rest of the orchestra. It is now commonplace for youth ensembles to embark on concert tours in the summer. For many people, by the end of a tour they have made friends for life. This growth in camaraderie becomes especially important as an orchestra approaches a concert. Our concert, however, is no ordinary concert. Not only is it a debut, but it is one of the most highly publicized youth orchestra concerts that I’ve ever seen. I hear radio announcements every day, and I have seen two articles regarding the concert in the Boston Globe. With over 1300 tickets already sold, our program of Beethoven’s Egmont Overture, The Elgar Cello Concerto with Alisa Weilerstein, and Strauss’ Ein Heldenleben is highly anticipated. 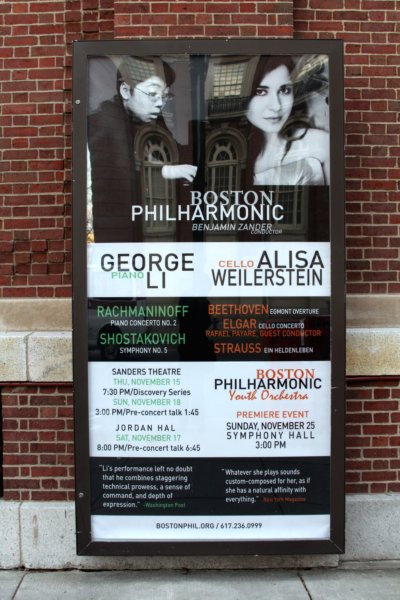 A poster outside of Symphony Hall in Boston

Now, with only three days and two dress rehearsals to go, I believe that the orchestra’s level of camaraderie is completely different. Though I can’t say that I know every person in the orchestra on a personal basis (I would certainly love to), I still feel that we are growing together. I know every single person is excited for the upcoming concert, and the enthusiasm that we all share brings us together. One of the reasons why I think BPYO shows so much potential is because we all feed off of each other’s enthusiasm. If everyone feeds off of each other's passion, it becomes a continuous cycle that spills over to the audience, and makes them just as excited. As an orchestra, we clearly are never at a lack for enthusiasm, and in a piece like Ein Heldenleben, that is so important. But it seems to me that there is a side of BPYO that is slowly becoming apparent, the part that lives and strives together, that supports its members, that laughs and plays as a tightly-knit community, and that comes together as one entity whenever the occasion calls for it. We can support our soloists (with the help of the young, fantastic guest conductor, Rafael Payare) when the time calls for it, and we can come together, all 110 of us, to create absolutely pristine moments when the music calls for it. This phenomenon is what I believe the youth orchestra is about. This is why, at times, youth orchestras become just as dazzling as the Berlin Philharmonic. Audiences can tell when an orchestra loves music, members, and life. This however, can only happen when we are all contributors to the greater cause that is the music. 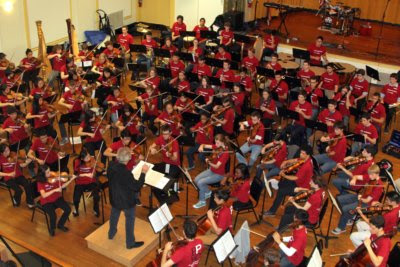 The orchestra during a preview concert

This shaping of a young group of musicians doesn’t happen overnight. It took many hours of rehearsals, sectionals, and getting to know each other to turn 110 young people into a good youth orchestra. We certainly had good guidance, especially in our sectionals. Notable musical leaders such as the famed violinist Adrian Anantawan, and the renowned bassist, James Orleans have helped out with our rehearsals. Oftentimes, we have five or six people in the room, each giving input to both the musicians, and to Mr. Zander. Many of the musicians are from the Boston Philharmonic Orchestra. At El Sistema in Venezuela, the students receive sectional coaching regularly. Many believe that the trick to a good youth orchestra is having sectionals as often as full rehearsals. I believe that the sectionals certainly paid off as everyone at the very least knows their notes (which is a feat in and of itself for Ein Heldenleben). The sectionals, however, enable us to play more together as a section and help us get to know each other more. Even the infamous rehearsal 94 came together much faster than anticipated. Furthermore, one of the “perks” in being in the youth orchestra, is each member gets a free ticket to all Boston Philharmonic concerts. In the past two months, many of the players have seen Strauss’ Don Quixote (which was written at the same time as Ein Heldenleben), Shostakovich’s Fifth Symphony and the Rachmaninoff Piano Concerto no. 2 with George Li, one of our future soloists. 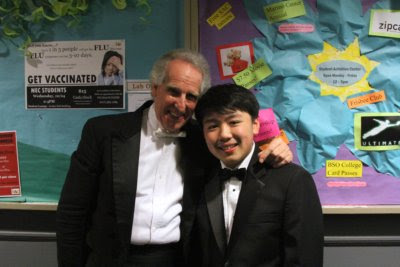 Maestro Zander and George Li after the Boston Philharmonic concert

Though all of these elements play a large role in the overall success of our performances, I believe it is the love of the music and opportunity which brings the orchestra together to create such wonderful experiences. To put it mildly, we all (both orchestra and coaches) love Ein Heldenleben. The excitement that we all share for this piece is not transitory; we come every single week, completely fired up and ready to play. I for one never thought I would be able to play Strauss until I was older.

I don’t really understand why I love Ein Heldenleben so much. In terms of the orchestral repertoire, it is a piece that is not played that often. In my teacher’s fifteen years with the Cleveland Orchestra under George Szell, they played the piece once. It’s a long composition that only has one major pause (happening between the first and second movement); not only is it demanding on the players, but it is demanding on the audience as well. A forty-five minute piece without a break can be a lot to take. Of course, no one will disagree that the grand and heroic opening, spanning three octaves in the noble key of E flat major is addicting. When I was younger, I would listen to the piece in the morning just to fire me up for the day. There is, however, so much more in the piece than just tales of a hero fighting off his enemies. Some of the most beautiful writing for strings occurs in the movements where Strauss quotes his other works. It’s truly uncanny how Strauss weaves previous melodies into this one greater movement. Previously independent of one another, these quotes become counterpointal, creating one larger beautiful melody. And of course, there is always the beautiful love scene depicted on the violin. Now, I love the violin; so the fact that Strauss essentially put a small violin concerto in the middle of a grand symphonic poem is genius. Oftentimes, the violin’s capricious yet seductive solo line seems transcendental in nature; when the final note of the solo violin finally comes, the high E flat, it seems as though all is right with the world, as after such a monstrous piece--full of love, loss, heartbreak and battle--the composer finally returns to the tonic, the noble key of E-flat. It is hard for me to explain in words how lucky I feel to play such a piece, and I think I can speak for much of the orchestra in saying that we are so grateful to Mr. Zander and everyone at the Boston Philharmonic for giving us this once in a lifetime opportunity-to perform one of the greatest works in the orchestral repertoire at one of the greatest concert halls in the world. In an interview on the radio, Zander stated that it meant the world to him to conduct the youth orchestra in Beethoven, Elgar, and Strauss. It means the world to us as well.