Memorial Day weekend is one of those holidays that has several meanings – a day for remembrance, a day for rest, a day for barbecue, parades, sales…

Or, in my case, a day for varnish!
In my experience, musicians (and luthiers) rarely go on vacation. The job descriptions don’t really allow us to. For musicians, on most holidays when everyone else has the day off, we’re working: providing the musical backdrop to Christmas, New Year’s Day (or Eve), the 4th of July, Easter, Hanukah… the list goes on. When “normal” people have the day off, they want to hear music. Even Memorial Day often has concerts scheduled around it. So it’s unusual for us to have nothing to do on a holiday.
Luthiers, on the other hand, generally seem to have the problem that most woodworkers have: it’s just too much fun. An old buddy of mine summed it up pretty well many years ago with this exchange:
“Whatcha doin’, Neil?”
“Makin’ little chips out of big chips.”
Now who couldn’t see the fun in that?
So while everyone else is off grilling burgers and walking the malls, I’d be willing to bet you’ll find a fair number of the violinmakers across this country at their benches, having fun. And so it was that I found myself in the shop yesterday, eager to sit down and do something fun. 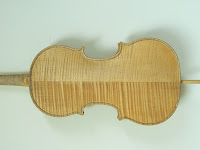 For those who may remember, a year ago (and yes, it was a year ago!) I made a violin birth announcement. I had completed making a violin that I’d started 17 years earlier, as an apprentice. At the time, the announcement was a little premature – the fiddle wasn’t quite born yet; or rather, it was born, but still naked. Here’s what it looked like back then:
And, thanks to a busy schedule, lack of sunlight during winter, and a little procrastination (one of my favorite things!), here’s what it looked like a few days ago:

Now that this violin is old enough to vote, I figured it was finally time to get around to putting some clothes on it. But it’s not such an easy thing to do. Since most of what I do is repairing instruments, when I work with varnish, it’s in retouching, which uses tiny amounts of actual varnish to cover and blend in scratches or cracks. And of course, since the violin already has varnish on it, I’m trying to match the color that’s already there. But with my violin, there’s a simple question that has to be answered: what color do I want it to be? Certainly not this:
There are a variety of colors to choose from, but that’s definitely not one of them! But in the realm of the earth tones that look so good on violins, there’s still a wide selection: browns, reds, yellows, orange, even a little green (a tiny bit can give an aged look to the violin, but too much and it’ll look like it had some bad mayo with lunch). After thinking about it for a while, I settled on a warm orange-brown, with a little red thrown in for drama.
When you’re putting together colors like this, it’s best to start on the light side and go darker with successive coats – it’s much easier to darken a light color than the other way around! It was a little nerve-racking starting things off. I mean, this violin is almost 2 decades old, and it’s the only one I’ve made (so far). After all that work, I don’t want to screw it up now!
Okay, take a deep breath. And here we go with a few pictures to give you the idea: 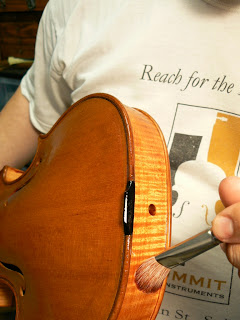 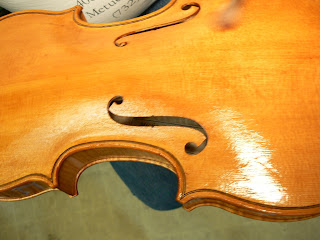 Whew! The first coat is done, and pretty smoothly applied. The varnish will be rubbed down between coats, to even things out and give the next coat a fresh start. But good violin varnish isn’t a smooth surface; as a great maker once put it, we’re making violins, not bar countertops. The soft spruce of the top in particular should have a little crenellation to it, a texture that most makers call the “corduroy”.
Look at this picture closely where the light hits the top; see how the varnish accentuates the grain lines of the spruce? That’s the effect we’re going for. It means that I haven’t screwed up… yet. 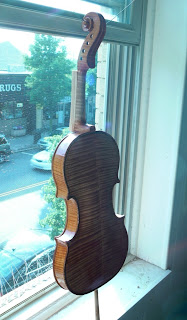 So now that the first coat is on, what we need is a place to hang out, literally:
My shop’s windows catch the sun at about 1 p.m. and keep it until sunset, which is time enough for the varnish to get settled before going into a drying booth for the night. A drying booth is basically a foil-lined box with some UV lights and a hanger. It lets the varnish dry overnight (or thereabouts), so I don’t have to wait only for sunny days.
And since those windows face Main Street, it also means free advertising! 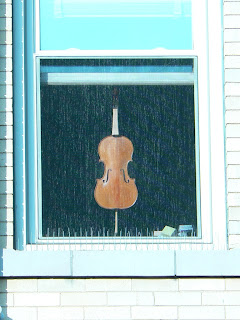 So there you go – step one down. A few more coats, and the violin will FINALLY be done. And then what? Well, I said before that I would start another one, but to tell the truth…
I really need to make myself a viola first.


Encounter with a Lady

So it’s (again) been a long while since my last blog – has it really been a year? It does seriously feel like time is speeding up somehow…

I have a confession to make. It’s serious, and it could be damaging to my reputation. Last week, unbeknownst to all of my friends and family, and even my wife, I had a romantic encounter with a lady. I’m forced to say that I’m not sorry I did it. If I have any regrets, it’s that it was in all likelihood a one-time occurrence. It’s almost certain that I will never see her again, and I won’t even have photos of our brief encounter to remember her by. But if I want to, I’ll be able to find pictures of her on the Web, close my eyes, and think back to the moment I first saw her.
Here’s a photo. You might recognize her – she’s one of the most famous faces in the violin world:

Those curves. Those eyes. That radiant, smoldering auburn coat. Not to mention the purfling!
As many of you know, the Nippon Foundation has decided to place the 1721 Stradivari known as the “Lady Blunt” at auction with Tarisio to raise funds for the Northeastern Japan Earthquake and Tsunami Relief Fund. This is historic, for many reasons; first, because of the generosity of the Foundation in trying to help their fellow citizens in this terrible time. But as solemn as the circumstances of the sale are, it’s historic for other reasons. This is a big deal, something that happens once in a generation, if we’re lucky.
The “Lady Blunt” is a crowning jewel of the violin world. One of the best-preserved Strads in existence, its almost untouched condition gives us a tantalizing look at the master’s hand with very little alteration. Violin experts far more qualified than I have already written about the provenance and significance of the Lady, so click here if you want to know about its journey over the last 2 centuries, tracing back to the workshop of J. B. Vuillaume (who also had the foresight to do the minimum amount of work needed to keep the violin in its amazing state). Instead, I wanted to give my impressions of the Lady through the glass case in the New York offices of Tarisio where I saw her ever so briefly last week.
In case you’re thinking, if this was so important, why didn’t he bring a camera, for crying out loud?!, I can only blame outright stupidity… and Staples. I stopped there to get a memory card for my camera because I’d forgotten to bring one from home, and I bought the wrong type of card, so when I got to New York and popped it in, my camera petulantly refused to work. But the images in my head are still pretty fresh, and hopefully they’ll stay that way for a while. That, and a few enterprising people on that other violin website have managed to be more technologically capable. But I digress…
The first striking thing I saw was the varnish. Charles Beare has said many times that the endless polishing and re-polishing of violins has, in his mind, permanently altered the way that some of the Cremonese instruments look, destroying the texture of the original  varnish and replacing it with a smooth, almost lacquered overcoat. Over the years, I’ve seen many Italian violins, and over and over again, the varnish was either polished within an inch of its life (a result of the aethetics of the last century and a half), or was better-preserved, but worn and thin in places. The Lady is different from all the others.  The varnish looks new, almost like it was put on recently. After seeing pictures like the one above, I was surprised to see how much more brown there is in the coloring, at least under everyday lighting conditions. But the golden undercoat, especially in the places on the Lady where there is some wear to the color layers, is fiery and shimmers with the changing angles of light.
The other thing I noticed was the woodwork of the master. It was still crisp! It’s something of a cliché to say that Stradivari was a meticulous maker, unusual for an Italian. He obviously was, with precise working methods consistently adhered to. But the genius of the man shows in that precision is never put above aesthetic. The violin is not completely symmetrical (as is the case with many other Strads and Cremonese instruments), and that ever-so-slight asymmetry gives an organic feel to the violin. And the ff’s, the arching, the edgework, the purfling all carry this same careful spontaneity. It gives the instrument the look of being strangely alive somehow; almost as if it would pulsate under your touch if you were to place a finger on it.
Am I waxing poetic? Maybe. But there’s a reason. As I said, I’ll probably never get to see this violin up close and personal again. And other than the “Messiah” of 1716, the Lady is the closest thing we have to seeing the original concept and work of the man who reached the pinnacle of violinmaking almost 300 years ago.
So I hope that my wife can forgive me this one indiscretion. It won’t happen again – unless the Lady decides to visit New York sometime in the future.