April 27, 2022, 1:12 PM · It would appear to be a miracle that vibrato doesn’t shake the violin. Yet, on closer observation, there’s a simple law that keeps the hand and the violin steady – even, balanced motion and controlled direction keep the violin from moving side to side. 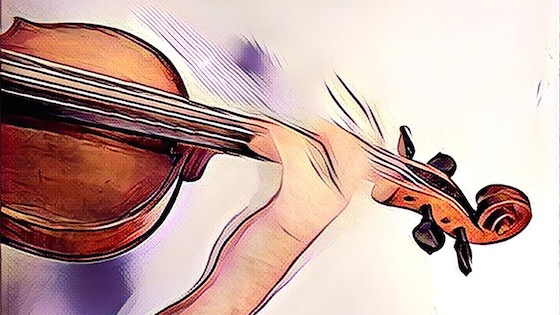 Some players may be concerned that how they grip the neck will cause the violin to shake. Actually, if the movement of the arm is even, the violin will keep more or less still. Firmly holding the neck with the thumb and the side of the first finger won’t rock the boat. It will even help stabilize the vibrato. There are far more important reasons why the violin will wobble.

How does vibrato cause the violin to rock around like an unevenly distributed washing machine? Violinists need to shore up the hand to keep it from tipping off the side of the violin. If the hand feels unbalanced, it will transfer its chaotic movement to the violin.

Here are the possible areas where the vibrato can be vulnerable and resemble the Leaning Tower of Pisa.

The Lower Foundation of Vibrato

How stable is the lower part of your hand when you’re vibrating? To achieve the quality of firm flexibility, here are three components that will keep vibrato on solid ground:

April 28, 2022 at 04:06 PM · Just how firm should your grip be, I was told it had to be very light and was also told to leave a verys small gap between finger and neck, going off all your amazing experience and playing I would value your advice if you would be willing to give some to a novice.

April 28, 2022 at 04:19 PM · I do release the side of my hand when doing vibrato, though I probably have a smaller hand than you do, Paul. I have mostly a wrist vibrato, with occasional arm. I would say my hand stays close, and it re-engages when playing faster notes, but for the vibrato there is a release. I wonder if there is variation here, based on the size of one's hand!

April 28, 2022 at 05:10 PM · Ron, I’ve noticed in my own playing that there is an alternation between pressure from the thumb and the neck, with many moments when there is a release of pressure. There are also many variations of pressure, from a lot to a little. The point is, everyone has their particular style for this “hand holding violin” relationship. What I find awkward and not necessary is the concept of having no pressure at all on the wood. It makes the violinist self-conscious and ignores the need for security.

Laurie, it sounds like you know what works for your hand and feel happy with the results. The proof is in the pudding. I think the size of one’s hand may create balance issues when spanning a full position on all four strings. However, when to press and when not to press is up to the individual player. I like the security of playing how I’m used to playing.

One other note, I don’t mean to imply from my blog that a good vibrato doesn’t shake the violin at all. Violins are not pianos and there is substantial movement from the instrument at all times. The blog’s purpose is to discuss the large amount of wobbling and slippage that may occur.

April 28, 2022 at 06:42 PM · Thank you very much for your answer, I do find that sometimes I am concentrating so much on keeping my hand, almost hanging in space that, I forget the vibrato itself, which suffers, in consequence.

April 28, 2022 at 10:20 PM · It took me six years to find the beginnings of a decent vibrato. It didn't happen until I realized that I was gripping the neck tightly between my thumb and the side of my first finger. It gave me a very stable hold, but it also locked my hand in place so that it could hardly vibrate at all. Learning to relax my grip just enough that my hand could move, while still preserving some sense of security, is something that I'm still working on.

April 29, 2022 at 02:12 PM · @Charlie I was taught that contact at that point is fine -- but pressure or gripping is not. It also frustrates shifting. I see students who have dents in their first finger above the base knuckle from the constant pressure of the violin neck at that point. All that becomes a little trickier if you play without a shoulder rest but there the concept is that the violin rests against the top of the base knuckle of your first finger, so the only pressure is the intrinsic pressure from the mass of the violin. You're still not gripping when you play restless.

May 1, 2022 at 10:30 PM · This subject definitely interests me. I started vibrato in my first year of violin lessons as a kid. My first teacher told me, about 3 months into lessons, that she felt I was ready for vibrato. This was about the same time she got me started learning the higher positions, beginning with 3rd.

My teacher was right. I was ready and took to both these elements of violin technique quite readily. But I don't rest on my oars. I keep working at it to stay in shape, as a player must.

You brought up two points that I will focus on here: 1) "Violinists need to shore up the hand to keep it from tipping off the side of the violin" and 2) "distributing the balance when changing strings."

Along these lines, I find that keeping the left-hand muscles well developed helps free up the vibrato. For daily practice, before I do any repertoire - or even scales - I first do a warm-up routine of about 20 minutes. After initial bow-arm warm-ups, I concentrate on the left hand, alternating between basic Schradieck-type finger work in 3rd position to open up the hand a little, then 1st position to open it up still more. I alternative a few minutes of these finger gymnastics with a few minutes of vibrato exercises. I make it a point to do both finger work and vibrato drills with each finger on each string in turn: E-A-D-G. By the end of the warm-up, I can vibrate well enough even on 4th finger sul G.