March 1, 2022, 9:55 PM · One violin teacher who was popular in the late 20th century had a particular expectation of his students – they were instructed to use as much bow as possible. If you contrast this technique with more typical bow distribution, it would be like comparing a sprinter to a ballet dancer.

I first became acquainted with bow distribution with the example of three beats on a down-bow, followed by one beat on an up-bow. 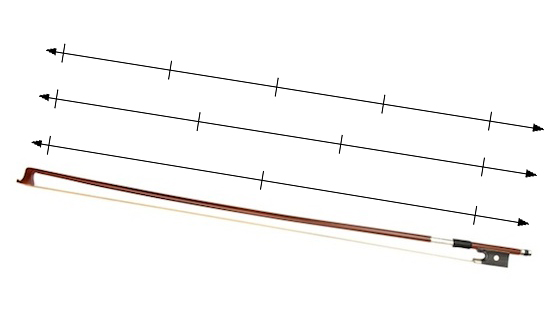 I made the mistake of taking it too literally. My long notes were too long, and the short notes were too accented. I needed to learn how to finesse the differences. I often ended up at the tip or the frog. I could get away with it when I sat in an orchestra, but I still felt the silent sense of disappointment. Little did I know that smaller movements of the bow were a lot more agile than lunging from the tip to the frog and back.

I thought about how the bow adapts to each measure, and how it resembles the musicianship of a conductor. Done properly, the bow's motion literally defines the pulse of the music. It takes into account the ebb and flow of the musicians, and forecasts any change in the musical landscape. Learning to hear what’s coming up, and organizing it with the bow, makes it obvious where the music is going. That kind of awareness is the mark of a leader.

Navigating the Bow Without Surprises

Sometimes bow lengths need to be different - so how do we change the bow distribution without creating jerky interruptions or blurry changes in articulation? Try working on two of the most important elements for bow distribution - planning for the change that is coming, and then smoothly changing the bow's direction in the midst of that change:

When you practice a particular bowing pattern, avoid the danger of falling into a rut and creating an inflexible habit in the way you play it. The same passage will feel quite different when you’re surrounded by musicians. In orchestra or ensemble playing, phrasing can take unpredictable turns, and you'll need to make quick adjustments.

Since orchestral music is 100% about blending, the mind is forever assessing what everyone else is doing. Whether you’re a leader or a follower, music requires us to be both. The follower can be as pro-active as the leader, but without needing to make decisions. The leader has a responsibility to forecast what’s coming up without interrupting the beauty and simplicity of the narrative.

A good leader listens for what is possible and lets the music unfold with common sense and integrity. At times, virtuosity will tempt the player into more adventurous bow thrusts. However, the basics of the bow are enough to satisfy the deepest urgings of the music. In order to feel the unanimity of the orchestra, learn how to match the general bowing character of your section. Leave the fancier stuff for your favorite cadenza.

"Exponential growth" would be a good way to define the relationship between a conductor’s motions and the bow energy of a string section. I watched the Beethoven 9th with Herbert von Karajan and the Berlin Philharmonic, and it was like a master class on the power of bow distribution. The orchestra generates its own heat, and then one word from Karajan ramps it up. The initial tonal makeup can be transformed by the section, while each player does his or her unique adjustment. Bow distribution goes way beyond mathematics; it’s a hybrid that encompasses sound, texture, and rhythm.

The first, and most important step, in coordinating the bow is knowing when things happen. The mind reacts best when limits are established, both through the ear and the eye. It reminds me of the finessing that happens when a quarterback targets the wide receiver.

I found an interesting exercise on YouTube that shows the subtle thinking that takes place at the last moment. It’s called "flashing hands," an action that the receiver signals to the quarterback after the latter raises his arm, just before the ball leaves his hand. In that split second, a slight turn of the hand can point the ball inches away from the original target. The defenders get faked out, all because the quarterback picked up the right signals. Flashing hands designated the target, and the quarterback reacted reflexively.

Our musical bodies are designed to make quick decisions. If you’re running out of bow, you learn the technique of getting the sound you need even with less bow. If you suddenly remember that you have the leading voice, you play more expressively. The bow responds to subtle signals, some of which appear like the conductor’s flashing hands.

March 2, 2022 at 09:11 PM · I have watched (a few times) the Bach Double performed by Oistrakh and Menuhin, as this performance is available on YouTube. And it strikes me as almost a contest to see which of them can use more bow for each sixteenth note. They're sawing away like madmen, like they'll saw their violins in half. Kind of comical and honestly I don't care for that performance at all.

March 3, 2022 at 07:30 PM · Dijana, Thank you for your suggestion. Capet was the teacher of Jascha Brodsky and Ivan Galamian. Galamian made it his mission to streamline the teaching of bowing and its many variations. The right hand has often played second fiddle to the left hand. That’s a misfortune, because a strong bow makes the left hand’s job easier.

Paul, I can see the advantage of teaching a child early on to use a lot of bow. It solidifies the technique because there’s less possibility of weakening the sound. However, the danger may be rhythmic problems and lack of flexibility.