Violin Technique: Staccato and the Challenge of the Bow

January 11, 2022, 11:29 PM · If you compare staccato notes on the violin and the piano, there are far more things that can go wrong on the violin. A pianist plays it with a quick impulse, a little anticipation and a slight accent. It’s the exact opposite of a sostenuto note. After one starts the note with emphasis, the resulting tone naturally tapers and finishes, as sounds are wont to do. It ends precisely before the next staccato begins, with both notes ringing and singing. 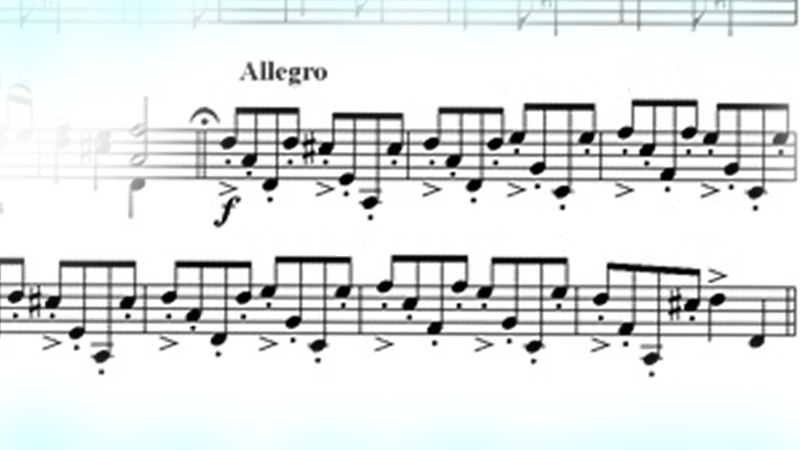 By being able to describe what we expect from a pianist’s staccato, it will be easier to see what’s missing when a violinist plays the same note. These four scenarios may likely occur because of the more unpredictable nature of the bow.

1. When the bow quickly strikes the string to initiate the staccato, a very dry sound may occur. This is because it’s necessary to be sure the string’s vibrations are fully engaged at the very beginning. It’s natural and logical that the start of a staccato is slightly richer and brighter than the rest of the note. All those bow hairs and the thickness of the string should be fully entwined. This is accomplished, oddly enough, by the hairs skimming the surface of the string. If the bow is too mired in the string, the vibration effect doesn’t take hold.

2. In the split second that engagement and beautiful vibrations take place, hair and string lock together to accomplish rich, continuous sound waves. The moment before the bow changes direction must be rich with sonority, lasting until the change takes place. It’s not a simple technique, because much can go wrong.

After the string’s engagement, the bow needs to glide through the vibration field of the string. I like to call this the “wake”, similar to a natural, liquid path generated by a boat. This seamless connection between engagement and wake must not be interrupted by lifting the bow from its depth in the string or pressing too hard without letting the string breathe.

3. There is a common mis-perception that equates staccato strokes with stopping before the bow change takes place. This can cause scratching or grinding sounds because the player is doing more than necessary. Do you change the pressure or speed inadvertently before changing direction? This may happen because you’re over-anticipating the change in the bow’s direction. Wait patiently for what’s coming up next, and finish the note simply and gracefully.

4. One of the most graceful motions that we do without a second thought is sweeping a floor. It teaches us all we need to know about the continuity of staccato and sostenuto strokes. If you’re inclined to stop the bow before it changes direction, you’re letting yourself fall into a trap. Instead of stopping, concentrate instead on finishing one direction with the bow and engaging and articulating at the moment after the change.

This seamless, sweeping movement may feel a bit odd at first, if you’re used to holding back, bearing down, and stopping the bow. The feeling is that of freedom of motion and controlling the natural flow of the sound. Pianists do it all the time; violinists have to create the same mechanics that pianists take for granted.

Staccato is one of those techniques which make you want to do the wrong thing. Even though it is a short sounding note, you can use a lot of bow. Because of the sharp attack, the tendency is to overwhelm the string instead of giving it room to fully vibrate. Finally, the shortness of a staccato makes you want to pull out of the string, when staying fully seated is better.

Staccato is a great example where counter-intuition wins out over doing something that may seem right, but isn’t.

January 15, 2022 at 05:10 PM · Great essay Paul! Keep 'em coming! For me, honestly one of the hardest parts of staccato is hearing exactly the kind of sound that I want in my mind's ear. I don't have enough experience with a broad spectrum of staccato sounds (surely due to the limitations of my technique) so it's hard to know even what I'm aiming for.

January 15, 2022 at 05:36 PM · Thank you, Paul. When I try to think of what to listen for in staccato or any other technique, I look for the naturalness in sound. Nature is so straight forward that it eschews descriptions in words or theories. I then work in a way that I remove what obviously is not natural: scratching, out of tune notes, lack of sonic presence. When I try to remove those things, natural tones start to take their place. Yes, it’s a slow process because it’s somewhat scientific and experimental. But the process gets easier.

No matter how different Heifetz and Grumiaux are, every sound is natural and perfect. I always look for what great musicians have in common, not what sets them apart.