Is Your Bow Hold Too Complicated?

September 28, 2021, 11:14 AM · The world of bow arms is split into two camps. There are those in which all the parts are working correctly, but the player has little knowledge of how he or she does things. Then there’s the player with an encyclopedic knowledge of every detail, angle, and weight. All things being equal, both camps are filled with experienced, successful players. Music rewards both types, since your subconscious knowledge is every bit as valuable as the well-thought-out variety. The main downside of the latter is that you can think yourself into a corner, setting up a bow arm that is so complicated that you could easily get bogged down.

Examples of how the bow arm can be over-explained are numerous, but a good place to start is the writings of one of the great violinists to come out of the Soviet Empire. Born in Odessa in 1906, Tossy Spivakovsky developed a complex theory about holding and moving the bow which would completely replace the traditional bow technique. This makes it very difficult to integrate one’s particular way of playing with some of his newer ideas.

Angles of finger, shape of hand, and how weight is applied are so specific that it’s doubtful that one could successfully absorb them. This creative approach served Spivakovsky well, since the most important aspect of a bow arm is how it serves the personal nature of the performer. The danger of such a novel approach, however, is how it can obstruct the growth of someone trying to copy it.

The Hyper-Construction of a Bow Hold

Spivakovsky spells out every possible detail in the treatise The Spivakovsky Way of Bowing, edited by Gaylord Yost. 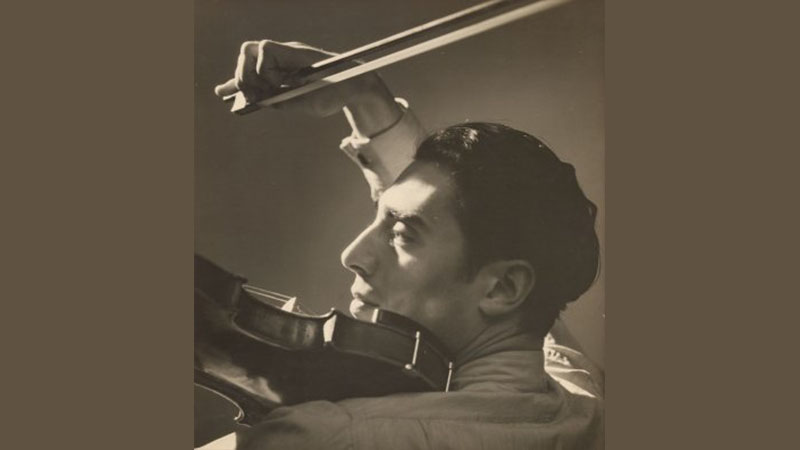 To keep the thumb straight, as Spivakovsky advocates, you have to find another way to merge the hand and the stick. He does find an alternative method, but the side effects are tension and the forcing of unnatural movements. The first, second, and third fingers are drawn up until the tip of the first finger rests directly on the top of the stick, the tip of the second finger rests about a quarter of an inch lower on the side of the stick, and the third fingertip contacts the side of the stick.

Exotic bow holds are so rare that they are fun to observe and take note of. I marvel at the human mind that can concoct such theories. I think it was a labor of love that made them do it. At the same time, a violinist should be very cautious of employing any of these methods which may work for only a few people. One of Spivakovsky’s ideas is to keep the knuckles of the bow hold parallel to the stick, which belies the natural slope of the knuckles. If you subscribe to even one of Spivakovsky’s deviations, you’ll have to contradict other laws of physics to tie it all together. In for a penny, in for a pound.

While a bow is one of the longest musical tools every invented, it is one the most elegant producers of sound. The primary thing that the bow asks of you is that you move it smoothly and horizontally. Breathing is optional, and violin sections tend to frown on loud inhaling. The engineering of a bow arm is similar to that of a conveyor belt – the job description is "always moving and never breaking down." All of this can be done with the usual hand position – the fingers resting over the stick like bangs and the little finger resting on the fingertip. All the variations that can take place are best designed by the individual for his own needs. When you copy someone else, it can feel like a foreign object that always seems incompatible.

Spivakovsky’s bow arm was remarkable in its colorful eccentricity. It also illustrated that, if a player’s musical and technical instincts are in sync, and his ear is fully engaged, any number of physical nuances and clunky Rube Goldberg designs can be made to work.

October 1, 2021 at 03:30 PM · Definitely eccentric and contrary. It only shows that there is not just one correct way to bow. Anyone who plays better than me can't be wrong. I knew a violinist in L.A. who had a severely deformed right hand. He had to invent his own way to bow. Having the 4th finger hanging over the stick instead of on top is standard Cello practice, but they are fighting gravity instead of using it. The straight thumb would prevent us from using the "thumb roll" technique to adjust the tilt of the bow.

October 1, 2021 at 05:11 PM · Joel, you answered one of my questions about why cellists hang their 4th fingers over the stick. I didn’t realize it was because of gravity. I’m just grateful that violinists get to place the fingertip on top of the stick. It makes holding the bow more secure for me. Having that localized pressure stabilizes the bow.

I had a teacher who asked me to hold my bow his way, which had a Tossy-like oddness. I politely said no. Another teacher convinced me to try her way for two years. I never could see its benefits, so I quit trying to use it. It was two years that would have been better spent refining my personal bow arm.