How a Levitating Train Can Help the Bow

June 21, 2021, 10:23 AM · It’s not uncommon to have many mixed messages telling the bow what to do. Gravity is certainly a part of bow technique, but so is gliding and lightly spinning the string. When one teacher says to “get into the string” and play close to the bridge, another says to let the bow breathe and to let the hairs absorb the string. The most positive thing I can say about mixed messages is that there’s a little bit of truth in each one.

A good way to unify all the messages is to create a visual image. Not only is a picture worth a thousand words, but it prevents those words from misleading us. I recently came across a type of train which describes the bow’s need to stay elevated when it changes strings. It even illustrates how lightly and effortlessly a bow travels. It’s the Maglev train, a masterpiece of engineering which doesn’t rely on wheels or traditional train engines.

The first paragraph on Wikipedia’s Maglev page explains it concisely and clearly:

“Maglev is a system of train transportation that uses two sets of magnets: one set to repel and push the train up off the track, and another set to move the elevated train ahead, taking advantage of the lack of friction.” For the purposes of visualizing how the bow interacts with the strings, this is not meant to be a complex physics lesson. It’s a reminder that the pressure that naturally happens when you move a bow needs to remain agile, elegant, and airborne. 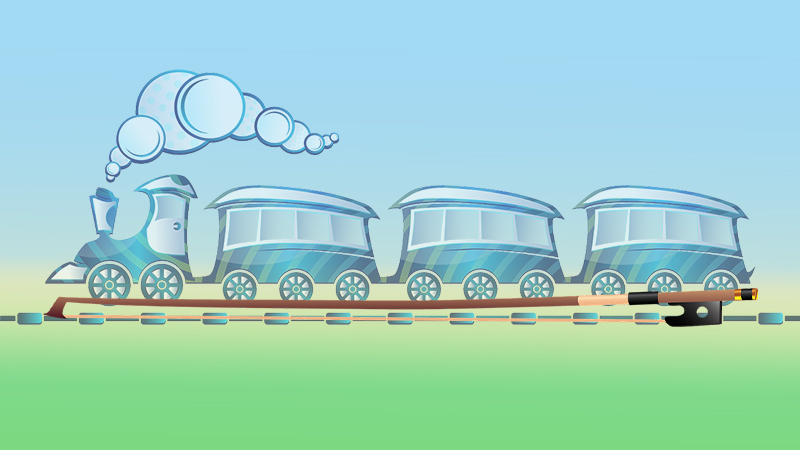 How to Ease Up on the Bow Pressure

If you’ve ever felt a heavy weight from the bow when changing strings, you’re not alone. It’s natural for the bow to drop onto a string with a certain amount of force. If the arm drops precipitously, you have a lot more downward pressure. If you want what’s best for the string, which is a movement that spins the string and creates vibration, you’ll have to minimize all that pressure. That’s when the act of levitating becomes an essential part of bow technique.

As you would imagine if you’ve ever watched a magician levitating an object, it’s more complicated than it looks. When it comes to the bow, remind yourself to pull away from the string the same amount of force that you’re putting into it. Also observe that when you change strings, have the bow in the proper plane of the string before the bow touches it. If the bow is still hovering around the A string when it needs to play the D string, the sound will be very thin.

Before removing unwanted pressure, it’s important to remember that some of it is absolutely necessary. A big part of bow technique is the familiarity you have with how you hold it and how you move it. Don’t throw the baby out with the bathwater. Once you balance all the forces, your bow technique will include the ability to pull away from the string while getting into it. The Maglev train shows the marvels of levitation, and violinists do whatever is necessary to keep the bow afloat.

Streamlining When You Change Strings

When I was a beginner there was an exercise for crossing strings which included very specific instructions. I discovered later there were several unwanted side effects. It advised me to have the bow touch the second string a moment before fully landing on it. In this process my timing needed two components, waiting for the moment of initial contact, at a slight angle to the bow, followed by the bow playing at the full 180 degrees on the string. Now I see that exercise was too particular and confusing. It was essentially a two-part technique which turned out to be unnecessary and prone to error. In retrospect, it wasn’t necessary to touch the two strings at the same time in order to cross strings.

I needed an exercise that relied on only one movement. As always, good timing and a sense of space would be important ingredients. The exercise begins with a solid count in your head or a metronome. The think in terms of a “full on” bow angle for each string, that is, without the bow slightly teetering between the two distinct planes. Touching the string earlier can throw off the rhythm, add confusion, and create a thinner sound.

The timing comes into play now. Once the pulse is set, choose one rhythmic movement to get from one string to the next. This helps you develop the important skill of spontaneous motion. Even if you overshoot the new string, you’ve experienced a movement you don’t want to repeat. Muscle memory, right or wrong, helps you in the future.

We all first learn to change strings with the whole arm, from the elbow, but there are plenty of times when that motion is too slow, clumsy, inaccurate. There are 7 string/bow levels; 4 single strings and 3 double-stops. The angles between them are quite small and the margin of error is very small when using the two middle strings. Quick string changes are best done with either the hand simply moving up and down, from the wrist, or, a pivoting motion inside the hand. The fourth finger is key; push down with the 4th to move to the higher string, or, release the 4th to let gravity pull the bow to the lower string. This works best in the middle section of the bow, at the balance point, or slightly below that point when doing "against-the grain" changes.

We easily forget the simple principle that the bow must stop for an infinitesimal moment before changing directions, and during that moment there is no sound. With training and practice that stopped motion can be coordinated with the string change. The bow does not need to lift and the weight/force does not need to be released. This is also true when skipping over a string, one of the many counter-intuitive things about this instrument. The hair stays on the strings. The elbow can move early, anticipate the string change. When that happens the hand appears to be moving in the opposite direction of the string change.

Whenever we change strings we loose a little bit of momentum; the half-inch space between the strings. Move the bow a little faster when changing strings.

June 27, 2021 at 05:32 AM · Thank you, Joel, for exploring the subtleties that help our big arms adapt to tiny gradations between strings. It’s remarkable that some violinists barely move the elbow during string changes while others, quite successfully, move the arm like an airplane through space. Viva la difference. I’m just glad we don’t teach children anymore to hold a book between their arm and their body when they move their bows.