Using Hymns to Practice Double Stops Technique on the Violin

March 2, 2021, 11:41 AM · When I introduce students to double stops on the violin I hope it will be pleasant for them, that the strings will blend and the fingers will find their half and whole steps. This is a big milestone, and after months of playing only melodies, harmony instantly deepens their experience, if all goes well. Double stops present several challenges, but I can remember one book that stood out in particular. I don’t ever wax philosophically about Wohlfahrt or Kreutzer, and I don’t get chills thinking about my debt to Sevcik for learning muscle memory. However, when I found the music in which double stops and hymns merged, I wanted to sing its praises.

Marilyn Carlson arranged Amazing Grace, My Faith Looks Up to Thee, and 10 other selections in Hymn Tunes for Unaccompanied Violin(Mel Bay, 2005). There is a certain beauty that is part of sacred songs which makes double stops more inviting to play. While exercises that introduce thirds, sixths, and octaves help develop the independent fingers, they don’t motivate the bow arm and the ear like a poignant hymn. 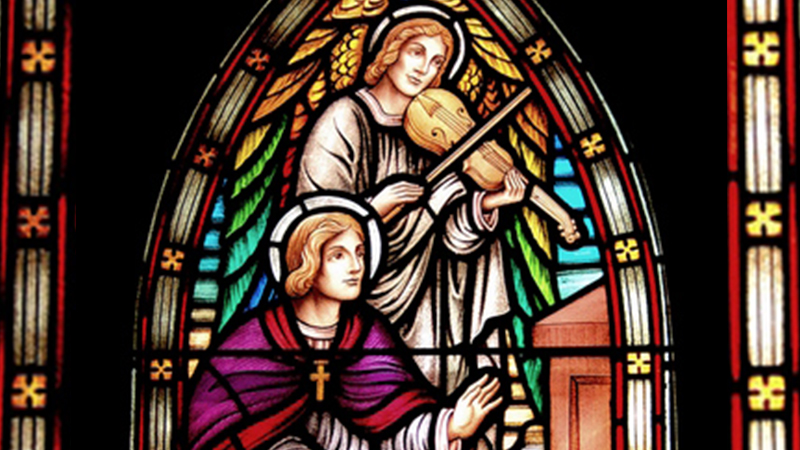 The last hymn in the book is Wondrous Love, a melody in William Walker’s Southern Harmony, 1835. Carlson arranged it into a Fantasia, evoking the serenity of hope and love, followed by a quick dance of joy, ecstasy, and rich harmonies.

Carlson is active in musical ministry in churches, nursing homes, and retirement communities. A native of Seattle, she was raised in a musical home. Starting piano at the age of six and violin at the age of nine, she played in school and community orchestras while growing up. She holds degrees in math and musicianship and was employed at the University of Washington Medical Center.

Balancing the Bow on Two Strings

Often, when you work on double stops, the right hand plays second fiddle to the left. Hymns level out that disparity, because they’re meant to be expressive and to be played with deep sonorities. The bow arm is more likely to play a significant role, and when truly inspired, take the lead. The left hand will appreciate that.

As the bow is the ultimate in vulnerability and randomness, here are a few suggestions to keep it balanced and dependable during double stops:

Amazing Grace has an even mix of double stops with one open string and intermediate-level fifths and sixths. You would think that fifths would be the easiest of the double stops because you use only one finger, but it takes practice to place the finger exactly square with the fingerboard. There are two steps to learning how to play fifths in tune:

If you’re looking for a maximum workout for the brain, playing double stops in tune will fill that need. Going from thirds to thirds is like a cumbersome four-part experiment. Aren’t all experiments cumbersome by nature? You have to measure space intervals and think about them in time intervals. This leads me to believe that it’s excellent training for a scientist, and that it takes the mind of a scientist to be a great musician. I would love to know where Einstein would have stood on this issue.

It can get rather complicated because the mind needs to hear the individual notes in the double stops while they’re camouflaged. As soon as you hear an out-of-tune chord, leave your fingers where they are, and play each note separately. It will be clear which notes are out of tune because ear memory is such a reliable tool. The confusion comes when you don’t separate the notes in your ear. Being patient should be built into the tempo,. Take a moment in-between each observation. Slow and steady evaluation becomes the groundwork for a quick musical mind.

March 3, 2021 at 03:37 PM · The book you reference sounds like a great supplement to the old standards of double stop study - Trott Melodious Double Stops and the Polo double stop studies. Thanks for making us aware of it!

March 3, 2021 at 04:28 PM · Matt, thank you for bringing up Polo exercises, which I had never heard of. The two Trott books are classics. They’re tuneful and add the complexity of double stops combined with phrasing and rhythm. I just read a very long bio of Josephine Trott. (Great thing to do during a pandemic.) She helped create the Denver Symphony, now the Colorado Symphony.

Thanks to Paul, Ann, and Diana. May the fourths be with you.

March 3, 2021 at 09:50 PM · There are also some great double-stop arrangements by Martha Yasuda: hymns, Christmas music, wedding music, American melodies and more. You can find them here.

My biggest obstacle to playing fifths was tactile - I realized that I'm used to feeling the string in the middle of the finger pad. Despite the fact that it makes no sense to do so, I was still trying to somehow feel both strings in the middle of my finger pad, or at least to feel something in the normal place. Then I realized, if I'm doing it right, I'll just feel the fingerboard in the middle of my finger pad, and two strings on the sides. When I became "okay" with this new sensation, I could then figure out how to tune the fifths and to play them stronger and much more consistently in tune!

March 3, 2021 at 11:56 PM · Laurie, your diagnosis is very interesting because it’s so specific to your own experience. I can totally see why it would improve your double stops. It seems like something you would have had to figure out yourself. I imagine most teachers wouldn’t think about it.

Has Suzuki ever come out with a double stop exercise book?

My brain has never embraced just, or non-tempered, tuning. Maybe in my next life. I like the “if it sounds in tune, it is in tune” method. I’m so happy that tempered tuning works in every musical situation, as well as in matters of double stops. From what I understand, most string quartets are fine with tempered tuning.

One of my issues involving double stops was not measuring intervals for each note. I wouldn’t take the time to play the bottom note in tune, then the top. Another thing that helped was learning which notes I played wrong over and over. I could predict what would happen the next time. My most cherished possession is my history of mistakes.

March 6, 2021 at 02:46 AM · My teacher also advised me to lighten finger pressure more than what seems instinctive for fifths. When you press harder you're just making it harder by distorting the shape of your fingertip.

I don't think there is a double-stop "book" for Suzuki but I believe there are individual exercises interspersed in the various books to develop double-stop technique. I think for most teachers the Suzuki repertoire series is just a framework and other material is woven into it. That "Malodorous Double Stops" book seems particularly popular. I used "Developing Double Stops" by Whistler when I was a child but my teacher was rather unskilled as a pedagogue and it wasn't until returning to the violin that I came to understand just tuning. The best/simplest description that I have seen of just tuning is in the videos created by Kurt Sassmannshaus.