February 20, 2021, 6:04 PM · Does spiccato seem like a risky bowing? Are you more likely to crack the sound and shatter the string on impact rather than bounce on and off the string elegantly? Since playing off the string is part of a violinist’s bread and butter, learning how to trust it and rely on it is up there with playing in tune and shifting well. Some bowings, like a fast up-bow (or down-bow) staccato, you can take or leave, depending on the degree of virtuosity you’re aspiring to. On the other hand, spiccato is worth pursuing.

I was in middle age when I realized my techniques would not be described satisfactorily by any one method. The step-by-step processes that chess players learn do not exist in music, not in the cold realities of technique nor in the aesthetics of musicality.

A manual for spiccato wasn’t available, and it also wasn’t what I needed. Instead, I had to figure out how to bounce, engage the string at the moment of the bounce, and revert to detaché without crashing. When I entered the world of spiccato, my detachés weren’t even all that hot. So I needed to do some remedial training to shore up that technique. It turned out to be a slow learning curve, but with positive results.

I had a default spiccato that I could sort of depend on, but it was full of faults. However, it was good enough to start grafting improvements on. Why throw the baby out with the bathwater? These were the changes I needed to work on:

On my first day of introduction to spiccato I used the “sink or swim” method. Fortunately no one has ever died learning it, but I floundered for years. My first mistake was letting the bow fall straight down, rather than at an oblique angle. To achieve that I needed to have two landing plans, one for the upbow and one for the down. My tendency was to use the same for both, which is like thinking that walking forward and backward should feel the same. 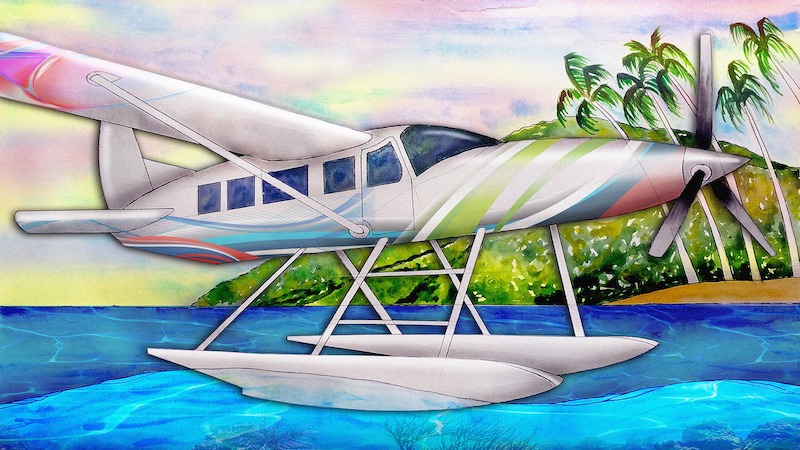 Just using the word “planning” is half the battle. It takes a moment of thought to enter the string at an angle, and another to get the arm ready to enter it in the other direction. While it’s quicker, and It takes no thought, to drop it straight down, crashing and splattering are the results. My favorite demonstration for trajectory into a fluid object is the seaplane. The plane’s landing gear is elegantly designed to enter water gracefully and forcefully. The seaplane has inspired me to think about movement and angles.

An important ingredient that helps synchronize the arm and the bow is making sure that the rhythm is set firmly. One thing I love about the body’s relationship to music is that a strong sense of the beat makes them work better together.

It’s the faster notes that tend to be played with spiccato, and knowing the tempo in advance will help the notes sound crisp and clear. The pendulum of spiccato may feel vulnerable: after all, your bow is in the air and the string is somewhere below. However, being able to switch easily from quarters to eighths to sixteenths will give direction to the bow and bring the arm into coordination with it.

Practice hearing the different note values in your inner ear, and then add other rhythms to give them context. In other words, hear the quarter notes while you’re primarily thinking about sixteenths.

When I first learned rhythm, there was a beautiful simplicity about hearing a quarter note divided into three or four parts. Then rhythm felt more complicated by awkward bow distribution, shifting and sliding, and the deadly spiccato virus. But when all is said and done, I revert to the rhythm in my ear that I learned as a child to guide me and give boundaries to every technique.

Landing on the string after spiccato needs preparation, caution, and attention to bow speeds. When you first learn to retake the bow, a downbow followed by another downbow, you learn to create a sostenuto quality immediately after the retake. This is what happens when spiccato ends and detaché strokes begin. Here are ways to prepare for that:

February 23, 2021 at 01:04 AM · Laurie came up with that beautifully painted seaplane. As far as the analogy, strings remind me of water. Phyllis Young has a wonderful book called Playing the String Game with lots of helpful images.