The Bel Canto Bow - The Technique of a Singing Violin

February 2, 2021, 1:37 PM · Music is one of the wonders of the world that make writers create poetic and visual images. It’s right up there with the Grand Canyon and the concept of love. The bow and the violin are often described as an extension of the arm, and the sound they create is as close to the human voice as possible. 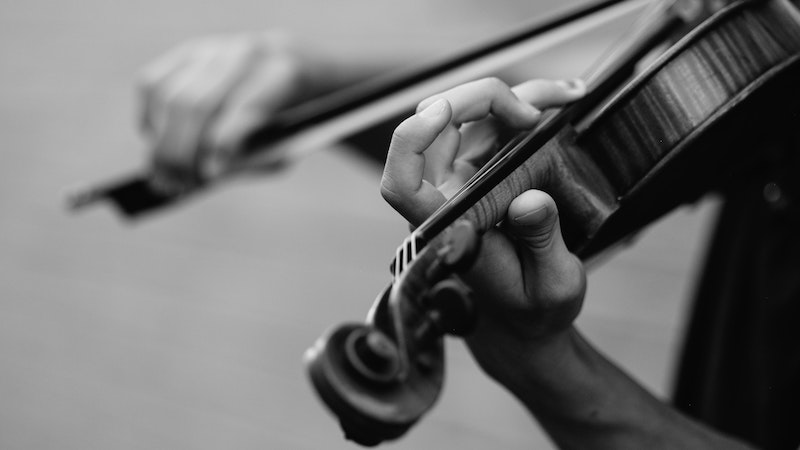 Singers often strive for a style known as “bel canto” that prevailed in Europe in the 18th and 19th century. The legato and phrasing are delivered with silken elegance, purity, and nobility, and they are featured in operas by Bellini and Donizetti. The more dramatic style of singing, one with a speech-inflected style, is more likely to be heard in Puccini and Verdi.

Beauty of sound may be the most coveted quality for violinists, but its success can’t be dependent on a simple explanation. Words of description, such as “play near the bridge”, “get into the string”, “don’t press” are good for basic training, but they end up being helpful in some situations, and barriers in others. To get the right ingredients with the right balance, the music and the musician set the parameters one measure at a time.

The clearest picture I can come up with is that beautiful sound and cascading phrasing are a product of many small parts: seamless bow changes, strings that vibrate fully, phrases that thrive on subtle dynamic changes, and string crossings that enhance new registers of the sound.

Improving your ability to change the bow’s direction starts with being able to look forward to it with confidence and certainty. One of the most demoralizing things is fearing the bow change because with it comes scratching and bouncing. If the technique is based on something the player understands, he’ll be more likely to keep the sound flowing and feel sure about his method.

The art of bow changing is more physics than art and requires a lot of concentration. You make sure the sound is pure and consistent up until the moment of changing. Counting carefully up to that moment insures that the bow will change exactly when you intend it to. Then the following stroke will need to engage with the string so a perfect vibration is created, exactly at the beginning of the stroke. Also, concentrate on keeping the speed of the bow consistent, which will keep it from bouncing. A surprise and unexpected speed is the hiccup of violin playing.

What I find magical about the bow change is the fact that the string stops at the moment it changes direction. The audience doesn’t hear the gap because it happens so quickly and the sounds before and after it are designed to belong to each other. There is a sleight of hand quality and aural illusion that is attached to this technique, and the final result is endless phrasing.

The Bow’s Dilemma - Fighting Gravity AND Going with It

If the bow could be designed with a support system like the Monorail at Disneyland, I would have paid anything for it. The tube that a trombone slide travels in would also be a welcome tool. Anything that would support the bow would more likely insure a smooth ride and sound.

Of course, making the bow mechanical would have plenty of downsides, including a lack of expression and nuance. There are really two jobs that the bow must do to get a strong, lyrical, and velvety sound:

There are two camps of sound production in which strong philosophies are associated. There’s the violinist who has such a strong personality that every nuance and glissando serves to display his character, and then there’s the violinist who seeks the music’s meaning and prevents any personal affectation from interfering. In a class by himself was Arthur Grumiaux, born to a working-class family, who debuted in the U.S. in Boston at the age of thirty. His phrasing would allow a melody to unfold with gentleness and innocence.

The Strings of Nat King Cole

One of the pleasures of being a classical musician is the huge encyclopedia of sounds at your disposal. Some of the greatest musicians around the world play for movie scores and fill the orchestras backing the finest popular singers such as Barbra Streisand and Frank Sinatra. Listening to the beautiful arrangements and state-of-the-art recording techniques teaches tonal beauty and phrasing. If you tend to phrase by playing the first thought that comes to your mind, a few moments with Nat King Cole will inspire you to set the mood before the fingers go down.

February 3, 2021 at 02:39 AM · Paul, Thank you for this post. I'm still at the stage of eliminating bouncing but this gives me a good idea of what I want to do eventually. I'd never heard of the Kreisler Highway!

February 3, 2021 at 04:49 AM · Ann, It’s nice to look forward to creating new phrases on the violin. When I listen to a great musician, they make it clear as to what they’re doing and how they’re phrasing. They give us something to aspire to.

February 3, 2021 at 08:26 AM · Another essential ingredient (reached only by the select few) for a continually singing melody in Grumiaux style is a fourth finger vibrato that is as good as the other fingers vibrato (Paul you know I am obsessed by 4th finger vibrato ;-)

February 3, 2021 at 04:11 PM · Jean, who isn’t obsessed with their 4th finger vibrato? The key to the fourth finger curse is the third finger. Fortunately I never used one of those springy exercisers that guitarists use to strengthen each of their fingers. Poor Robert Schumann paralyzed one of his hands when he used a hand stretching contraption. At least his lack of judgement warned future generations to not make the same mistake.

February 3, 2021 at 05:30 PM · Weird realization I've had recently-- while fooling around with gut strings and trying some better bows (some very old, some from the very top tier of today's crew), I am suddenly remembering instructions that my teachers gave me when I was a teenager. Just the act of avoiding car wrecks that can result from more sensitive gear requires responses that are hard to teach, but lead to better sound.

Now if only we could give every 12-year-old a Tourte to use on her Strad!

February 4, 2021 at 12:32 AM · As a singer and violinist, I particularly loved this blog. And hearing Nat King Cole! His delivery of that beautiful song is truly a master class in the art of how to spin a phrase. Thanks for bringing this great singer into the violin world for just a bit! (And those strings behind him? Luscious!)

February 4, 2021 at 01:05 AM · Stephen, I would imagine working with gut strings would be quite an education. I bet the newness of it makes you have to think and respond quickly.

Diana. I wish I could have been a singer in my lifetime. I’ll have to admit, though, that I couldn’t help but sing that song after I heard Nat King Cole.

February 4, 2021 at 03:07 AM · I've had several reasons to think on this problem. Most teachers of a certain generation were trained on gut strings (sometimes unwrapped gut, but otherwise Eudoxa-ish things), and lived in a time when good French bows were much easier to find. Not that $2,000 was pocket change then, but you didn't have Japan, Korea, and China snarfing up what had once been postwar America's domain in European collectibles.

So they learned to hear and think in certain ways. Those do translate to modern fittings, but are much easier to pick up when you aren't using Pirazzi and carbon fiber bows.

February 4, 2021 at 05:23 PM · Thank you Paul for this post! It looks like lot of people are interested in the exchange of ideas on topic of 'bel canto' in violin playing. Considering that we are all teachers I would like to share an insight on a historic treatise that actually gives us practical advices on how to teach 'bel canto' in violin playing. It is Charles de Beriot's Method in three parts in which Part 3 is completely dedicated to the development of style and execution (not translated in English so I virtually translated it with Google Translator with the help of French speaking friend). De Beriot's wife was a famous soprano Maria Garcia whose father was a famous Spanish tenor and one of the most admired vocal pedagogues. So likely influenced by them, in this third part de Beriot attempted to adapt vocal pedagogy concepts such as diction, syllabation, prosody and other aspects of 'bel canto' to the bow. To understand Grumiaux continuous vibrato one needs to start with Lambert Massarat (Wieniawski's and Kreisler's teacher at Paris Conservatory) as he was the first one who liberated violinists' tastes towards such vibrato.

February 4, 2021 at 06:15 PM · Dijana, I appreciate your knowledge of the history of DeBeriot, his wife, and Bel Canto style. I imagine DeBeriot himself was a very expressive violinist. I wonder if Charles Dancla figures in to this idea of teaching expression, because of of his two volumes of Airs Varies. Anyone who composes variations on opera arias must have some ideas about Bel Canto.

February 4, 2021 at 08:32 PM · a simpler way to think about the ideal bow pressure, speed etc....Obviously the bow hairs have to make enough contact to pull the violin string. Too little pressure , the string isn’t grabbed well and you get a swishy sound. Too much, and the bow constricts the sting vibration and it sounds harsh, crunchy, etc. The goal is to find that happy medium between the two.

February 8, 2021 at 12:29 AM · Thanks Paul. Your choice of Nat King Cole as a singer is brilliant. The most beautiful quality of sound, natural technique, and, uncontaminated by faulty vocal instruction.

I have been fortunate to have had both good violin and vocal teachers, and I have noticed a lot of analogies. None of my teachers ever said " just play/sing louder"! That doesn't work! Instead we get projection and perceived volume from efficiency and balance. Bel Canto = spun tone ?

For Violin we try to get just the right combination of bow speed, force, and point of contact. For voice it is air flow, support, and placement.

The big difference between the two is that violin can be completely analyzed and taught as mechanics. But most of the vocal mechanism is outside of our conscious, front-brain control. A good vocal lesson will seem really weird to an instrumentalist. The teacher will use subjective, illogical trickery, mental imagery. Then the feedback loop from our voice to our ears is faulty. No one hears themselves the same way the listener does.

The best results happen when we think of the meaning of the text instead of the mechanics of singing; notes, syllables, diction, even breathing. "Don't think,-just Sing"!

February 8, 2021 at 06:52 PM · Joel, your last paragraph sums it up very well. It is indeed difficult to start with knowing what sound we want. But it’s fun to do it for one measure, planning the sound and then the fingerings and the bowings. The mind gets accustomed to this kind of practicing, and soon you get more used to this pattern of thinking.