December 13, 2021, 12:22 PM · Your practice room is like a science lab, only filled with music - and hopefully good lighting and a good, solid stand. This room's importance cannot be exaggerated - it’s the place where discoveries are made and music builds bit by bit. Whether it’s about a change to a very small detail or the birth of a sudden self-discovery, moments of clarity never come without some kind of experimentation. 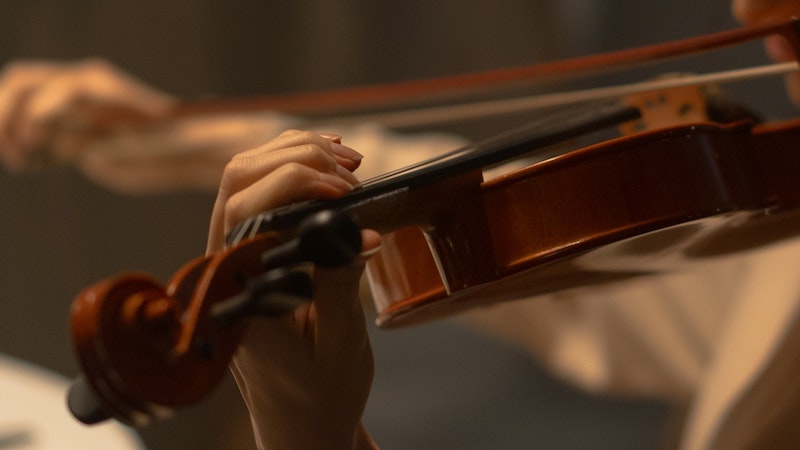 Something as simple as picking out a wrong note may not be simple at all. Your playing is the sum of its parts, and upsetting the apple cart will make the parts slightly shaky. How do you manage the balancing act of keeping your overall playing intact while taking apart one thing at a time?

If you work productively, little details get solved one at a time, and then you gently work them into the big picture. A good place to start is by using your ear to tell you what to work on. As we listen, we may pick up a note that’s out of tune, or rhythms that aren’t evenly spaced. The ear learns to not only notice small imperfections that can be corrected, but also accept and appreciate the passages that are going well.

Mistakes have a way of avoiding correction, however. It’s not so easy to fix old habits because they’re encased in muscle memory. In a split-second an old habit will come rushing back. So the will power you summon up to isolate imperfections is an integral part of the practice mindset.

Of course, that sounds simple. But most of us have a tendency to stop listening and keep barreling ahead. The antidote to that is preparation: thinking and hearing before the bow even touches the string.

When several wrong notes pop up in one measure, on can correct the problem in a relatively short period by playing smaller sections and thinking of every note. Unfortunately, nothing moves faster than a finger with no thought behind it. Lacking a plan, it comes up with one of its own. Let’s say you’re playing a fast run and you incorrectly land on third finger instead of open string. Whatever the reason you landed on the third finger, it repeats itself over and over because of the miracle of muscle memory, which remembers everything, both the good and the bad. So, you have to dig yourself out of it.

Music and Science – The Art of Observing Change

When you’re getting ready to rid yourself of a wrong note or dynamic that you’ve repeated many times, you have to prepare for it just as you would for a science experiment. That is, keep everything the same, but change one variable. Remind yourself to be patient, be ready for a slower pace of thinking, and follow these steps:

Practicing with Change in Mind

Your practice session should never be dull; in fact, it should a three-ring circus. Juggling two or three things at a time will keep you from being bored, as long as you find closure with each of the details. Even something as seemingly robotic as repeating a measure several times with the right rhythm and dynamics will strengthen the muscle memory.

Don’t worry if, after working on a small detail, you forget it when playing through the piece. It can take a while to incorporate the change you have made. The fact that you worked on it and polished it means that it is there, just waiting for you to remind yourself to play it correctly again.

The moment you polish the detail in the practice room is one of the most rewarding experiences you can have. It may not be anything earth shattering, but a personal discovery shows that you are deeply aware of a piece of the musical puzzle. In a world in which the musical plan is often decided by the conductor or a teacher, there’s still room for what you can do on your own.

* *
Sometimes a song can be just the thing to motivate you. If you’re a fan of Stephen Sondheim and Barbra Streisand, here’s a little something from Sunday In the Park with George to remind you that Putting It Together brings boundless joy.

December 14, 2021 at 09:23 PM · I'm living this right now. I always thought that trying harder would get me where I needed to go. The truth was that I need to slow down and solve issues one at a time. I'm still working on looking at mistakes as problems to be solved and I don't always know what I'm doing wrong... just that certain passages should not be as difficult as they are. I have an observant, encouraging teacher who is a great help. We had to pretty much start from scratch, but I feel like we are filling in and polishing a lot of basic shortcomings.

Scott, never has there been a truer statement than your comment, "just that certain passages should not be as difficult as they are.” The difficult part is to not be distracted in pursuit of fixing something. Even a little thing like doubt and uncertainty can mess up a shift. I’m glad you have a patient and thoughtful teacher.

December 19, 2021 at 04:51 AM · I suppose that all of our technical problems could be dissected into discrete, simple motions, but for us ordinary mortals, at least the males of the species, we can really only think of one thing at a time. My other nemesis is velocity. A lot of orchestra and solo parts run by faster than I can think, sometimes faster than I can even hear.

December 19, 2021 at 04:09 PM · I hear you, Joel. I experience the factor of how much I can take in at any given moment. Whether it be speed, what I’m hearing, or how much expression to put in, it’s often a matter of choosing my battles.

Galamian includes his acceleration exercises in his scale book. I have to remind myself when I go from 8ths to 16ths not to squeeze the beats faster.

Speaking of thinking of one thing at a time, here’s a quote from Dictionary of Theories by Jennifer Bothamley. It makes me realize that music, like reading, is about fragments. It’s called the “sausage machine” : ...in analyzing utterances for comprehension, people divide sentences into parcels roughly 6 words long, and hypothesize the structure of that segment before moving on to the next “sausage”.

I breathed a sigh of relief when I read that.