Chamber Music Camaraderie - How to Maintain It

January 7, 2021, 12:28 PM · One of the most amazing, magical qualities that classical music enjoys is the ability to hold itself together. The self-sustaining mechanism consists of a steady beat and players trained to play their notes within the beat. The ear notices the change in dynamics and naturally adjusts. Changes in tempo during a rubato section, when the tempo ebbs and flows because of the music’s character, are structured in a predictable manner. Without these examples of music’s predictability, it would be a virtual free-for-all.

The same rules of engagement apply to chamber music, but there are no traffic cops to keep everyone in their lane and going at the same speed. With so many variables at play that can throw things off, it helps to bring a sense of humor to the rehearsal. 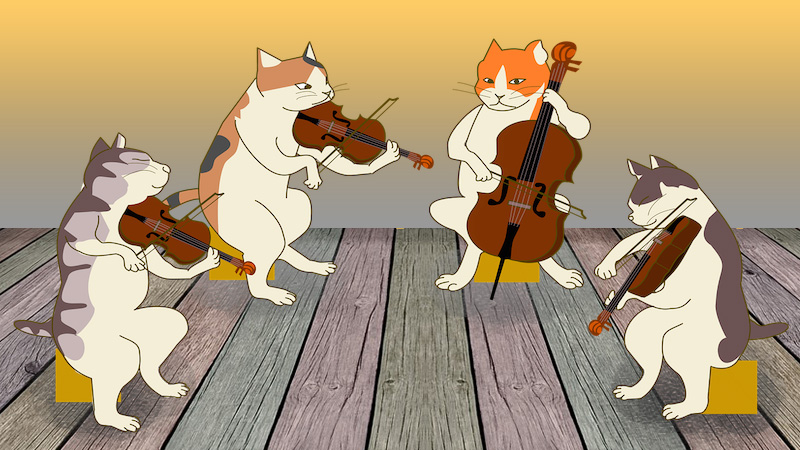 There can be a sense of dynamic energy if the players feel secure and bold. What to avoid at all costs is a session of hurt feelings and micro-management. When an ensemble works, there is a mutual respect that encourages each person to state their opinion about only things that can change the context of the music. Like politics, music is the art of the possible. There is also sensitivity to which subjects should be avoided.

Two things come up regularly in a chamber music rehearsal: maintaining the status quo and introducing new tempos, articulations, and dynamics. A few “unwritten rules” can promote a positive atmosphere.

It’s hard to describe the types of relationships and hierarchies that exist in ensembles. There can be an appearance of a democracy, but leaders and followers can emerge and work together in a symbiotic fashion. While the leader has the responsibility to keep things civil and positive, each player needs to do his or her part to avoid getting bogged down.

There are enough nooks and crannies in music to keep everyone happy without needing to get into control issues. The naturalness of music doesn’t lend itself to rote interpretation, but expediency and basic human nature can lead to someone just trying to get his way. Leadership should not be confused with taking over.

What To Look Out For

The key to keeping things civil is to keep the music together. What orchestra playing taught me is that, even when things on stage felt different and awkward, it amazed me that they still fit together. Little differences of opinion don’t undo a performance. Certainly, personalities may actually outnumber the people in the orchestra, and they are bound to clash. A wind player can find fault with the intonation of three of his colleagues, but the audience only hears perfection. The Rube Goldberg effect is alive and well in classical music. The method might be confusing and complex, but the outcome is still the desired one.

There are players that will, knowingly or inadvertently, throw a wrench into a rehearsal. The most damaging outcome is when they slow down or speed up, and then blame others for not following the tempo. Such behavior cannot be rewarded or encouraged. It is not easy to deal with, because the basic nature of most musicians is to be good, cooperative ensemble players. Two possible remedies: the leader says to stop rushing, or if it’s the leader who’s manipulating the tempo, two or more of the other players ask him to stop. It’s not an easy remedy, but it’s quick.

I find the relationship between leading and following within chamber music fascinating. It has to do with the music itself, that if a proportional and organic structure is set up by the leader, the rest of the musicians feel a liberty to play happily and at their best. The opposite of brow-beating, a leader who simply states the music will get a more positive response and freer sound. When the other musicians work out their own intertwinings, the leader finds a way to blend them into the whole fabric.

As musicians have learned to expect, the ear always has the last word. Every member of the ensemble is hearing the exact same thing at the same time, and that’s the clue to what comes next. Of course, not everyone will agree on what he’s hearing. Is there a truth that can replace many different opinions? In music, not likely. However, each player can refine his knowledge and strengthen his musicianship. A chamber music group give the opportunity to define the sounds that it is producing. The more they can be described, with their textures, dynamics, and emotional content, the better a musician can navigate within the group.

January 8, 2021 at 04:51 PM · As a professional psychologist (and amateur violinist), I really appreciate the sensitivity, insights, and focus on relationships, leadership, and group consensus of the above. Great job.

I am reminded of the story of Johannes Brahms, who had a reputation for not always being easy to deal with. At a performance of one of his chamber pieces, the violist came up to him and started trying to butter him up. He asked Brahms, "Did you like the tempo?" Brahms replied, "Yes, especially yours."

Anyway, keep up the good work. Especially this month, maintaining good working relationships everywhere is an ideal that has a far higher level of importance than it ordinarily would.

January 8, 2021 at 05:57 PM · Thank you, Sandy, for that wonderful story about Brahms I had never heard. So much about musical knowledge can be learned by studying it through psychology and understanding human interaction. Speaking of rhythm, your story reminds me of Debussy telling musicians that no two measures have the same metronome marking. I don’t think he would have had kind words to say about Toscanini.

January 8, 2021 at 06:15 PM · Paul: Thank you, in turn, for your comment. And I hadn't heard that about Debussy, and he certainly wouldn't have appreciated Toscanini (among others).

When I was in college (in the early 60's), at a rehearsal of the college orchestra, we were rehearsing Mozart's Musical Joke. In that passage with the French horns playing thirds out of tune, one of the orchestra members asked, "Is he making fun of playing thirds?" Our conductor responded, "Yes, they're playing in turds."

Yes, there's lots of room for humor. And let's make sure we make room for it these days.

Excellent column. I found reading "The Ill Tempered String Quartet" to be both humorous and insightful.

Any human endeavor that requires coordinated activity is difficult, but so rewarding when it all comes together.

January 9, 2021 at 11:43 PM · Thank you, George, for your book recommendation. Here’s another that combines music history and the makings of a great ensemble: Beethoven For a Later Age - The Journey of a String Quartet by Edward Dusinberre, 1st violinist of the Takacs Quartet.