Stage Fright and the Bow Arm

September 21, 2020, 12:30 PM · No matter whether you call it stage fright, concert nerves, the shakes, or butterflies, it is a condition shared by numerous performers. One very accomplished violinist said she was so scared that she couldn’t feel her feet touch the floor when she was performing. A cellist said that losing a lot of weight helped him deal with it.

Another violinist had a difficult time transitioning from his youth as a prodigy to his adult life on the concert stage and in recordings. He experienced something common to many violinists, a shaking bow that would disrupt any hope of control. 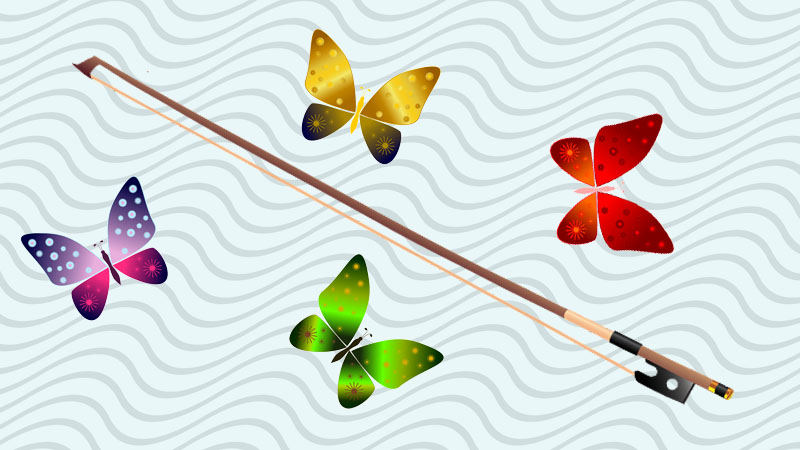 Yet he persevered because of his deep love of music and his desire to communicate with his audience. Such stage fright is the extreme kind, and it stems from a combination of negative thinking and, in my case, insufficient understanding of how the violin and bow work.

It was my bow arm that took the biggest hit when I experienced stage fright. It was as if I had two different bow arms, one that worked well most of the time on an unconscious level, and the other that lost all strength, direction, leverage, speed, and all the other actions I took for granted. When those disappeared, rather quickly and suddenly, it was inevitable that the bow would begin to bounce. After all, it is a floppy, aerodynamic object that needs guidance, direction, and thought. Without the proper ingredients, the system breaks down in strange, but expected, ways. Veering from a straight path and bouncing out of control are the side effects of a long, sometimes unbalanced, stick of wood.

To have the bow work one moment and then suddenly lose control of all functions made me search for answers. I realized from these two contrary thoughts that I needed to understand my bow arm better. While I tried to use relaxation techniques and humor to minimize the threat of the bow malfunctioning, I still needed as much ammunition and knowledge as I could muster to handle the bow before it devolved into random bouncing.

While the amount of leverage changes with each moment that the bow moves, you should strive for a feeling of leverage that adapts naturally to wherever the bow happens to be. I call it “neutral leverage” because the changes are so infinitesimal that only a subtle, sensitive control will work. It barely deserves to be called leverage, but when the hand is clear to the right, and the tip way over to the left, it sure looks like a lever.

Sharing Experiences and Knowledge With Others

Knowing that others share this affliction has helped me deal with stage fright. Even though I would experience it while standing alone on a stage, I knew it was shared by many. However, my process of dealing with stage fright unfolded over many years, and it was layered with details and discoveries. I have a feeling that many who have experienced it did a lot of specific work and soul-searching. I think we can learn from each other. I always appreciate when a player shares his own strategy, even though it may or may not resonate with my particular needs.

You never know what you’ll learn. In the end, we are all different, complex human beings. One violinist shared his personal breakthrough in his fight with stage fright. It was a very spiritual and religious reckoning, and it didn’t surprise me that very deep convictions would be used in his fight. Sometimes the roots of stage fright run deep, and each should be dealt with whatever means are available and with whatever works.

While trying to understand how the violin and bow work together, there is no one right way. There is only the way that works for the individual. Sometimes it may be so unique that no one else will share the same strategy. It’s the ongoing quest and the search for understanding that helps to stem stage fright.

September 22, 2020 at 01:12 AM · Paul, I left off an obscure term for stage fright. It’s flop sweat. Now we’re getting into much less appetizing terms. I prefer malts.

I did find this, however,while I was trying to find the Yiddish translation. It’s the gold mine of stage fright terms.

The more you can identify a problem, the better you can deal with it. I find translations help in their own way.

I feel uneasy doing yet another response to someone whose resume is two leagues above mine, but here I go again:

Nathan Cole's video on the topic reminds us that the bow Wants to bounce. the stick, the hair, and the strings all act like springs, especially in the middle. What is frustrating as a teacher is when the student can't do a controlled spicatto; the hand interferes.

Fix #4 Develop the sensation that the string is holding the bow. This is easy on the lower half of the bow on the G and D strings. The E string is tricky because it is very stiff and slick and the bow is almost vertical, pushing sideways.

#6 The right shoulder is all the way down, relaxed. It doesn't appear to do anything.

#8 The music culture, the context, is the biggest component of stage fright. My worst nerves were for an audition committee of 3, but playing amplified solo violin in a jazz band for an audience of thousands was no problem.