Finding the Groove: Channeling the Most Vibrant Sounds

August 4, 2020, 12:16 PM · My first memory of the violin was the beautiful sound I heard on my parents’ record collection and on the radio. There was something captivating about the vibrato and the dynamics reaching an intensity and then calming down. I realize now, when I listen to music, it’s the first thing I notice. The depth of the music resides in the warmth of the sound. While the piano fills my soul with the harmonies and textures of ten fingers, it’s the violin’s strings that rise to a far more expressive level. Multiply that tenfold when vibrato is added. My primary concern is keeping the channel through which the sounds travel open, gushing, and flowing. 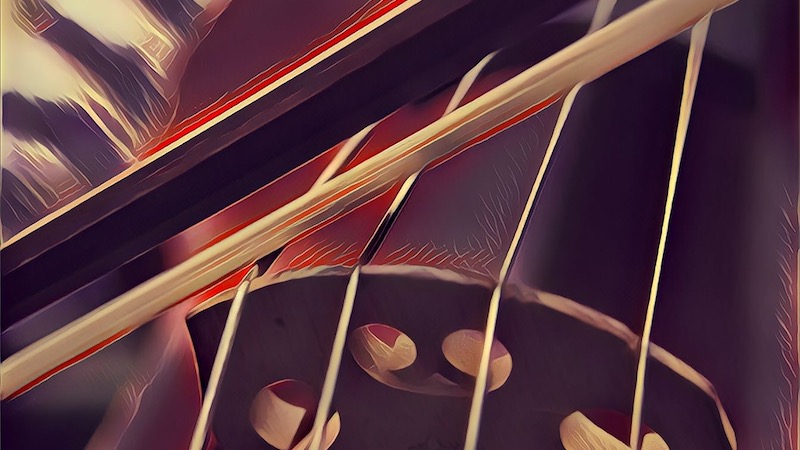 Playing With a Full, Warm Tone

There are several moments when violinists need to be sure that they’re playing with warm, vibrating strings. Changing from one string to another and changing bow direction are frequently the cause of weaker sound. Knowing where to be especially diligent will insure a more rounded, beautiful tone.

My technique consists of what to do and what not to do. My own experience has taught me that old mistakes and habits don’t die; they just lie in wait. Starting with the positive approach of what to do to insure success, I’ll begin with “A” followed by the caveats under “B”.

A. Short detaches require a re-engagement of the string each time the bow changes direction. The most reliable way to do that is with a confident sense of the beat, so the bow, the arm, and the left hand are in sync.

How does the hair start the string to vibrate? It has to attach itself in a natural way, not by force, but by patience while the unlikely duo couples. During the learning process, take as much time as necessary to gently engage the string on the upbow and the downbow. If you’re used to grabbing and forcing, your mind is revved up and going too fast. When you’re full of excess speed, patience may take forever, but it only seems that way.

A term popular with woodworkers –“tongue and groove” - thoroughly describes the engagement of the hair and channeling of the bow through the string.

As you can see from the photo, the joint is strong and secure. I like the musical reference in which tongue refers to the tonguing that wind and brass players do to create consonants. It is a striking similarity to violinists’ articulating an accent or consonant. It also refers to engaging the string at the start of each bow stroke.

B. Finding a wide, comfortable groove in the string will create lots of vibrations. However, if the arm is tight, it will be difficult to find where the groove is. The hardest part of this “groove” technique is allowing for enough “give” so that the strings can breathe and not be suffocated. The groove can be as shallow as an infant’s footstep or as deep as the lowest level of a trampoline. If the path and the groove are clamped tight, the sound will be tinny and dry. It’s especially noticeable when the bow changes direction. Don’t overdo the leverage of the bow in the upper half. It should be just enough to maintain a balanced and beautiful sound.

When changing the direction of the bow, let it find its natural path. If you try to perfectly imitate the path of the previous bow, it will make it so narrow that the sound and the motion will feel squeezed. To establish a path that’s not constricted, start with a straight bow, then give it a little bit of free play. There’s a technique for learning a straight bow and a technique for learning a natural bow path. Learn to know the difference. The gravity of the strings lets the bow move out of the straight path, more or less.

Our Strings are Vocal Chords – Let Them Breathe

The unfolding of a phrase is one of man-made nature’s miracles. To make sure the strings expand and contract during the phrase, they should breathe under the weight of the bow. What allows that to happen is the simultaneous bow weight into the string accompanied by keeping the bow light enough to avoid dead weight. The language of the bow is a constant trade-off between vertical and horizontal. Ultimately, horizontal prevails because it will make the string spin.

August 6, 2020 at 06:39 PM · I love your mention of the trade-off between vertical and horizontal, and that the horizontal ultimately prevails. Often, when my tone goes bad, I realize that I've been focusing more on the vertical, which results in too much weight and not enough motion across the string. At that point I remind myself that the important thing is to make the bow move horizontally across the string, and to only add enough vertical (weight) to make it sound.

I'd like to question your final words ("make the string spin"), though. Could there be a better word than "spin"? That makes me think of the torsional vibration I often get which results in a harsh, high-pitched sound. I'm still trying to figure out exactly what causes this so I can avoid it.

Charlie, I’m curious what you mean by torsional vibration. When I get a harsh sound, I observe a very pathetic attempt by the string to barely vibrate. I’ve always used the terms spin and vibrate interchangeably. Spin conjures up loggers spinning logs at competiiions. The term has worked for me, but I can understand how it might not for others.

August 7, 2020 at 09:29 PM · By "torsional vibration" I refer to the string twisting back and forth in place, rather than vibrating from side to side. This occurs at a much higher frequency than the normal vibration we're trying for. It's believed to account for the "whistling E" phenomenon.

A web search for "torsional vibration violin string" will bring up a number of articles on it. (It's been observed in other areas as well, e.g. the drill chain in oil and gas wells.)

I'm not sure whether this is exactly what I'm encountering, but the effect I hear occurs on lower strings (e.g. D) as well. It's relatively stable; once it happens it usually persists for the duration of the bow stroke.

So yes, your "log spinning" analogy is quite apt in this case - but we want violin strings to vibrate from side to side rather than spinning in place.

August 7, 2020 at 11:33 PM · Thanks for the explanation of torsional vibration, Charlie. I watched a few videos on YouTube showing a close-up of the vibrations of a violin string. When I play I can hear when the vibrations are less than ideal, and the result is squeezed, non-continuous vibrations. When I see and hear good vibrations, I observe full-throated, freely oscillating movements of the string. Based on my less than rudimentary knowledge of physics, I observe not side-to-side movements, but a full range of 360 degrees.

That being said, I try to engage the string at the beginning of every stroke, thereby starting with a healthy vibration. Then I concentrate on not interfering with the gliding groove that the bow is in. Last but not least, I remind my bow that, when it’s entering a new string, it should take into account the thickness of the string.

I'll be a little simplistic. For detache', which I call "plain vanilla" sostenuto playing, the bow goes down-up-down-up, and, no matter how well we finesse the transition with shock-absorber finger-action, the bow Must stop for an infinitesimal moment. The natural instinct is to let off on the force during that moment, then the bow hair(the rosin) looses traction and control. This is only a problem going down-up, near the tip. The trick is keep the leverage on during the break; there will be a little clicking sound, unpleasant white noise to the player, but to the audience it just sounds like a clean attack on the next note.

As for the best tone quality, we want the maximum amount of fundamental, and let the overtones just happen. I have read that the optimum point of contact is about 1/9 of the vibrating string length. No one calculates that but good players instinctively learn it by experimenting and practice. Too close to the bridge does not engage the fundamental, too far from the bridge suppresses it. jq

August 11, 2020 at 12:28 AM · Thank you, Joel, for discussing the idea of fundamentals and overtones. I find it fascinating that violinists can play with so many colors. As fast as purity of sound, the Cleveland Orchestra plays so uniformly and focused that it enhances the intent and the depth of the music.