Amid 30 Teachers, Teaching One's Self

July 19, 2020, 5:20 PM · Yesterday I counted the number of teachers I had on the violin and chamber music, including master classes and youTube videos, from age 8 until 65. The total was 30. Some teachers during my college years tried to radically changing something, while others stayed away from such a daunting project. Nonetheless, I had a responsibility to take ownership of my playing in such a way that good ideas would be integrated and bad ones blocked. Now that’s a daunting project for an eighteen-year-old, and no way was I up to the task. 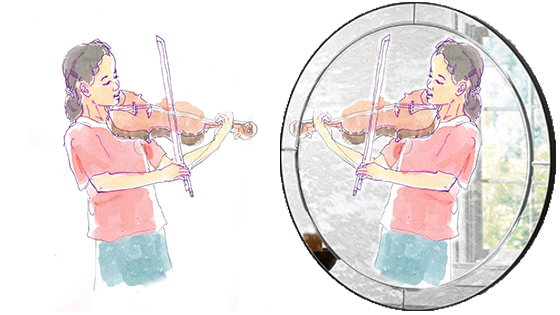 There were essential ingredients in my playing that I needed to recognize, nurture, and not take for granted. I see that now as a full-time job. Instead, I was so busy learning new concepts that directly contradicted what was already working for me.

Fortunately, I never encountered the high school or college teacher that said I needed to completely overhaul my playing from the G string up. I’d like to think I would have said emphatically “no”, but I did go along with some very strange, unwarranted methods. At least I didn’t restart. I had an instinct to hang on to the things that were working.

Saying "No" to Certain Remedies

For instance, one dramatically different approach took up all of my concentration, so there was nothing left to devote to the music itself. It entailed removing my shoulder pad and not letting the violin touch my shoulder, even during shifting. (The teacher that asked me to do that was the kindest, most empathetic teacher I had. That didn’t lessen the damage.) If you want to turn your violin playing on its head and take away all positive, tactile reinforcements (or security blankets, if you will), I can’t think of a better prescription.

I spent two years trying to play without a shoulder pad, basically ignoring my inner voice saying “It’s not a security blanket to hold the violin securely. Trust your instincts.” Fortunately, my inner voice waited patiently until I was ready to listen to it.

What kept me going while the unsolicited remedy of not wearing a shoulder pad threw a wrench into my technical system? What keeps any of us going? The joy and power of doing something well carried me through the darkest of times in which technique meant awkwardness and frustration. At the end of the tunnel was a belief that the violin was easier than it appeared. Where did I get this belief? My inner voice was alive and well, even if I wasn’t listening to it.

Technique Flows When the Phrase is Free and Easy

Finding the ease in playing starts with hearing the music as if technique were not an issue. My best practicing in college came about when I wasn’t encumbered by new techniques which were at odds with my style. My playing was better when I was gathering the forces of motion, momentum, and pitch to streamline the process. For instance, shifting was easier if the music was elegant, spirited, and full of vitality. Because I took for granted the energy I had when playing in orchestra, it was all too easy to lose it when I was in the practice room. What I needed was a surge of power and thrust to counteract the sluggishness. This rhythmic propulsion helped focus my thoughts and judgement. That would help me better gauge the distance that needed to be shifted and assess the amount of time I had. I liken the musical mind to a pinball machine – it may be fast, but it’s fun to follow the progression of hits and misses..

I needed to observe how my mind worked while I was practicing and performing. The pinball machine image ratcheted up my thinking processes. As I got older I appreciated the effectiveness of keeping my mind in sync with the music. It was an elegant and simple concept that I knew was true, even if it could only come up in a conversation with myself, not with my teacher. A teacher’s job is to provide parts of the whole, and a student’s job is to connect the dots.

A Bow Hold That Makes Sense

To reach a truly natural state of holding the violin, holding the bow became no less significant. As I navigated the different theories, I came upon many plausible possibilities. The only truth I arrived at was that they can’t all be right. One said the pressure on the stick comes from the index finger, another the middle finger, and down the hand until the pinkie. Among some teachers, the wrist became a popular source of weight. Theories by nature are compelling, so it’s hard to resist trying them all. The more outlandish the theory, the more exotic they become. Like a conspiracy theory, there’s something appealing and addictive about them. Ultimately, I throw the theory away, and wonder why I wasted my time.

I have tried to know the difference between an abstract theory of bow usage and the common-sense approach, which I believe gets better results. There is no limit to the number of theories, and some of them derailed me for years. Music is so pure and beautiful that it’s no surprise it can be accompanied by thoughts of great logic and truth. What a wonderful world we live in that allows us to improve and grow, while hearing such sublime sounds.

July 21, 2020 at 01:41 AM · Thank you Paul Stein for this reflection on 57 years of playing violin! You encourage me to have faith I too will eventually make music. Patience and confidence, we must be our own best teacher and learn from everyone... though not always the lesson they meant.

July 21, 2020 at 02:59 PM · Will, I really liked how you summed up your thoughts about the benefits of learning something from all teachers. It reminds me of the adage of a father’s advice to his son, “Do as I say, not as I do.” With teachers, it’s the opposite, since talking about music is fraught with misunderstanding. Do as I do, not as I say.

Let’s keep soldiering on! The fight is worth it.

July 22, 2020 at 05:48 PM · Victor, I wonder if this phenomenon of reverse images applies to pianists. Nevertheless, it is very off-putting. At least with our years of experience, we’re prepared for it. I remember the first time I noticed it I just scratched my head and wondered what was going on.

July 22, 2020 at 11:48 PM · I really appreciated this article! And I found it fascinating that it came out around the time of Claire Allen's post, which dealt with conflicting teaching techniques. I loved reading the perspective of one who is in the midst of grappling with the issue, and one who has come to terms with it.

July 23, 2020 at 03:32 PM · Diana, Reading your comment drove home the fact that v.com offers many different points of view. Here there is also a fairness and sportsmanship among the readers so that ideas can be distilled rationally and with humor.