June 12, 2020, 10:34 AM · Nature is full of complexities that can be reduced to a formula. The earth predictably revolves around the sun. A windmill can harness energy. E=mc squared. String players depend on the slow practicing of passages, which in turn produces fast, even fingers. What’s the secret? As sure as day turns into night, the rhythmic mind is nurtured by a specific set of tasks, performed in an orderly sequence.

Every great technique needs a monitoring system. Will our ears pick up uneven spacing? A checklist for rhythm reminds us what to listen for, like extra wide gaps between notes, awkward dotted rhythms, and waiting at bar lines.

What we learned as a beginner is the mathematical purity of duplets and triplets. Keep it simple, because playing with others may pull you in many directions. We’re all affected by ensemble playing, nerves, and expressive rubato (AKA ebb and flow, in which one beat feels a little longer than the others.)

If you throw a wrench into that formula, your dotted halves may be shortened, or two quarter notes become expressive half notes. A few deviations here, a few mishaps there, and pretty soon our beloved formula has all but disappeared. 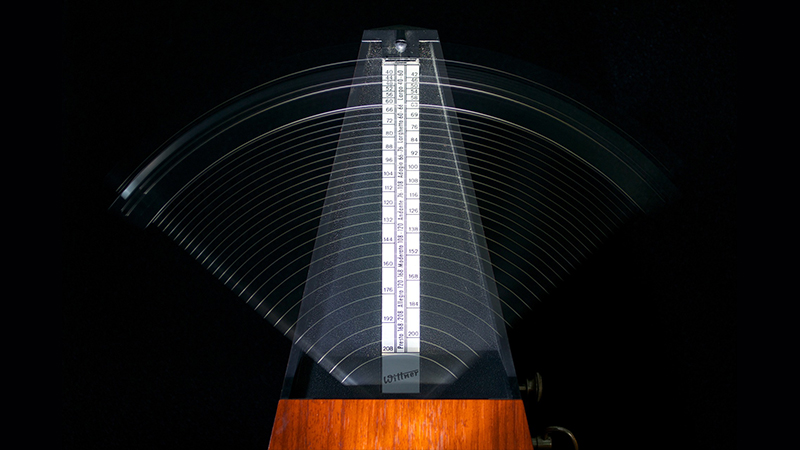 Anticipation - Factoring in the Rhythm of Momentum

Let’s take a moment and sing the praises of orchestras for their contribution to our rhythmic growth. Forget the annoying stand partner and the long boring spells when oom-pah second fiddle parts lasted two pages. Orchestras, and their attendant conductors, lock in a sense of rhythmic security. Without them, it could have taken many more years to develop.

Let’s harness what we learned from the art of anticipation. When we looked up at the conductor and saw a pair of eyes intensely locked into the phrasing, something took hold in us. When the tempo slightly moved forward, morphing what we had practiced into something a little more directed and more dynamic, we took note. Why hadn’t we made those changes when we practiced before the rehearsal? Maybe we will the next time we practice. The little disparity between how we prepared a phrase and how we actually played it in orchestra gives us lots to think about.

To prepare a phrase is to highlight the essential elements – dynamics, rhythmic relationships, and most importantly, the overall proportion of the rhythm. When you listen to someone talking, you’ll notice that the slowing or speeding up of his pulse makes perfect sense. While speaking is easier to produce than music, music is easier to quantify because it has rhythm values such as quarter notes and dotted rhythms. The great lessons musicians learn from speaking will help them with phrasing. Hint: predictability, or rhythm’s inevitability, makes music simple and powerful. Something out of the ordinary is overkill.

Find the phrase’s proportion early on in the practicing. If something bloated gets in there, it will take more time to remove it than it took to put it in.

Riding the Waves of Rhythm and Anticipation

When we play music, we’re getting lots more than just emotion and the chance to experience the composition of a genius. We get the thrill of rhythm and the rush of musical change coursing through our bodies. Why does a great performer take the simple proportion of a phrase and change its contour ever so slightly? Because she knows the DNA intimately and can change it to create a new emotion while maintaining its integrity.

Becoming adept at rhythmic variations opens up a new world of musical flexibility. Whatever a conductor throws at you, you can re-arrange your thoughts and play a new version of the phrase.

Practicing these few steps will help you perfect the art of rhythmic change:

The Formula Works for Ensemble Playing

Aren’t we lucky that the naturalness and inevitability of music fit so nicely into a formula? That there is a correlation between slow practicing and the display of fast virtuosity? Could Richard Strauss’ Don Juan and the Scherzo from Robert Schumann’s Second Symphony come off with such excitement if the formula wasn’t nurtured in each of the performers.

Whether the tempo is steady or changing metronome marks in a heartbeat, the formula is there for the security blanket that it represents. While a conductor may deviate from that formula for a moment, the musicians will make do. The formula allows for that as well.

June 14, 2020 at 01:41 AM · Thank you for sharing this helpful advice. During my last lesson, my instructor referenced rhythmic integrity and I'm working to improve, and will now implement the four steps you've outlined. Thank you!

But getting back to rhythm, once you've learned to feel it in a piece, the next step is to communicate it with others. If you have good eye contact with your fellow musicians, you can ride out ritards and rubatos beautifully in sync.

June 17, 2020 at 09:43 PM · You always have a wonderful gem! In this case, it was: "If the passage sounds good to your ear, but feels bad, chalk it up as a win. These are exercises for the ear, not the hands." The notion of letting the ear create the rhythmic win, as opposed to the hand, is new for me and has been quite transformational! I'm hoping now the hands will come along for the ride.

June 18, 2020 at 01:03 AM · Charlie, thank you for help with the HTML. I look forward to trying it. Good suggestion about eye contact for making tempo changes. I think it’s a little difficult to learn. When you see jazz players and classical ones look at each other, it’s a thing of beauty. Right before you look up, you gotta make sure you don’t mess up. Any suggestions?

Diana, I think if my hands ever talk to me, I hope they’ll say “thanks for the ride.” Thank you for your poetic contribution.