May 25, 2020, 12:38 PM · We’ve all heard the saying "music is an international language," and that idea might be applied to our early instruction, when it comes to the bow. 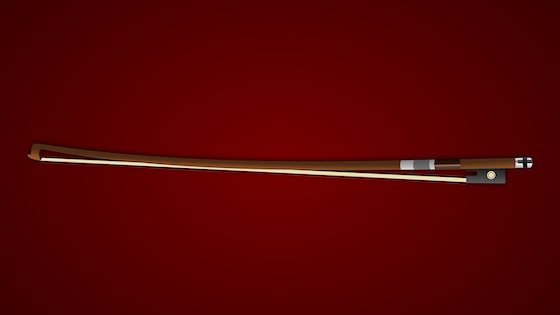 No matter the language, or whether it is spoken in a matter-of-fact or creative and whimsical way, the same rules apply, when it comes to the bow:

Just to be clear, these words of wisdom made a big difference in my playing. They were a starting point, giving me a large degree of form and foundation when I was eight years old.

When it came to the short and articulated notes known as staccato, however, I needed a different set of rules than those for the smoother detaché bowing. I always did what came obviously to me, and that was my first mistake. My staccatos were short, all right, but not the right kind of short. This was my litany of staccato woes: Too short of a bow; stopped abruptly right when I was supposed to change direction; started abruptly; finally, the beginnings of the staccatos resembled neither vowel or consonant. I believe that takes a certain type of talent to create something with no musical value - which is what I had here. Clearly, I needed to do the opposite of everything I was doing.

The gentle beginning of the detaché bow and the suddenly explosive nature of the staccato are vastly different -- so one place to start is to treat them separately. Yet all too often, one bleeds into the other. Here are a few guidelines to make your staccatos lively and spontaneous.

Count with confidence so you can start the staccato totally synchronized with the beat. Your motion and your rhythm should ignite at exactly the same time. If there’s a half note or fermata before the staccato, subdivide (divided longer rhythmic values into shorter ones), so you’re not left with a big gaping hole of silence. A common mistake is not factoring in the anticipation, without which music would have the energy of a flat tire. Anticipation is to music as speed is to a tennis ball. Your bow, or racket, needs to be ready not just earlier than you expect, but with more energy and strength than you think is needed.

What sets apart the staccato from a detaché is a quick snap of the string, similar to a pianist striking a key with a sudden accent. Such a stroke must never be late, but may be pre-emptive in nature.

The Etude #3 in Kayser’s 36 Etudes, Opus 20 is excellent for timing a series of staccatos, without needing to play sostenuto notes as well. Be careful not to play the 16th notes too soon. Make all the notes staccato; it’s easy to forget and make the up-bows longer, sounding like detachés.

Here’s a variation: To improve the skill of timing the beginning of each note, stop at the end of each measure. Then, after counting one quarter note, proceed with the next measure. With the bow in the air during the rest, you can work on your re-taking skills. (This is the technique of playing a down-bow, raising the bow, then playing another down-bow.) Land on the string confidently and be ready to quickly pull the string.

Sweep, Don’t Screech to a Halt

Changing bow direction with staccato strokes can be simplicity itself. (I’m trying to start this discussion on a positive note!) In describing the bow change, the down-bow ends calmly and without ceremony. There is no accent nor any sense of stopping. There is not even any hint of the bow changing its pressure on the string. Be careful not to lose the connection between the hair and the string during any part of the stroke.

The job of sweeping comes to mind in describing a series of staccato notes. Get the broom out and observe your freedom of motion, equal distances left and right. All sorts of musical gestures are demonstrated in sweeping – natural rhythm, opposite motions which feel perfectly compatible, and no stopping when changing direction. My favorite similarity between sweeping and bowing is the slightly quicker movement at the beginning of each sweep, followed by a microscopic diminishment of speed. Our sounds have a way of tapering ever so slightly, pleasing to the ear like the human voice. I love the way Mother Nature shows herself in little things.

As I said, simplicity is the goal. However, music has a way of reminding us that nothing simple comes easy. If your nature makes you lose the connection between the hairs and the string after a staccato, use will power to prevent that. Once you keep the hair connected, even if it feels unnatural, the reward will be a better sound. Simplicity is the art of doing something that makes sense. Your arm will be less tired when your bow is not randomly going in one string and out another.

The hardest thing to teach, or even elucidate, is the moment that the string is engaged. You can’t have a discussion about staccatos without addressing the need to start each one with a warm, beautiful sound. What the player should not abide is scratching and delaying. Instead you should expect the richness of a singer forming a consonant, which then evolves into a vowel. Otherwise you’ll hear when the staccato starts with a scratch. It happens so fast, so suddenly, and just at a time when you could have used a boost in your confidence.

To get a clear picture of how important the engagement is, know what to look for. Observe that you’re waiting to hear the true vibration of the string. Trust it will happen, that it will take place in a moment that is spacious as well as immediate. It takes concentration, patience, and anticipation. Since a faulty connection is usually preceded by rushing, do the opposite. Frame the downbeat in your rhythmic mind, and feel free to use the image of conductors shaping the beat with their hands. Also, rushing is invariably linked to impatience. Instead, be patient and know that good timing unleashes the string’s vibrations in real time, not forced time.

Our Own Personal Stories

In a world where music is defined by each person in his or her own way, the art of engaging the string and playing staccato are subject to many interpretations. For some, the understanding of it takes place quickly because of an innate sense of how nature, physics, and sound interact. (They’re likely not even aware of it. It’s all taking place subconsciously.) An agility at trial-and-error can produce good results quickly. For others, there is a quest to discover what the artist knows instinctively, a worthwhile endeavor. As long as we share what we know, the hope for getting clean, beautiful sounds from the violin remains alive. So now, here are the rules for making staccatos clean and scratch-free:

Rules for a Clean, Strong Staccato

I have always thought that staccato was a series of individually attacked notes played in one bow stroke (commonly up bow) without the bow leaving the string. Violin staccato that is; I am well aware that wind players and pianists have their own interpretations the term.

This just goes to show how little we agree on common terminology in this violin playing business.

May 27, 2020 at 02:07 PM · I usually refer to any short note, with a quick initial thrust, the term staccato, and that stands apart from notes that are legato or sostenuto. A staccato with sharper accents would be marcato or martele. The series of short notes in one bow - I refer to them as upbow or downbow staccato. It would be nice if they had a more colorful term. They’re usually an incredible display of technical fireworks. I just call them boutique technique.

May 30, 2020 at 09:32 PM · Thanks Paul S., for another good read. Each note has three parts; attack, sustain, release. For the singer that is the consonant, then the vowel, then a close which is either a consonant or vowel. For the singer, it is technically more difficult to start or close on a vowel. The violin staccato would be like the hard consonants [k, t, p,]. The trick is to always stop the bow, energize the bow in the tiny rest, before a hard staccato. I think of triggering a mouse-trap. The energy is stored in the spring, released, moves at one moment. Our dot [.] notation causes some confusion. sometimes its just means that the note is shortened, not full value. And then off-the-string [.]aka spiccato, sautele, is something different entirely.

May 31, 2020 at 11:18 AM · Thanks for the helpful mouse-trap imagery, Joel. Rhythm plays an important part in staccato. The snap of the trap is a great way to get the ball rolling. Every detail you mention is a vital component of staccato. Of course, it all happens in one brief moment. And changing one little detail makes a big difference.