Rhythmic Rainbow - How Violinists Can Stop Rushing and Slowing Down

April 10, 2020, 2:02 PM · On Joshua Bell’s At Home With Friends CD he plays the second movement from the Grieg Sonata No. 3, opus 45 in C minor. At the piano is Sergei Rachmaninoff, whose playing is extracted from a 1928 recording with Fritz Kreisler. To study this musical template is to marvel at the spaciousness laid out and the time taken between notes. What’s different about this approach from a live performance is that we know the structure belongs to Rachmaninoff. It’s as if the music is laid out in a system comprised of the architecture, language, and common sense of the master himself. Who wouldn’t want to immerse himself in Rachmaninoff’s vision and rhythm?

Trying to fit in with Sergei is one thing, but doing it is another. My template would be less expansive than his, to say the least. Always ready to move on from one phrase to the next, I would no doubt crimp his style. My system could learn a lot from his. 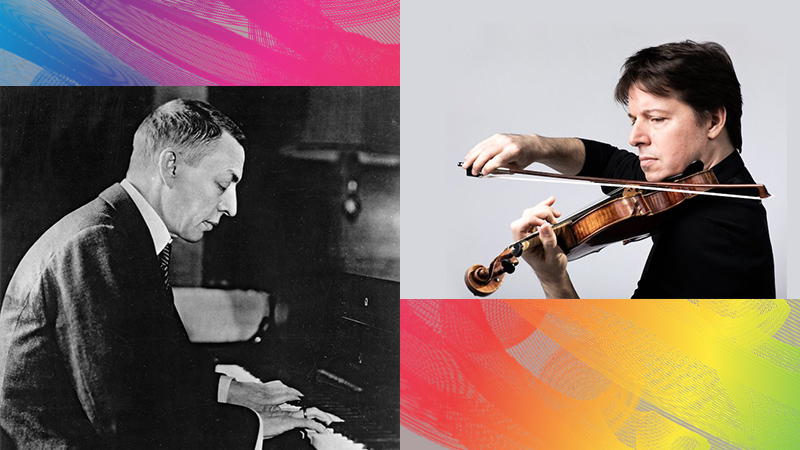 Each of us has our own system, and we are our system. It makes us predictable, in a good way, and lets us know in advance what will work and what doesn’t. It keeps us from getting overrun by ideas that we feel compelled to follow, like from a teacher or someone we look up to. Not that our systems are flawless, but they show us what we are prone to do, both the good and the bad.

Your power and potential lie in knowing, accepting, and even loving what your system is. Its consistency implies that most of the time all is good, which in turn helps you to focus on the flaws one at a time.

There’s a trick to fixing the mistake that keeps reappearing, like a fly that won’t leave you alone. As difficult as it is to remove the fly, it takes a lot of concentration even to remember what the mistake was. Forgetting a mistake shares the same realm as forgetting what you came in for when you walk into another room. Here’s how you ‘capture” the mistake when you keep playing the wrong note or rhythm: While you replay the passage, only think of the mistake and literally nothing else. Observe your process as you approach the mistake, then consciously play it correctly. It may be cumbersome at first, but forming a new, correct muscle memory takes a lot of concentration. Birthing bad muscle memories is regrettably very easy to do. I was quite prolific at it.

Knowing your system means you can trust it to work well, which in turn affords you the opportunity to remember the mistakes will annoyingly reoccur (in exactly the same manner), unless you steadfastly eliminate them.

I was born with a rhythmic system that rushed when I switched to 16th notes. It’s very common to have this flaw, and it wreaks havoc. (It has one advantage, however, which I’ll mention in a moment.) Because we start as beginners playing music without others, there is no context that we can compare our rhythm to. Unlike singers, we don’t even have consonants and vowels to define the rhythm. So 16th notes can slightly misbehave, finishing too soon or too late. As I listen to Rachmaninoff’s playing, I can tell when I would rush. Of course, the great thing about playing with a virtual pianist is that, not only will he not budge, but he’ll help stem the tide of my rushing.

If you’re cursed with playing the 16th notes too quickly and suddenly, or what I call “front-loading” the fast notes, there is the advantage of playing them with more accuracy. It’s one of the quirks of classical music that notes are easier when they’re faster, or at least it seems that way. Thinking of spreading the notes out evenly, like the span of a rainbow, takes more effort and experience. There’s more opportunities for mistakes to happen. The more you expect, the more pitfalls you may encounter.

Are Your Beats Bursting at the Seams?

If you’re a front-loader, your rhythm may also fall into the category of the opposite problem, needing a skosh more room. Of course, if you’re playing by yourself, you can take all the time you need. Four 16th can take up the space of five, it’ll feel good, and no one will be the wiser. However, when you’re playing in an ensemble, that fifth 16th will either make you uncomfortable, or throw everyone else a little off.

What’s important to remember is that beats come at us like tennis balls; they arrive sooner than we think. It’s easy to be confused by this, because while beats stay generally the same, they play tricks with our brains. I like to think of beats having a predictable and quantifiable length.

If beats become too malleable and tend to disappear in your mind, I recommend thinking of a brick. I know it sounds pretty harsh, but the brick’s non-negotiable length makes its presence felt even during the vicissitudes of rubato. The obvious concern would be that a brick is too inflexible and wouldn’t allow for slight tempo changes. However, it easily adapts to slight fluctuations, in the exact manner that fingers adapt as they shift from first to seventh position. “Musical adaptation” takes place, in which hard measurements morph into whatever’s needed at the moment. Maybe it could be explained by science, but the musical mind does it better.

The Fancy Word for Formula or Pattern

I’ll admit I’ve used the word algorithm in a sentence and had no idea what it meant. When I thought of great violinists making slight variations in their sounds, they seemed to do so without throwing everything else off. Algorithm would pop into my brain because people other than computer scientists started using it in interviews and Ted Talks to denote formulas and predictable results.

So now that I have a lot of time on my hand, I looked up the definition. Unfortunately, I looked up logarithm by mistake. It took 30 minutes to remember algorithm. I can advise you there’s no need to look up logarithm. Here's what an algorithm is: "a process or set of rules to be followed in calculations or other problem-solving operations."

Our mistakes boil down to one essential thing: they reappear in the same form many times. Since we don’t change from moment to moment, we approach music in essentially the same way every time. Thus, by concentrating and discovering the cause of the problem, we fix a tiny mistake (in music, that’s an oxymoron) or radically change the character or span of a phrase. Algorithms are not inconsequential. They transform.

Since practicing is by and large fixing mistakes, it’s important to keep other mistakes at bay. Having confidence in your playing, even if you have to fake it, helps you see your playing as a “system.” You’ll discover that you play with more ability than you imagined, that you get most of the notes, and even your bowings are by and large correct. Take a look at what you do, pat yourself on the back, and enter the world of fixing one mistake at a time.

April 11, 2020 at 01:01 PM · The concepts you put forward came together perfectly when I listened to Sergei/Joshua. "Rhythmic rainbow" without a doubt! So many wonderful suggestions in this article to contemplate, starting with how wonderful it would be to actually know, accept, and love one's own system. Definitely something to work on! Thank you for such a thought-provoking post.

April 11, 2020 at 04:31 PM · I think knowing, accepting, and loving your own playing is very difficult. The first is not easy, the second more difficult, and the third the hardest to achieve. My guess is that Perlman and Ma feel a lot of love.

playing for 30 years and started up again a few months ago.

I am playing a mix of works learned in college and new.

When I play along with recorded piano accompaniment,

the tempi for most music, i.e. Vivaldi, Mozart, seem much faster.

Is this me, a musical evolution or a combination?

April 12, 2020 at 08:28 PM · I think playing with a pre-recorded piano part, like music minus one, puts the player at a disadvantage. There’s no flexibility from the pianist, just af if you were playing with a metronome. I don’t think tempos have gotten faster in 30 years, but it’s always difficult to play with non-bending accompaniment. You may want to try asking a pianist to play with you, who will listen to you and follow. Good luck!

April 13, 2020 at 02:04 PM · @108, Sorry, I forgot to mention that you’re right about tempos being faster these days. I think there are recordings of the piano part only that give you a choice of tempi. I’m not sure which company offers them.

April 13, 2020 at 11:39 PM · Glad to know it’s not my imagination! Maybe there’s a way to alter the speed on youtube playback. I find that playing with accompaniment has helped to re-tune my ear. Thanks.

April 15, 2020 at 04:01 PM · Miscl. thoughts about tempo and timing. I haven't had that problem of rushing on fast runs. Besides being naturally slow, which is a different problem, I prefer to be aware of where to place the last note, the target note, which is usually on a main beat. Then it is more impressive to start a little slow, then accelerate and crescendo into the target note. If it is on the other side of bar-line, some people stumble there, unconsciously turning a bar-line into a rest. For tempos; "I don't need a metronome to tell me how fast I want to play it" (anon.) For a lot of pieces there is usually a spot, or melody, that only sounds right within a narrow range of tempos. That's the tempo for the piece. With students, playing duets to fix rhythm is a lot more fun than using a metronome. For orchestra parts and auditions, ideally, be able to play the hard stuff one notch faster than what the conductor might want.

April 16, 2020 at 04:59 PM · @168, I find your awareness of rhythmic guidelines pitfalls very helpful. The most sophisticated rhythms are heard by the likes of Dietrich Fischer-Dieskau and Ian Bostridge singing art songs. They show how much imagination and freedom enters into rhythm. The other side of the coin, but equally valuable, are the guidelines that orchestral musicians must follow. Fitting into the conductor’s structure requires both artistic and engineering expertise.

Yes, some singers can have a wonderful sense of timing, because they can go with the rhythm of the text instead of the mathematically evenly divided pace of an instrumentalist. If you do an exact rhythmical transcription of a pop or folk singer (I'm thinking of Sinatra, Nat King Cole, or Bartok's transcriptions ) it looks like an unplayable mess. On the other hand, there is the bad joke; "How do you know that there is a singer at your front door? -- They don't know when to come in." We could be more free with our solos. Then there is the fine art of deliberately not playing together, which gets you fired from modern western orchestras. For example, in the classical music of Morocco, they will do a messy unison when each instrument plays slightly different according to the technique of their instruments. The ethnomusicologist will legitimize it by labeling it - "Heterophony".

A quote from Life of Rossini, by Stendhal, on the first performance of a Mozart opera in Italy; "..the poor players could make nothing of it. You see, it meant that each one of them had to play strictly in time...had to enter and finish exactly where Mozart said they should. The lazier players, in disgust, referred to this unfamiliar principle as - Barbaric." [--joel q]