Violinists, Conductors, and the Art of a Good Cue 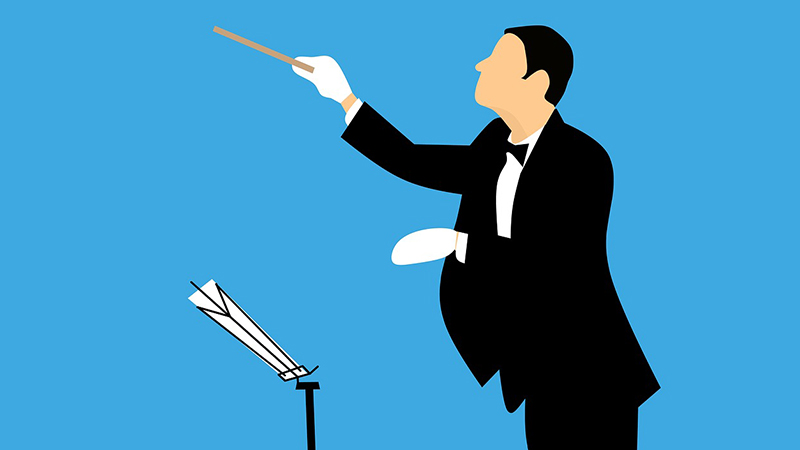 You lift your violin and bow simultaneously, then come in on the downbeat, right? However, the person you’re cuing comes in late. Whose fault is it? The fear of the first violinist leading the string quartet can only be eliminated by tackling this age-old problem. As beautiful as it is to watch a fine chamber music group signaling each other, nothing that looks that easy is.

Let’s list a couple of things that can go wrong:

Learn From the Best: A Spanish Conductor Paints a Picture

Rafael Frübeck de Burgos (1933-2014), the esteemed Spanish conductor from a family of German ancestry, was a much beloved guest conductor of the Los Angeles Philharmonic for about seven years. He had a unique way of giving cues in that he indicated the upbeat clearly AND exaggerated exactly where the downbeat was. He illustrated perfectly the importance of a fully formed cue. If you leave out the final preparation before the downbeat, something that feels like the graceful lull before the next beat begins, you essentially cut out part of the heartbeat. The healthy preparation that you’re supposed to feel before the next beat reminds me of what you feel right before your feet hit the trampoline. Does this justify buying a trampoline for your violin students?

When he conducted the LA Phil, it felt like they were being spoon fed the beats, not necessarily a bad thing. After all, the most invisible part of conductors’ beats is the moment of the actual downbeat, also known as the "ictus." (The unstressed part of the beat, that which shows breadth and character, is the "anacrusis." I wish they had come up with easier-to-remember words. Sometimes anacrusis is defined as the pickup to the downbeat, but I think of it as the sostenuto part of the conductor’s beat.) What I’m really talking about doesn’t have words to describe it. What we have to master are two things: 1. the pinpoint downbeat, which is rendered in a very subtle, almost invisible way, and 2. everything but the downbeat. Let’s just call it the downbeat and "everything but."

The Musician’s Role in Receiving the Beat

The musicians have the job of defining the beat by giving it the right timbre and articulation, while the conductor artfully and subtly weaves around the beat. To the audience, some conductors seem to make the ictus disappear. (Pierre Boulez is a great example.) This interplay of well-articulated sound and artsy baton movements shows the trust and communication that take place between conductor and musicians.

Here are two examples from a performance by Frübeck de Burgos. In the first, the winds are clearly showing to each other the dip, lull, or whatever you want to call it before they actually play. I like the term "cul-de-sac," which literally means "bottom of a sack" from the Latin culus, "bottom." You can also see this tiny attachment at the bottom of a thermometer.

The second example is the conductor’s final downbeat. I looked throughout the video for a really obvious example of his perfect prep for the downbeat followed by handing the downbeat to the musicians on a silver platter. I couldn’t find anything but subtle demonstrations of this skill. (He maneuvers elegantly and quickly through the pickup to indicate the nice plateau before the actual downbeat.) Lo and behold, I was rewarded with a perfect example of what I’m talking about on the very last note. He gives a wave of his baton downwards, stops a moment before the downbeat, and flips his baton up a musical moment later. The exaggerated way he did that is a skill you don’t see very often. (See 24:16 – 24:31 above)

Why can’t all conductors do that? It would make our jobs as performers so much easier!

There’s Always Time: Recognizing the Parts of a Measure

For a young student who’s learning how to cue her pianist, nothing is harder than the beginning of the first movement of the J. S. Bach Violin Concerto in A minor.

First it’s fast, with a quick eighth-note pickup; then it’s slow, with a quarter-note tenuto downbeat. And here’s the wrench thrown into a difficult cue: she needs to bring in the pianist with her on the upbeat. The tendency is to rush everything and feel like it all runs together. Of course, a good accompanist will anticipate where to come in from the body language of the violinist, even if the sequences of the movements are rushed and haphazard.

The reason for the beats falling over themselves is that fast short notes and slow long notes play tricks with our brains. In the Bach example, the student often doesn’t hold the quarter note long enough. She comes in early with the upbeat, and generally just feels anxious. What should be a valuable skill that is fun to learn becomes something to dread. Cuing is at the heart of understanding music’s spaciousness.

The discovery by the young student of how much time there is to enjoy every part of the measure can be a joyous one. It involves singing the measure in a slow but proportional manner. There is an element of turning off the anxiety factor by waiting patiently to observe each part of the process. If she takes a moment to shed the huge accelerando she’s injecting into the pickup, she will feel something wonderful has opened up, like the waters of the Dead Sea parting.

In the Bach the soloist needs to lift her violin a moment before the pickup note. I agree it’s a lot to think about, but when she learns each that note, breath, and even rest has its place, she’ll no longer rush. There’s always time, and even a corresponding emotion. Don’t skip the small stuff. Enjoy the proportion that the composer sweated over so that you can play great works of art.

March 24, 2020 at 11:03 PM · It's all in the anticipation, the preparation, the up-beat. Cues need to be made one beat ahead of the entrance. I don't watch the tip of the baton because most of the time my eyes are on the music. Instead I see the whole of the conductor's body language by peripheral vision. This is best illustrated by a conductor who gets it wrong, I won't say who. His cues happen right on the entrance, which is too late. His baton motion is the opposite of proper. His down-beats float down, like dragging the baton through oil, waiting for all the musicians to catch up, then at an unpredictable moment his baton flashes up, as if someone pulled it out of his hand. I tell new people to go with his up-motions, not try to find the down-beat. For my limited experience as a conductor, I try to think of my right arm motions as an extension of my bowing as a concertmaster, if that makes any sense.

March 25, 2020 at 04:49 PM · I remember one conductor who told me he learned from a student of Toscanini (supposedly)how to make the violins play exactly with him on the downbeat. The “secret” was to show the downbeat in the exact same place in the air for every single beat. So much for theories. Of course the conductor was late all the time. The orchestra had to simply not watch him.

March 25, 2020 at 06:08 PM · The Bach is a great example. While it's relatively easy to play, it's very difficult to get the initial entrance (as you described beautifully). What did you say to this young student to get her to the point where she was enjoying every part of the measure? Also, most students don't get to work with an accompanist until fairly close to the end of the process. So the problem may already be inbred. I'd appreciate your advice.

March 25, 2020 at 08:16 PM · @66, Talking to a 13 year old about what there is to enjoy In the Bach opening is an interesting proposition. I would say there were 2 trumpet-like fanfares, followed by the energy unwinding. This would show a sense of music being spacious, never compressed. She had trouble signaling a sharp, well-defined upbeat because she was paralyzed with the difficulty of the opening. I suggested she give a hiccup, not a pickup. That helped her free herself and move with a little impulsiveness.