Cues and Miscues - The Misbegotten Beat

February 4, 2020, 9:23 PM · If you can’t find the beat in Stars and Stripes Forever, you may want to consider a different profession. If you can’t find it in a Mahler symphony or Sweeney Todd, keep looking for it. The reward will be well worth the journey. Ties over the bar lines, dotted rhythms, and sudden (or gradual) changes of mood all serve to confuse the performer but delight the listener.

The beat is always there, but it’s disconcerting if you can’t find it. I like to have a Plan A, B, and C in the wings, since I came to start thinking of rhythm as a life or death situation. I think there are some of us who hear all the parts so well that they simply enter when it’s their turn, like an actor weaving in during a dialogue.

I remember one principal flutist who, in a contemporary piece of gnarly, weak melodies and obtuse rhythms, explained that her listening precluded the need to count. That she could wade through such a briar patch involved a level of talent up there with perfect pitch and artistic sound production. The ease of the super-talented awes me, but music offers something magical for everyone. In the end, we all share the same goal: to make the nature of music speak through the jargon of our technique.

The Shape Is Hidden in Plain View

Think of a conductor who waves his arms with a subtle, atmospheric choreography. Think of the same conductor who is still perfectly on the beat and conveys the perfect thrust of anticipation. Karajan, Boulez, Giulini, and Thielemann come to mind. Everything is clear except for one element, that being the actual beat, the thrust, or, if you want to be definitively au courant, the "ictus." (This unattractive word seems harsh and out of place in the musical vocabulary. However, it fits nicely in cerebral medicine, in which it means stroke or seizure.) Like the crest of a wave, the beat’s center is the reference point that can be ignored only at one’s peril.

I found something that literally illustrated the “point”. The vagueness of downbeats, whether they’re hard like an accent or soft like a sostenuto, is actually quite specific. Uncertainty has no place in music. We quantify elements of time in the language of musicians, not that of scientists or mathematicians. While the conductor’s job is to clarify the overall musical conception and the big picture, it is a musician’s job to interpret it down to its smallest compartments.

An optical illusion that I found in a book shows the structure that sometimes feels missing when you’re trying to determine where the apex of the beat is. (I can’t bring myself to say ictus again.) 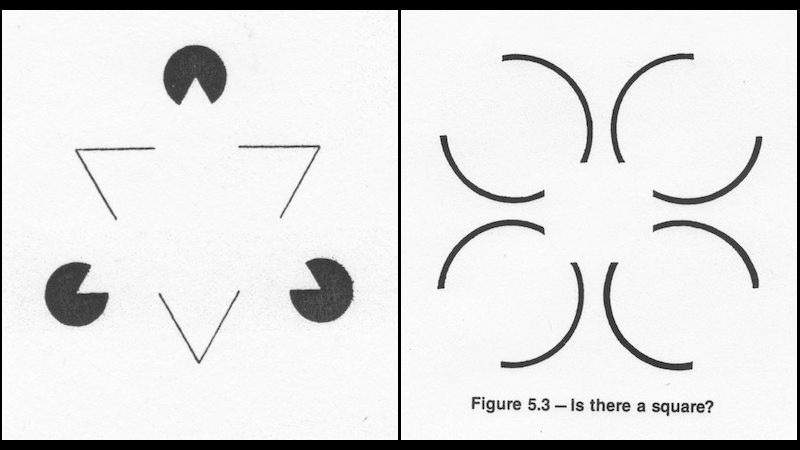 There is a lot going on during the apex. For example, the hand is changing direction in an expressive or quiet manner, which doesn’t make defining the point of the beat a priority.

Part of a conductor’s responsibility is to not spoon feed the apex. Simon Rattle demonstrated this with the Los Angeles Philharmonic in the pizzicato on the last note of a Bruckner symphony. Should he have speeded up the beat to narrow the target zone and make it easier to play, or finish with a round, very long pick up to achieve a warm, mellow pizzicato? He picked the latter and scared me to death.

In contrast to Rattle’s style, Raphael Frubeck de Burgos insisted that we wait for the apex, and he would always give it to us on a silver platter. I’ll have to admit it’s a lot easier to play with such a helpful hand. It’s something you see often in high school, but you’re never too old to appreciate it.

My Hero in Finding Obscure Beats

Working with children with various degrees of rhythmic skills, the piano accompanist is the most gifted among us in terms of sounding cohesive and convincing. Where one measure may have two or three beats in incorrect locations, accompanists have the uncanny ability to play in a solid fashion with the right dynamics and inflections. This is not easy at all, and I believe their success lies in estimating where the beat should be and trying to stick with it. Of course, that helps guide the child back to where the beat should be. Certainly the child may be off only very little, but in music that’s still quite disconcerting. These heroes deserve our respect, as wrong cues go in one ear, and correct ones come out the other.

February 5, 2020 at 06:03 PM · It is amazing to me how some artists can make you want to dance by virtue of their familiarity with the true beat. Others, playing the same song with you in your chair

February 5, 2020 at 11:57 PM · Your point about music making you want to dance is very true. No two people play the same measure the same way. A little crescendo and a little forward movement may be all it takes to give a phrase a lilt, and even make it take flight.

"We quantify elements of time in the language of musicians, not that of scientists or mathematicians."

Perhaps, but since I'm a science nerd who got into music, I've managed a fusion of the two. I've always been fascinated by the binary system, and it serves me as well in music as it does in computers. In addition to the usual binary subdivision of notes (half, quarter, eighth, sixteenth...), you can go the other way. Two measures make a phrase, four make a line, eight, sixteen... you can feel longer rhythms as well. I know, there are exceptions such as shortened or elongated lines, triple meter, etc. - but the binary system is a good starting point.

Once you've developed a feel for these longer rhythms, little variations and quirks are minor disturbances in a single measure. The overall rhythm of the piece remains intact. And yes, I'm one of those people who often doesn't have to count out a long rest; if I'm to come in at the start of the next musical section (e.g. 16 bars) then I can feel when it's time.

I find it frustrating that so many people don't have this feel. (Our conductor finds it frustrating too!) I'm thinking it might be time to try to put together some sort of course on the fundamentals of rhythm. Perhaps I could help these people who seem to have so much trouble with something that I find so obvious. I don't think of myself as a teacher (some people have disagreed), but are there any suggestions as to how I could do this?

February 6, 2020 at 11:20 PM · Charlie, I should clarify my statement about musical language by saying that I have seen some extreme examples of graphs and charts that described musical phenomenons. What I depend on is my ear to tell me what’s wrong and then figure out why and how I went down the wrong path. That’s why I avoid mathematical and scientific explanations.

However, the physics of movement and knowing how things can go awry (my loose definition of entropy) fascinates me. My musical development depends on improving my ear and how I respond to it. I think about physics in musical terms, not music in terms of physics.

Charlie, thank you for bringing up a really important subject. Sharing your observations is the best teaching tool.

February 8, 2020 at 05:09 AM · Paul, that's an interesting way of looking at physics - the opposite of looking at music in terms of physics. Either way, it's wonderful if you can pull it off - you get both the left and right halves of your brain working on it.

February 8, 2020 at 12:26 PM · I liked your paragraph that started with “Once you’ve developed a feel for these longer rhythms...”. It illustrates the complexity of rhythm, that it’s more than just following a metronome. A good way to teach how to keep the rhythm intact even when there are subdivisions, dotted notes, 32nd notes, etc., is to ask the student to distort his playing even when it’s going well. He then gets a feel for the control he has, and for the control he may lose.

February 8, 2020 at 03:17 PM · Really great article! I appreciated that you compared good rhythm to perfect pitch and great sound. It's easy to undervalue rhythm and to assume that everyone has a strong sense of it. Rhythm often gets short shrift within the extremely long list of other things a violinist needs to learn. (And while I don't have any great suggestions for Charlie, I think his idea of a "fundamentals of rhythm" class is a wonderful idea.)

February 9, 2020 at 04:25 PM · @87, Thank you, and I think there’s never enough that can be said about the fundamentals of rhythm. Every measure brings with it one or more surprises. V.com is such a valuable forum to discuss them.