Vibrating With Zero Tension in the Wrist and Elbow

December 7, 2020, 12:18 AM · A few weeks ago, a tiny thought came up while I was vibrating with the fourth finger. It was simply that, rather than be focused on the finger itself, all I needed to do was shake any part of my arm or hand, which would in turn shake my fourth finger. I re-routed my thinking away from the weakest link and started with a stronger, more reliable, and more sensible part of the arm. 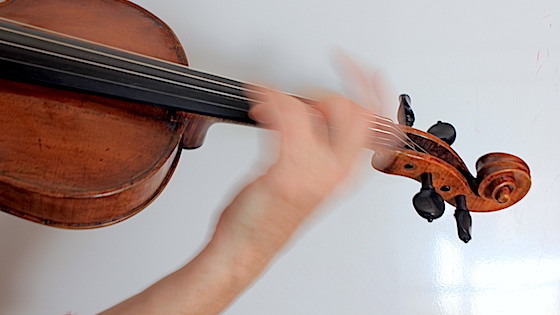 As long as all the parts of the arm were connected, I could shake my middle knuckle, for instance, and the energy would transfer to my pinkie, all the way to the fingertip. The alternative, in which the mechanism of the fourth finger acts on its own, is more likely to cause tension.

This made me think about the best way to instill that in a young player. A natural movement such as this, that is based on principles of unity and simplicity, can rarely be reduced to a brief teaching moment. Some students with a natural ability to both hear and see a technique can pick up the true essence of vibrato after a few exercises, while others may need more time.

To deal with tension in the wrist and elbow, and to nurture a freely moving arm, minimize the impact felt on those joints.

Re-configure your perception of the left arm. If attention is taken away from the wrist and the elbow, they will move on their own with little prompting from you. They are designed to passively react to the movement of the arm, not vice-versa. Leading from the joints themselves is contrary to their nature. With such a large and strong structure as the arm available to initiate the movement, the wrist and elbow need only to respond in a relaxed manner. They oscillate back and forth and embody a pendulum, motions which are easier to imitate visually than to describe in words.

The most magical thing about vibrato, other than the beauty and depth that it adds to the violin’s sound, is the fail-safe aspect of it. By making one pendulum-like motion with the most solid part of the arm, the elbow and the wrist will naturally swing back and forth. They work naturally in all other parts of our daily activities, but somehow their basic, swing-like motion is harder to come by while vibrating.

It can be accomplished by using your visual and observational skills, copying what you see. Unfortunately, there may be side effects that have accumulated during the process of practicing the vibrato. So, if tension, friction, and other complications are affecting the joints, you can use imagery to envision what the final result should feel like. The three analogies to vibrato that I’ve come to rely on are rather odd and humorous, but nonetheless effective.

(Since a gadget is worth a thousand words, this video shows Tube Man in a size that anyone can own and put on his desk.)

December 8, 2020 at 08:32 AM · Great article and very true. 4th finger vibrato is something I am myself fascinated by, perhaps obsessed. it is different from the other fingers in that...there is no next finger! so you are "at the end" so to speak. hence the vibrato mechanism changes to more a "cello-like" mechanism, what Paul calls "moving something else than the finger itself". the thumb remains the pivot. of course such a cello vibrato must be modified to keep a correct violin hand frame.. something Simon Fischer points attention to is tension in the base of the first finger. release that base of the first finger, which typically provides groundedness for your hand frame. but when playing a long note or vibrating 4th finger, you loosen that base temporarily so that the flexibility in your 4th finger tip (very important!!) can be leveraged maximally.

December 8, 2020 at 03:11 PM · Thank you, Jean, for the helpful cello analogy. The 4th finger carries an extra burden in that it usually touches below the fingertip, rather than on the fingertip like the other fingers. Violinist need to still apply enough attention to that difference to make sure that the energy gets to that special area. The engineering is different, so it’s easy to overlook.

December 12, 2020 at 03:18 PM · You write "I re-routed my thinking away from the weakest link and started with a stronger, more reliable, and more sensible part of the arm." Such a simple change, but one that had never occurred to me before. My pinkie and I both thank you!

December 12, 2020 at 06:27 PM · Diana, please tell your pinkie “you’re welcome”. My relationship with my pinkie is undergoing much needed repair. I may even give it another name, because pinkie doesn’t inspire a lot of respect. What about “the other index finger”?