Orchestra Playing: Flying as One with the Flock 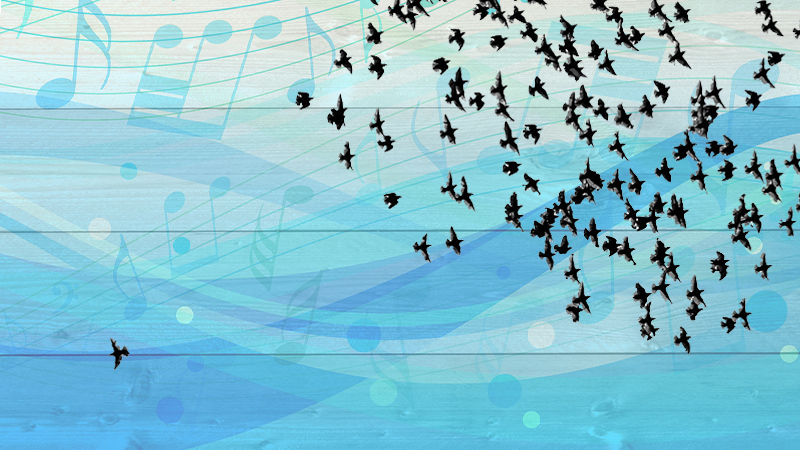 An interesting phenomenon happened to my technique when I first started playing in an orchestra. The cohesion and cushion from my section, supplemented by the conductor and all the musical elements that were bound together, made my playing flow more easily. It was as if a large hole in my technique had been filled. Of course, it was partially an illusion; without the orchestra, my technical issues became evident again. But something had changed after playing in an orchestra. I realized that flow, anticipation, and group rhythm can help with hesitant and faulty technique.

Riding the musical phrasing of the orchestra also had a great impact on my playing. Phrasing gives purpose to my technique, which in turn makes playing the violin easier. Now, if I could just harness that quality without the orchestra present.

A recent experience inspired me to think about that phenomenon, and about what makes a good ensemble. Watching the synchronized flight of a flock of starlings every morning this week in Los Angeles showed me the importance of retaining one’s individuality while being part of a group. The configurations appear glorious in the air - even though each bird is doing its own thing. The wings may be slightly out of sync, but the flight pattern appears intact.

That larger picture is what unifies the musician and the bird.

How to Listen to the Musical Template

In order to harness the power of the orchestra, it's important to define what you hear. Whether it’s the shape of a phrase or the dynamic changes, it will be the template into which you fit your playing. In this context, that template limits and defines your own interpretation. Careful listening such as this is precisely what orchestras and chamber music groups look for when they’re auditioning new players. With careful listening, the orchestras’ templates become evident, enabling members to blend in at all times. In fact, ensembles expect their colleagues to be adept in that ability.

If you’re sitting in a section, the whole is greater than the parts. The orchestra will not bend to the individual. But sometimes it’s not easy to hear what the group is doing, with so much energy devoted to getting one's own notes and bowings right.

There’s a little trick to getting out of this trap. Just as peripheral vision helps you look in places that you don’t ordinarily look, listening and tuning in to the overall sound will alert you to hidden surprises and help you make the adjustment in your own playing. The difficult part is getting your head out of whatever mental groove you’ve created and noticing little details. The signs are all around you, but it’s all too easy to ignore them.

1. Musical Momentum: Small changes commonly occur in musical momentum – tempo is never 100 percent fixed. Instead of measuring each bar line, notice the larger ebb and flow from moment to moment. Music is very predictable, but it changes on a dime.

2. When in double, follow the section: Conductors aren’t perfect; sometimes the section is together with the rest of the orchestra, but the conductor is off. In these instances, stick with the section.

3. Fit in: "Fit in, don’t stick out, and don’t try to be the leader!" as my father said. The section’s timbre was created out of the magic alchemy of someone beating time and musicians coordinating their disparate musical personalities. It’s worked for hundreds of years. Bach said it a little differently: "How hard can music be? You just play the right notes at the right time."

Fitting in is enough of a challenge. Why add personal idiosyncrasies? When the music is being expressed, it takes a good ear and observation to simply follow its contours. It’s best to not fixate on your method, which can easily become a distraction from the music at hand.

I remember an experience which illustrates the pure connection that happens between the conductor and the players without the need of much verbal explanation. Many years ago, I subbed with an orchestra in Texas. There was a principal string player who micro-managed his section. He brow-beat them to vibrate on this note but not that note, and to hold their instruments higher. Most annoyingly, he would nag individuals to second guess their way of playing. Strangely enough, he got away with it. When the section had a prominent line, not surprisingly it didn’t quite fit in with the rest of the orchestra.

The music director and numerous guest conductors watched this middleman interrupt the musicians while they were trying to follow them. The conductors didn’t even try to stop him but were probably annoyed. It took one guest conductor who finally said just the right thing to the principal: “Why do you keep turning around so much? How much is there to say to them?”

It was one of those defining moments that everyone will remember, in which musicians felt trusted again.

November 30, 2020 at 10:02 PM · Blend with the section; definitely. An odd thing that the section violinist needs to be aware of is; In a loud tutti, if you are playing in tune with the chord of the orchestra, your sound will seem to disappear, your perceived volume is reduced when absorbed by the whole, and you can't even hear yourself. The mistake some players will make, especially with high notes on the E string, to check if they are playing the right notes, is unconsciously push the pitch sharp until they can hear themselves. Or their vibrato will push the pitch sharp. This annoys the woodwinds. That also might be why some soloists will play just a little bit sharp.

December 1, 2020 at 12:51 AM · Thank you, Joel, for mentioning some habits that sometimes interrupt the identity and fluidity of an orchestra. When there is a sense of not being able to hear yourself, it can be remedied by learning to know your own playing with minimal hearing. Knowing what results your physical movements produce helps you to hear with your body and not just your ears.

It reminds me of the famous story about Glenn Gould. He was practicing Bach (what else?) while someone was vacuuming. He couldn’t hear himself, but realized he had never played it better. He then realized how his inner ear was more valuable than his outer.

December 1, 2020 at 03:44 PM · This was a wonderful post! The phenomenon you describe occurs in choral singing as well. In fact, good choral conductors generally pick a "voice" within the section that exemplifies the desired sound and the other singers work to blend and match that timbre. I'm often surprised when I hear a choral singer on an individual basis and the sound of his/her voice is not to my liking, and yet the same voice can be a perfect addition to a section when the singer understands how to make his/her sound blend within the ensemble.

December 1, 2020 at 05:57 PM · Thanks, Diana, for your interesting take on what goes on inside a choir. I think quirk rhythm can make someone stand out more than sound. When I’ve heard certain sounds, though, that cannot blend, I hear overwhelming force coming out of the player. I don’t think, in those cases, that the player even wants to blend.

December 1, 2020 at 09:11 PM · Some choir directors put their better singers in the back row, not up front. Sometimes I wonder if string sections should do that. Rotating seating is something like that.