The Roller-Coaster Physics of 'Going with the Bow'

November 17, 2020, 11:22 AM · Physics happens! There’s no getting around it – bows behave badly at the frog and the tip, without attention to gravity and bow weight. Changing direction and crossing strings can complicate the smooth ride. It may be as simple as the need for more weight at the upper half and less weight at the frog. However, fine tuning such a transition requires a sensitivity to when the balance of weight changes.

Do you read the signals that your bow is too heavy, or that the hair is barely touching the string? Do you adjust accordingly?

Some violinists sense those changes and adjust to them instinctively, while others don’t observe them unless they’re pointed out. Scratchy and bumpy results follow a disregard for physics.

It reminds me of the near catastrophic adventure I had with a rollercoaster, the "Desperado" at Buffalo Bill’s in Nevada. Although I met the age and height requirement, I failed at having rudimentary rollercoaster sense. 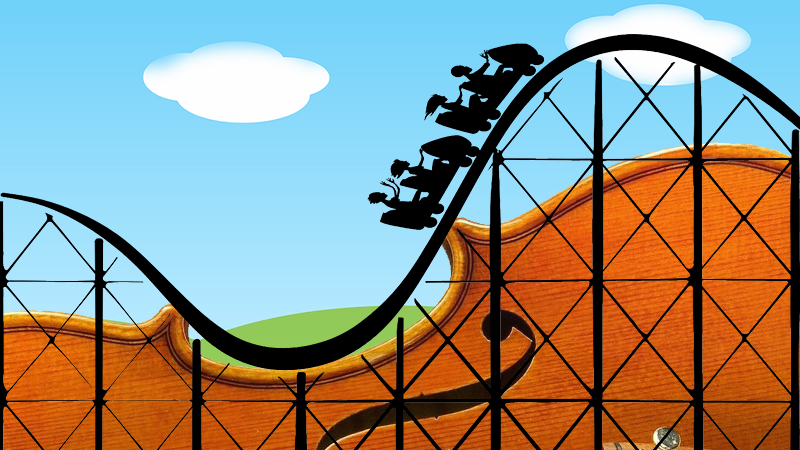 My "physics deficit disorder" ran roughshod through my body, which needed to go with the flow, or at the very least, acknowledge it. Instead, I kept my body rigid -- while the rollercoaster had other plans for it.

I spent the night in the emergency room and learned how lucky I was that I hadn’t damaged my kidneys. I missed two weeks of work in the orchestra, all because I didn't understand the simple maxim of movement: "Go with the flow; when your body slams to the left, don’t try to stay in the middle." Amusement park rides don’t come with such instructions, however. I probably wouldn’t have listened if they had.

There I sat, at the end of the ride - good posture, sitting dead center, and with my hands dutifully and firmly gripping the bar – exactly the opposite of what I should have looked like. 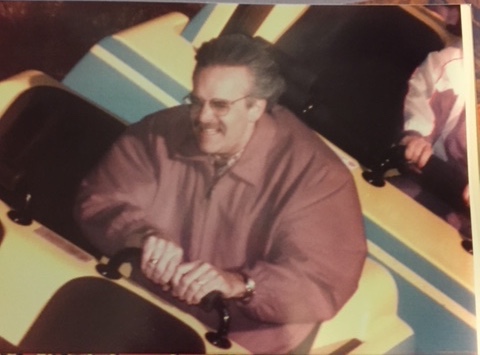 This painful lesson in physics has implications for the bow arm: it must also go with the flow, easing up at the frog, relaxing into the tip, moving fluidly to support string crossings. But how do you know what is around the next bend? Here are a few tips for getting in touch with your inner sense of physics, so that your bow can go with the flow.

Exercise for Learning to "Go with the Bow"

No matter what your bowing style is, whether your elbow is high or low, you’ll have the best results if the movements are free and unimpeded. Try this exercise to highlight and observe the altitude of your bow and arm, while keeping all other conditions the same. Without knowledge of how the bow arm glides in the air currents above the strings, all sorts of sagging may take place.

Here are a few reminders about things that can go wrong with the bow arm in terms of weight and balance. Violinists develop their own personal language that warns them about too much pressure, or not enough bonding between the hair and the string. These are the more prevalent occurrences, and just putting them on a list is a good start.

And just for your amusement: the rollercoaster that landed me in the hospital!

November 18, 2020 at 03:41 PM · Imagery is something that has helped me with violin playing and singing. Your thoughts/images are extremely helpful. (I'm striving for "free and unimpeded.") Thank you for another great post!

November 18, 2020 at 05:39 PM · Thank you, Sofia and Diana. I think the one thing that helps make sense of music’s complexities is imagery and anecdotes. I’ll use whatever I can find that will uproot an old, bad habit. This quote describes how destructive habits grow: “The chains of habit are too light to be felt until they’re too heavy to be broken.”

November 19, 2020 at 05:38 AM · As from ~ Elisabeth Matesky ~ Concert Artist Protege of Jascha Heifetz and Nathan Milstein

After a nights rest, I look forward to reading this article just posted by Paul Stein, Esq ~

There is enormous misunderstanding of The Bow which my longtime Mentor & Friend of 24 Years, Nathan Milstein, was the undisputed Bow Master, sharing his treasured bowing & in Unaccompanied Bach technique's w/me privately at his home in London's Chester Square, UK, for 3 & 1/2 Years & onward. It will be of interest to read Bowing ideas from a differing point of view ~

Greetings from America for now to Paul Stein!

^Your Quote re Bad Habits is Truthful, indeed!

Yes, Physics happens, and gravity is real; at least before Einstein.

Seen written on a stall wall of the men's room at the physical science building at UC San Diego: "Gravity doesn't exist, the earth sucks".

At she risk of repeating myself from other posts;

I have discarded the idea of playing "into the string", and replaced it with "let the string hold the bow".

I have had good results rather recently with this concept; Most of the time, whatever your bow hold, hold the bow lightly. The only times to hold it firmly are when doing ricochet, playing very loud, or the dreaded down-bow staccato (still can't do it). A perhaps inappropriate analogy; Energy = mass X velocity-squared. To pump energy into the instrument it is more efficient to use more bow speed (as long as you can control it!) than more force. The bow acts like a spring, it wants to bounce. Yet many students have an uncontrolled wobble at the middle on sostenuto notes, And, can't do the orchestra style spiccato, their right hand gets in the way.

I think that one of the benefits of a good wooden bow, compared to a cheap bow, is the fine feed-back you get from the stick while playing.

Hold the bow straight up, 12 o'clock position. Turn it back to 1 o'clock, notice that the bow weight is leaning on the first finger. Then move it to 11 o'clock. The bow weight is now supported by the 4th finger. Application; The bow can pivot vertically inside the hand, about the thumb and second finger, when doing quick string changes,on either slurs or separate bows.

2) Starting at the tip, hold the bow only by the thumb and 2nd finger, do slow bow strokes on the open D, upper half only. The only way to control the point of contact, and keep the bow moving straight, is with the position of the right elbow; let the bow pivot Horizontally inside the hand. A light bow hold that allows these pivoting motions will reduce the amount of wrist-bending which is seen with the majority of players using the F.-B. hold.

November 22, 2020 at 12:14 AM · Thanks for the demonstrations, Joel. They are very precise and clear. In our business, everyone has a unique way of describing their bow hold. It can be explained, but sometimes things get lost in the interpretation. I’ll understand it one way, and someone else another way. I think we can all agree that the bow should move like a paintbrush. On top of that, we have to turn a hard hand into a marshmallow. Thanks for your ideas.