October 24, 2020, 10:51 AM · As I was watching a documentary about a sea creature that has always scared me, I instead found myself charmed by the relationship between her and the diver who studied her for a year. Inevitably, I also found parallels between its eight limbs and the four fingers I use to map out the fingerboard. My Octopus Teacher, showing on Netflix, inspired me to invent exercises that made targeting easier. 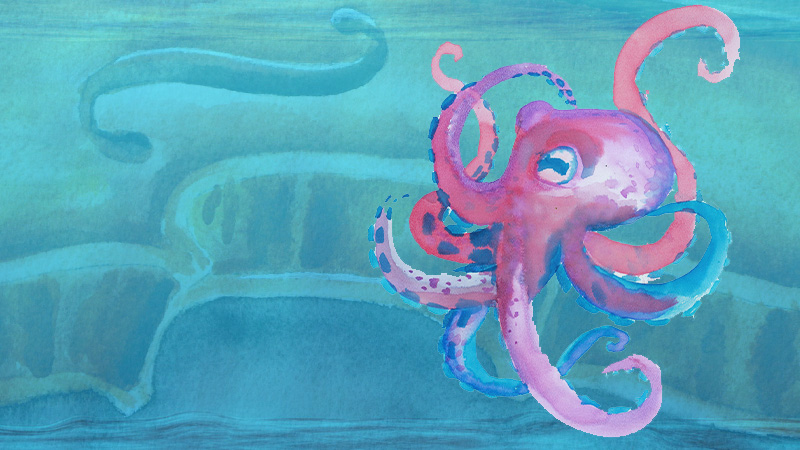 I realized that, while the octopus used her intelligence to pinpoint her prey in a geometric way, I’ve tried to point my left fingers in the right direction. While my targets were at least fixed on the fingerboard, I’ve had to contend with a hand that could be out of balance, and a mind that had to juggle new perspectives and angles from string to string. Variables and obstacles sprung up on a regular basis.

Since the octopus had to contend with swirling seas, survival, and a one-year life expectation, it put my own goals and necessities in a whole new light. Playing out-of-tune isn’t a matter of life and death, but it’s annoying nonetheless.

My hand is always living in two worlds. There’s the staging area, which is above the fingerboard, and the fingers landing on the fingerboard. A lot can go wrong in that quarter inch of air space. Landing on each target requires a moment of firm seating with no hint of ambivalence. Whether one’s fingers are fat or thin, they’re still bigger than necessary for the target area. The staging phase prepares the finger while it’s in the air, and narrowing the target helps the finger find dead center.

Prepare the hand in third position, using the intervals that are easiest on the hand – whole step between first and second fingers, half-step between second and third, and whole step between third and fourth. Make sure all the fingers retain their spacing, whether they’re going to be used are not. Keep your fingers smart and useful. They’re most effective when they’re held firm like skyscrapers. Since the thumb must be lower than the fingers, imagine the fingers on their own elevator.

The second part of the exercise is to alter the makeup of the intervals. Changing the interval between second to third finger from half step to whole step changes the balance and infrastructure of the hand dramatically. Think of it as shapeshifting, something an octopus is very good at. Use this exercise to maneuver the hand in time and space. You’ll be surprised how much time you have between notes, and in that musical moment, the hand gets ready to drop a finger into the slot.

I can’t miss this opportunity to bring up the suckers, or suction cups, of the octopus. The amount of certitude and energy that a violinist needs to make a sure connection on each note reminds me of those cups. When a sucker attaches to a surface, the orifice between the two structures are sealed. The connection we make on the fingerboard may be light and momentary, but there is no doubt about the seal.

Problem #2: Navigating on the Fingerboard in Different Directions

I’ve always found that shifting down to a lower position is particularly vexing. My navigational skills get turned around because shifting backward doesn’t come as easily as shifting forward. I’m better at measuring "up," that is, from first finger upward to fourth finger. Is there a separate skill in measuring backwards? If there is, I never discovered it, and I quit looking for it. I needed to find a better way, one that worked for me.

What I discovered was that, when I shift from third position to first position, I needed to measure upwards from the nut. All those intervals correspond to an internal sense of space. Once I knew where the target pitch was, I shifted downwards like I was jumping in hopscotch.

This system of targeting and intonation divides the fingerboard into very precise areas. Jumping is an interesting skill in a violinist’s toolbox. Shifting is much easier if a direct, spontaneous jump is involved. It works much better than when a violinist hesitantly drags a finger or "bumps along" from note to note.

Jumping from a higher to a lower position, and then back again, shows the diversity of a violinist’s mind. There’s an interesting description about the octopus and how she finds her way around. She uses her navigational skills to return to a den without having to retrace her outward route. It reminds me that every route on the fingerboard is unique and the circumstances are never the same. For a violinist, retracing steps on the fingerboard may seem like a good idea. However, when the hand changes just a little, assessments and adjustments need to be made.

* * *
If you are interested, here is the trailer for the octopus documentary:

October 27, 2020 at 02:52 AM · Brilliant as always! What I like to do when I want to work on shifting is I play A note(I find it more effective and useful) and figure out where it is on all of the strings. Then I pin point from there. Your idea is brilliant and I will definitely keep it to mind!

October 27, 2020 at 04:15 AM · Thanks, Haim. I like your idea because you have control of the exercise, as opposed to an etude. After learning where the A is in different octaves and different strings, you can pick any interval. That way, you can cover every area of the fingerboard.