How to Apply Bow Weight to Create the Best Sound

October 17, 2020, 11:27 AM · Even though violinists have a harder job playing a single note than a pianist, they still have something in common with each other – the delicate use of weight on the key and on the string. It’s a technique which grows in the mind from, when you’re younger, “one motion is loud and the other one is soft”, to developing it into a storehouse of shades and subtleties. 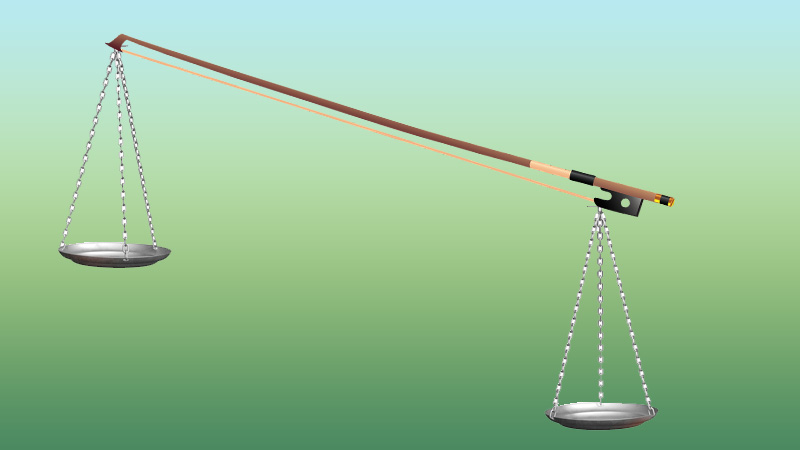 Violinists think of the weight of the bow, the bow arm, and varying the bow’s depth into the string. To keep all the details and memories in a convenient file in your head is one of the challenges facing a musician. Some keep file cards, which wouldn’t be such a bad idea. A checklist, though, would be more convenient.

A checklist should include reminders to keep the bow balanced and straight. There would be a list of dos and don’ts. Surprisingly, the don’ts may outweigh the dos. If I tell myself not to change the weight into the string when I change directions, it’s a healthy and effective way to avoid a bad habit. A glance at your checklist, either in your imagination or written on a piece of paper, will refresh and recharge your mind.

No two checklists are the same. When it comes to bow weight, each person has their particular strengths and weaknesses. Here’s what mine would look like:

1. When I apply weight with my index finger, or whichever finger I use, I shouldn’t weld or glue the finger to the stick. There should be a relaxed connection, so that only a hint of the pressure is all that is necessary to send the right amount of energy through the bow and onward through the string. The image of an umbrella is useful – it doesn’t sit on your head. Respect the symbolic margin between the fingers and the stick. They’re touching, but not sticking.

2. Never let the connection between the hairs and the strings become undone. Even if the fingers aren’t doing their job, or the bow’s gravity isn’t lowering the bow enough, there still needs to be that connection. Luckily, the hairs and the strings can still function independently, even if malfunctions are happening elsewhere. Hair bends and gravity happens, even if my fingers are slightly stiff. I like to think of the connection as one that is as well designed as a zipper.

4. Know what sound I want to hear, then make sure I’m recreating it after I change bow or shift positions. Play more into the string if I’m trying to achieve a rich, lustrous sound.

5. Trust my method of getting into the string. It’s unique and its success depends on knowing its timing, feel, and elegance. Even knowing its faults is vital. They’re often deeply rooted and not easily removed. A fault doesn’t need to be fixed. Rather, it needs to be avoided.

6. When leading an ensemble or giving a cue, extra care should be given to getting the bow ready. With the bow and the violin moving in the air, they should move in tandem so that they work as a team. Sometimes it helps the bow to connect if the violin is stationary.

7. Concentrate on where the bow is at any given moment. The bow is so long that it’s easy to focus on the wrong part, which may be one or two inches away from where I should be focusing. When all the parts are working, I feel like there’s a triangle of concentration between my mind, my bow hold, and the playing points which are changing quickly and predictably.

8. Make the bow higher above the string than I normally would. To make the string spin and the bow glide, I can’t have a sagging arm or bow hair mired in the strings. Think of the support of the bow coming from above, with an elbow acting like the tail of a kite, adding balance, but light as air.

October 22, 2020 at 08:24 PM · Excellent thoughts, Paul. However, occasionally I'll catch myself concentrating too much on things like weight and sinking into the string - at which point my bow will grind (literally!) to a stop. This is when I have to remind myself to keep the bow gliding across the string while applying what weight I need. In other words, think horizontally as well as vertically.

October 22, 2020 at 11:07 PM · Charlie, you bring up a good point about prioritizing what you think about while playing. The technique of the bow can be rightly reduced to horizontal and vertical. Every moment of drawing the bow requires assessing the situation. Thanks for bringing up the horizontal element.

October 23, 2020 at 08:50 AM · Have a look at some of Mimi Zweigs masterclass videos where she is discussing the difference between pressing the bow downwards into the string and pulling or pushing the string. Just thinking about the bow action this way can make the bow hand do the right think without the player being able to actually describe what he/she is doing differently.