August 20, 2019, 5:54 PM · After watching Ray Chen play the Four Seasons with the Los Angeles Philharmonic at the Hollywood Bowl, I had witnessed a perfect display of impulsive bowing and dynamic acrobatics. Not afraid to exploit Vivaldi to the nth degree, Ray changed on a dime. He made it look easy because he knows how quickly music changes direction and emotion. The Philharmonic knows all the tricks of the trade, and the conductor had the skill to show the music’s shapes and boundaries with his hands and gestures. The icing on the cake was the smile on Ray’s face and the sheer sense of fun that he exuded. I don’t care what anyone says about smiling on the stage. As Billy Bigelow sings in “Soliloquy“ from Carousel, “Of course, it takes talent to do that well.” I’m not going to try it. Have you ever seen anyone smiling inappropriately in an orchestra concert? It isn’t pretty.

Since the concert was titled “Play With Ray”, I’m taking the liberty of calling him Ray. Even though I never would call Heifetz by his first name, I put both artists on equal footing. They get the results they want in the same way: a flash of will and a determination to shape the phrase perfectly with sound and articulation. Whether he’s Ray or Mr. Chen, his artistry and integrity are beyond question.

I mentioned three skills that Ray demonstrated with flair: Rhythm, strong virtuosic bowing, and stage presence. Numerous other talents were on display. I’m fascinated by how these musical and technical parts interplay. They are like Russian nesting dolls, in that, one system, or cell, houses smaller cells. 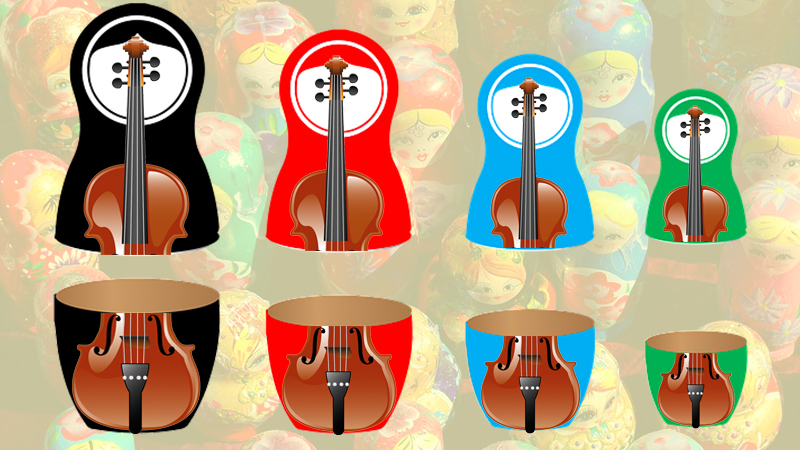 There are interesting relationships between all the compartments we juggle. Here are some examples:

A Russian doll is the picture of perfection within perfection. Violinists spends years developing an even, non-rushing tempo, while at the same time balancing the rhythm in the bow and in the up-and-down of their piston-like fingers. That’s three dolls right there. The Papa or Mama doll of this threesome would be the overall beat, complete with ebb, flow, character, and malleability. I hate to say it, but there’s a reason conductors get their big salaries. Given music’s nature to be so liquid, and its proclivity of slipping into chaos and questionable tempos so easily, the ability to create the music’s shape with the hands is highly marketable.

Those “dolls” we develop lead to bigger and bigger ones. The evenness of rhythm easily gets polished and perfected through the muscle-memory doll we develop. When Ray sees a turn in the road that involves a perfectly proportioned rubato, it’s easy for the musicians to adapt to. This process was built into their training. Composers are masters at making tempo changes and musical subtleties obvious. Alexis Roland-Manuel said of Maurice Ravel, “that mathematician of the mysterious now knew how to judge imponderable tone value by the most sensitive and accurate balances imaginable.” There are forces at work when we play. They are mathematical, highly engineered, and subject to common sense that prevail even in the face of personal whims which are at odds with the music.

When Ray plays, he hands the musicians a gift on a silver platter. This is the way I like music to be handed over. This friendly approach makes everything obvious, including the intonation, articulation, and tempo. Even the smile on his face shows that he’s happy with the result.

It’s an Intersection, Not a Garden

Violin playing is like a four-way stop sign. There are only so many details we need to deal with at any given moment. The four-way is the maximum that is required of us, and we all know our thinking gets more acute when everyone’s chomping at the bit to drive through the intersection. Fortunately, fear of pissing off someone keeps everything civil, and our minds goes through their steps patiently.

But if you make that intersection a roundabout, with landscaping in the center, our brains become strained and overloaded. It’s like navigating the intonation game in a string quartet that decides to go with “just intonation” instead of “tempered pitch.” You’re just asking for trouble.