When Does a Technique Become a Crutch?

July 30, 2019, 7:44 AM · When I visited home after my first semester in college, I spent a long afternoon speaking to the violin teacher I had for five years until I graduated from high school, Mr. Wendland. I was talking about how my new teacher was going to make my sound warmer, and how his ideas about how I should move the bow would completely change my playing for the better. 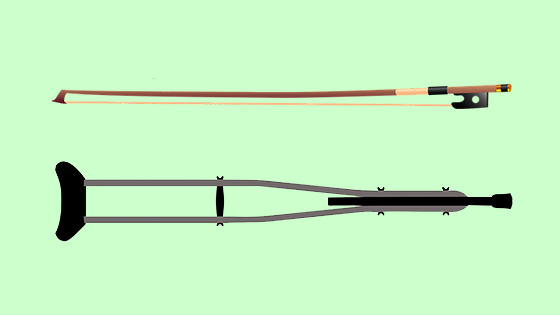 Pretty insensitive of me, don’t you think? I’m sure he had heard it all before, and his other college-aged students had similarly regaled him about finding the perfect teachers to lift their playing several notches higher. Finally, I played for Mr. Wendland, and yes, my bow arm looked newish and exhibited clunky growing pains, but, lo and behold, I was just as out-of-tune as before, and the holes and scratches in my sound happened in the same predictable places. Was it warmer and richer? No.

While it was a waste of an afternoon for Mr. Wendland, I got a lot out of it, even if it satisfied an unhealthy part of my musical education. I was justifying why these new changes were going to make a big difference in my playing. This was not to be confused with actual growth. I had actually convinced myself that a few external changes would make my technique work. Even though I was barking up the wrong tree, I had given myself a crutch which would keep me busy for four years while I was spinning my wheels.

There are as many crutches and rationalizing thoughts at our disposal for whatever our musical needs may be. They’re there because we need them, at least until we’re ready to put them aside as we discover better, more organic ways of learning.

I referred to the above example to illustrate a rather far-fetched crutch, but it still meets the definition. Technical instructions become a "crutch" when we blindly follow those instructions, without allowing the real technique to grow from our own musical instincts.

I don’t envy any teacher trying to teach a straight bow to a young student. Crutches are crucial, however, to get the player in the ballpark, so to speak. What helped me and thousands of other violinists was the tried-and-true “in with the wrist on the up-bow, out with the wrist on the down-bow.” While that gesture “simulates” what actually happens when you move your arm, it’s often done in an exaggerated way. I spent years undoing the harm that the crutch caused. While it sounds innocent enough, the “in-out” method turned my bow into a string scraper.

What should be a gentle movement in the wrist resembles almost exactly what happens when you open or close a jar. Oddly enough, you never exaggerate the jar opening because it’s completely organic and un-self-conscious. However, when you do the same while moving the bow, havoc and exaggeration ensue. Why is it that when we move the bow, our first thought goes to the least significant part of the movement, that of the wrist? The leading thought should instead be directed to the bow itself, so that every inch is guided by the mind. Caution should be the guiding principle, since the bow is more amenable to wayward paths than the correct one.

A perfectly straight bow is a misnomer, since once the connection between the hairs and the strings is made, there should be a “release” from a rigid straightness. Without the release, there is a danger of scraping the strings that I mentioned earlier. There are many organic details to think about, but the crutch of simplistically instructing the beginner tends to hide the discovery of them.

The sequence of when and what we think about is the key to discovery. If we patiently think about the path of the bow, the magical result is that the wrist will move organically, not in a premeditated and mechanical way. When we put the cart before the horse, the bow moves at the direction of the mind, not the wrist. The best use of the wrist is to passively go along for the ride as the bow elegantly finds its unique direction.

A whole chapter could be written about the natural, non-parallel bow movement versus the strict adherence to a “straight” bow. Ivan Galamian in his Principles of Violin Playing and Teaching (Prentice Hall 1962) spends four pages talking about how to achieve a straight bow, yet only two short paragraphs under the heading of “The Slightly Slanted Stroke.” I think both descriptions are necessary, but the discussion about the latter is far more interesting. What Galamian did not discuss was the negative side effects which are caused by the straight bow. Those problems are best dealt with by the performer himself. A teacher’s job is to present the options, while only the performer can recognize when a technique becomes a crutch.

I had written much about my great violin mentor, Nathan Milstein's, circular approach to The Bow, and unquestionably the Master of Bowing ~ however it is lost, so I would suggest you include mention of The Only Peer of my Mentor, Heifetz, in the name of Nathan Milstein, vis a vie, Milstein's uncanny bowing and Never being a Crutch!!! Please separate Great Bow Art from beginning ideas about Bowing!

I strongly disagree with the 'Straight Bow' Aporoach, but to avoid further swipes from many less fortunate than myself who never had opportunities to study privately with Milstein, & learn & absorb his uncanny bowing magic, I do understand there is a sincere Gap between Milstein & most violinists, & Not at all anyone's fault ~

Wishing you very well on your Article, please accept musical greetings from America!

August 4, 2019 at 05:25 PM · Technique is not a crutch, but the tools of our craft; Like a painter owning the best brushes and pigments. There is no doubt that Milstein's bowing was both uncanny and and superior, magical. But only for the sake of the discussion, I will respectfully disagree with my betters. The "straight bow" allows the bow to track on the same optimum point of contact. With all of my new students I demonstrate that by putting the violin on my lap, holding the bow with only the thumb and second finger, and deliberately set it at an angle. Vector forces move the bow lengthwise along the string, back and forth. One can use that to keep the bow near the bridge by slanting the bow very slightly. There is a diagram of that somewhere on the Warchal web-site. It looks like a very shallow figure 8. One of my teachers used this analogy: On an old steam train there is a loose joint (I don't know the technical name) that converts the linear motion of the cylinder to a rotary motion on the wheel. What we do is the reverse of that. The key is too stay LOOSE. Otherwise the friction will wear out the joint (wrist,elbow, etc.) quickly. I actually enjoy the bowing debate. Last thought; There is more than one way to play correctly, and anyone who plays better than me (most of you) cannot be wrong. More later ~ jq

August 5, 2019 at 01:32 AM · The crutch is not the technique itself. The “crutch” is when you follow technical instructions but fail to connect that with your own physical and musical instincts.

August 5, 2019 at 05:16 PM · Thank you all for your comments. Another example of a technique that can be mired in crutches is shifting. For many years I had “conditions” which needed to be met in order to pretend I was successful:

1. I had to touch the wood of the violin’s shoulder when I shifted to third position. (Kind of a “hard security blanket”)

2. My thumb needed to be lined up with the position I was shifting to. It’s unnecessary and burdensome to concentrate on that extra detail.

3. I would fudge a little to adjust the pitch after I arrived at the incorrect pitch.

4. When I learned certain formations of hands to assure one particular set of intervals within a position was successful, I precluded all of the other possibilities of other intervals.

To replace all of those crutches, I needed to measure all intervals and not take anything for granted. I needed to think of each shifting movement as unique, and feel the difference between the wrong movement and the right one, in terms of distance covered. This movement is an athletic one, with a finesse similar to how a quarterback assesses his own distance and aim.

So the crutches were replaced by more organic strategies.