Rhythm and Reading - The Art and Skill of Reading Music

May 26, 2019, 1:56 PM · I don’t put this on my business card, but I’m a violin teacher that uses the "traditional" approach AND teaches from the Suzuki books. In other words, Twinkle has become a rite of passage for budding violinists as much as the Vivaldi A minor Concerto. That’s my answer when parents ask if I’m a Suzuki teacher. When I’m asked whether I played in the first or second violin section, I answer honestly that I was in the premier section, the seconds.

Shinichi Suzuki understood the big issues. He had the vision to recognize that we process music first and foremost through our ears. Once we heard the music, he felt that other techniques would follow suit -- including reading. He also heard countless students who played the violin as if the fingerboard were flat. In other words, their minds didn’t make the mental adjustment that was required to re-orient themselves to each new string. In an extreme case of "bad physics", the first finger would drift sharper and sharper as it moved, string by string, from the G to the E. Since this type of physics is as predictable as the "good" kind, Suzuki did us all the service of publishing Quint Etudes (Suzuki Method International, 1959), with enough exercises to rewire the brain for noticing the change in the fingerboard’s planes.

The job of reading music and knowing what it feels and sounds like starts in the mind and grows with patience and reflection. I came to understand this when I learned about "audiation," a fascinating characteristic that musicians share but can be further cultivated. Edwin Gordon coined the term in 1975, which, according to Wikipedia, refers "to comprehension and internal realization of music, or the sensation of an individual hearing of feeling sound when it is not physically present." In other words, hearing music in your head. Once I heard about this aptitude that some musicians have more than others, I tried to strengthen it within myself.

Here's another important factor in reading music: the necessity to divide music so that we don’t go into information overload. This is described by the American psycholinguists L. Fraser and J.D. Fodor, and excerpted from the Dictionary of Theories, edited by Jennifer Bothamley. (Gale research International, 1993) I find that its explanation of how we read words is easily transferrable to music. Known as the "sausage machine" theory, it states that people divide sentences into parcels roughly six words long, and that they process the structure of each segment before moving on to the next segment, or "sausage." Once I started processing music in this way -- and quit rushing and gorging from note to note -- I noticed I had lots more time as well.

In spite of our best efforts at creating and being influenced by great theories, the fact remains that reading music presents obstacles that only diligence and common sense can overcome. Distractions alone account for many wrong accidentals or intervals. Practicing incorrectly, especially not keeping the rhythm proportional or not "framing" the notes that fit together, can produce a cataclysm of rushed and wrong notes. 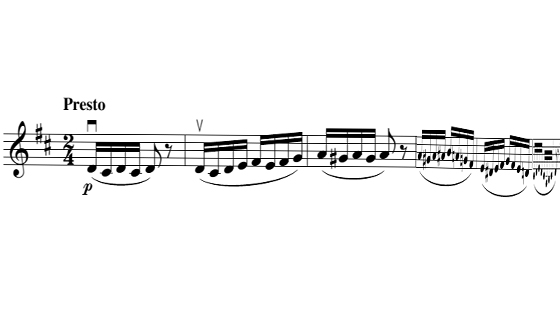 The worst-case scenario is when bad notes topple over each other, when a single mishap crashes into all the notes around it. These Nascar moments make it urgent to design a system of reading that compartmentalizes each of the musical moments. Don’t look to the bar lines to help you do that. Watch a conductor’s baton, gestures, and eyes to point out the myriad ways that music changes direction and mood. Music shouldn’t be a house of cards, but a series of self-sustaining structures. One wrong note won’t be noticed. On the other hand, one after another after another mistake…even your mother will shake her head.

Framing the Music...One Word, One Phrase, or One Sentence at a Time

For all the speed and forward movement that musicians have to deal with, we also have plenty of time to read the music as slowly as we need to. Some musical patterns and groupings come easy to us, while others take a moment to notice and digest their deviation. Give yourself as much time as you need. It feels so good to unclog a cluster that seems complicated.

If you review the notes slowly, and even more importantly, in a proportional manner, they will be with you forever, through thick and thin. Reading music as if it is unfolding in a timely manner is much more satisfying than feeling rushed. You can’t predict when you’ll be in a rushing environment, but you can be prepared for it. Your time in the practice room allows you to absorb the music the way your brain intended it, by observing the intervals, the surprises, and the emotional signals.

An additional benefit is that when you read the music at a natural pace, the rhythm spreads itself out evenly, and slower than you expected. It’s a welcome relief to the alternative, when slapdash reading makes rushing automatic. When the music is coming at you uncontrollably and with relentless speed, I call it "front-loading" the rhythm and the notes. Everything gets squeezed together, the pattern sounds congealed, and it’s vulnerable to falling apart.

May 28, 2019 at 12:08 AM · This is exactly what my teacher and I are working on...building up to the correct tempo without losing intonation and recognizing passages that take a little more time while framing them with their reference notes. Great article!

Suzanne, thank you for expressing so well the process of your practicing with your teacher. The more I understand the ebb and flow that music rides on, the more I appreciate the great performers. I’m listening to Bill Evans and Tony Bennett now, and every gesture resides in its perfect tempo, even if it’s just for a brief moment.

May 28, 2019 at 06:40 PM · I like that reference to a "sausage machine" theory. For me, each "sausage" is a phrase. In a tricky musical passage, I'll mark the beginning of each phrase if necessary. Even if I get lost, I can listen for the start of the next phrase and get back on track.

The most difficult pieces to play are those where phrase boundaries are obscured by tricky rhythms or notations. Even worse, some pieces are written in a misleading fashion. In extreme cases, I'll typeset a piece of music from scratch just to make the phrasing more apparent (or to eliminate impossible page turns).

By the way, in bluegrass the technical term for "NASCAR moment" is "train wreck".

May 28, 2019 at 07:33 PM · Charlie, thank you for the idea of marking phrases. It’s so easy in music to not see the forest for the trees. It would be interesting to put a symbol above the notes to signify the emotion that is being elicited. Another great use for emoticons??!

Thanks for the train wreck. Do you know some names for slides and glissandi that are used in bluegrass? I wonder if anyone’s ever used the term “Louisiana mudslide”. I like the term “Viennese avalanche” for sliding up to a note and sliding away from it.

May 30, 2019 at 07:48 PM · My phrase markings are usually just vertical lines, generally an extension of the bar lines that are already in the score. There are exceptions - mostly in baroque pieces - where composers often indulged in the sadistic practice of starting a phrase in the middle of a measure.

Probably the worst offender is J.S. Bach himself - the last movement of his Orchestral Suite No. 2 not only starts in the middle of a measure, but shifts phrases to the start of a measure and back again a couple of times. If I were scoring this, I would redraw it as starting at the beginning of a measure, and throw in a measure of 3/4 wherever the rhythm shifts. That's how I think about it when I hear it, anyway. (I haven't actually had occasion to do this - but I did re-typeset the viola part of Donizetti's Don Pasquale overture to move the bars, which made it much easier to read. I suspect the violins had no idea why they had to struggle so hard to keep the rhythm.)

I haven't thought of applying emoticons to the score. However, if a passage is marked "cantabile" I make a point of adding extra schmaltz. But then, I'm more of a textual guy. I should mine some Mahler scores for his lengthy descriptions. (On second thought, a quick search reveals that someone has already done this, and posted the results here). Occasionally when our conductor warns us not to let the tempo drag I'm tempted to write "Nicht schleppend!" in our score.

I don't know of any terms for slides and glissandi, except that sometimes when I'm really hamming it up I'll do a big fat greasy slide.

May 30, 2019 at 11:53 PM · I had no idea there was a glossary of Mahler tempo markings and admonitions. I think he knew the misjudgments musicians were likely to

make. He lived during the age of Freud, and he knew human nature so well. Thanks for providing us with that, Charlie.