December 17, 2019, 9:27 AM · Call me traditional, but I still love charming, Romantic music for the violin, and if it’s virtuosic and exotic, even better. I made a discovery on YouTube last September which stopped me in my tracks. Twenty years ago I found a piece called Fiddlin’ the Fiddle in a used music store in Hollywood called Globe Music. I’ve performed it many times, and its humor, charm, and vivaciousness bring smiles to audiences young and old. The composer was David Rubinoff, and I loved to share the few details about his life that I learned from Wikipedia. 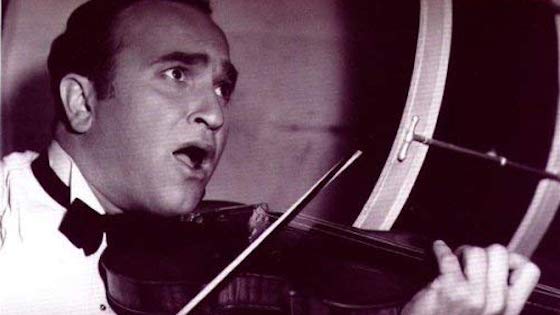 I was not prepared to find a treasure trove of performances by Rubinoff on YouTube. Typing in Fiddlin’ the Fiddle brought me front and center to a video from 1939, and Rubinoff was in his glory.

He was conducting a big band while playing his violin, and he displayed his distinct style that matched the music perfectly. And what mattered most was the trajectory of his joy from the music through his bow arm, from the smile on his face to the lightness of his step, and finally to the ears and funny bones of his audience.

As it says in the Jewish song at Passover, Dayenu, "It would have been enough," I couldn’t believe my gift from YouTube. The image of Rubinoff stood alongside my favorite visuals of violinists. His live appearance was a world unto itself, both as an emotional and theatrical performance, and as a teaching tool demonstrating soulful and romantic interpretations.

There Was More – Zino Bogachek

After the performance of Rubinoff himself, YouTube offered a violinist and pianist who recorded many of Rubinoff’s compositions, including When a Gypsy Makes His Violin Cry, Tango Tzigane, Eili, Eili, and Banjo Eyes. The title of the CD is David Rubinoff - Tango Tzigane.

I had no idea these pieces existed, let alone that there was a recording of them. Violinist Zino Bogachek and pianist Anna Balakerskaia performed these gems with perfectly balanced articulations and playful energy.

Ukranian-born American violinist Bogachek performs with the Washington National Opera at Kennedy Center. His love for salon, gypsy, and crossover classical music from the early 20th century grew from his boyhood fascination with the recordings of George Boulanger, Barnabas von Geczy, and Grigoras Dinicu.

Listening to these delightful pieces provided insight into expressive and romantic playing. Bogachek came to Los Angeles to study with Abram Shtern, former concertmaster of the Kiev Philharmonic. Shtern was a much sought-after teacher, sharing his wisdom of sound production and imaginative interpretations with many of the finest players in southern California.

December 17, 2019 at 08:10 PM · I loved Globe Music. Mr. Rosen was very kind and knew just what you were looking for. My teacher and I would go in about once a month. Just to see what was new/old. The store was a treasure trove of music.

December 18, 2019 at 04:40 AM · David Rubinoff! His widow and sons lived in Houston back when I was there and I played a concert of his music on his Strad with the Houston Civic Symphony. He absolutely had an amazing life and career and I'm so glad he's still getting some attention!

December 18, 2019 at 03:02 PM · Thank you for introducing me to two absolutely wonderful violinists!! I plan to get the CD, which will undoubtedly make my long road trips much more pleasant.

December 18, 2019 at 06:11 PM · Michael, Eventually Globe was sold to an older couple who moved the business to Pasadena. It was a labor of love for them, I believe. I think Globe has gone out of business.

@66, How exciting that you played his music, on his Strad no less. Special concerts like that stand out in our minds.

Diana, May your travels be all the happier with the abundance of Rubinoff on the CD.

Paul, one word says it all. I like your description of Rubinoff’s music. . I would also call it infectious.

December 18, 2019 at 08:15 PM · Fond memories of my father taking me to hear him play a recital in a small Pennsylvania town, must have been the early 60's. Rubinoff and his Strad. Thanks, Pop

Glad to hear more about Rubinoff +

I found a copy of the sheet music in a used book store in Allentown, PA, maybe twenty-five years ago,

and since then have never tired of playing Rubinoff's

Here we are in the Bushnell, Hartford, CT:

the final ending splash of pizzicati is different,

but mostly he did really well at writing what he plays, and playing what he wrote.

I think a tempo somewhere in between his and mine as given in videos here would really be best.

Back-up band vs. piano accompaniment is a really big difference, and matters also for a lot of choices made in performance, I think...

December 19, 2019 at 01:07 AM · Bravo, Gabriel! I actually think both tempos work well... yours and Rubinoff's. I certainly heard the harmonies better in your rendition! And I thought the piano accompaniment, while not as exciting as the back-up band, still worked really well.