Phrases Well With Others: Developing Our Melodic Talents

November 30, 2019, 2:07 PM · I wish I could have been a fly on the wall when Anne Sophie-Mutter taught Vilda Frang. This was a rare combination of a great teacher/performer working with a musician who had long ago transcended the limits of technique-driven performance. 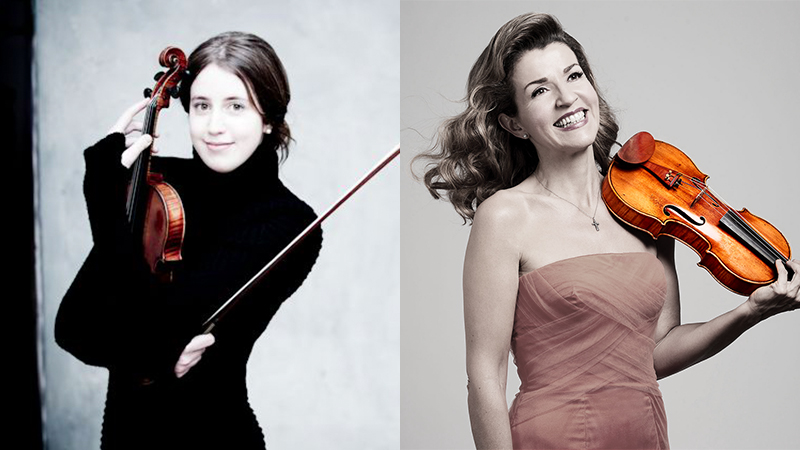 What made this pairing unique is that both musicians have the talent to see the vast amount of opportunities that music presents. They are performers whose phrases surprise us at every turn, yet always in a tasteful and revelatory way. This type of talent is perhaps the rarest, and most valuable. It hears music as a story and a language, with the technique hand-crafted for the moment.

Every great musician has a plan in mind and a simplicity of execution that draws others to follow him or her with no ambiguity. What sets Mutter and Frang apart from less adventurous violinists is their ability to re-arrange all the dynamics, rubatos, and nuances, with no less ambiguity.

Such a musical foundation starts with the ability to understand and imitate a simple phrase. It’s not that music is so complex that only highly intelligent people get it. Rather, it is a predictable, common-sense activity which you have to try hard to mess up. Bach was so right when he supposedly said that music isn’t that hard…you just have to play the right note at the right time.

There are several traits that are commonly found among well intentioned violinists who overdo the energy necessary to produce a phrase. It doesn’t take much to complicate a simple melodic contour or a rhythm which needs time to breathe. The nicest compliment we could have gotten as children would be that we phrase well with others.

The following list of phrase faults are those that have befallen me. I commiserate with anyone who has experienced them, because they’re not easy to fix. An unintentional jolt of excessive dynamics, for instance, is the result of a knee-jerk reflex. Consequently, it takes an enormous amount of will-power and planning in order to avoid it in the future.

Some of my thoughts may sound a bit extreme to certain players, and I understand that everyone decides for himself what they want out of music. My own perspective is that my history with music and the violin has included battles to change very bad habits that were deeply embedded. My language will reflect these exorcisms. I learned that pithy practice pearls spoken by teachers and written in books were not for me. The hardest obstacle in music is changing from a technique-driven performance to one that is inspired only by a well-developed ear and musical considerations. Turning one’s mind inside-out like that, and turning off reflexes that are 60 years old, necessitates some extreme language.

Going Overboard With an Ultra-Romantic Sound

Granted, the gorgeous tone that many of us strive for has its hallowed place in virtuosic string playing, but it is the enemy of perfectly shaped and proportional sounds. The authority on sound is not the gypsy who makes us cry, but the second violinist or assistant principal French horn player who shadows the first chair’s every dynamic, rubato, and articulation.

One player’s powerhouse sound may be a giant wave of destruction for the rest of the ensemble. If we knew how heartfelt a phrase can sound without any gimmicks, we would more likely seek out its essence and core. The simplicity of the piano teaches us how expressive a tiny crescendo is, and how little changes in the phrase fold in magically and subtly. The magic is gone when the sound is on steroids. The violin, unlike the piano, lends itself to unwanted distortions and rhythmic convulsions. Maintaining a musical status-quo would keep the elements in a balanced proportion.

Using Technique as a Starting Point and Getting Stuck on It

It’s inevitable that we tend to be, first and foremost, obsessed with technique. From the moment we feel the burden of getting notes in tune, the left-hand technique even makes us forget about our bow. Techniques, which should serve the music, become so dominant that they even blind us to other techniques. How did we let ourselves become enslaved to such one-dimensional thinking?

For the bow-arm to become dominant to, or at least an equal partner with the left hand, all it takes is to lead with the bow. Whether we like it or not, nothing happens on the violin without the brain getting involved. If it’s done on an unconscious level, the odds are that the left hand will dominate, if only because there seems to be more things that can go wrong with that hand.

The ability to change perspective is one of the greatest gifts music gives us. With a slight shift in thinking, we can listen to our inner voices and change the flow and direction of the music. While it will necessitate some technical adjustments, we can appreciate how technique becomes a tool to make a good product better, rather than a system of weaknesses and engineering mishaps that bog us down.

December 3, 2019 at 03:18 AM · Amen, Paul. Well written. But for most, to play without worrying about technical challenges falls into the category of "nice work if you can get it."

December 5, 2019 at 03:14 AM · Beautifully written, as always! I’m keeping your comments about phrasing and blending in mind this week as I prepare for an important concert. Phrasing well with others is turning out to be quite a joyful experience. Thank you for another great article!

December 5, 2019 at 01:47 PM · Paul, Technique will always be a thorn in my side, as I think it is for everyone, in their own way. It reminds me of something John Grisham, I think, said about the law. “It’s never easy. You just get better at it.”

December 5, 2019 at 07:12 PM · All that is consistent with my experience. The technique-focused versus the musical-focus performance. I find it helpful to imagine how a singer or another instrument would sound. Once they learn their craft, singers have less technical barriers between their brain and their sound--"don't think about singing, just sing". And a good clarinet player can do marvelously smooth attacks and releases.

There are multiple levels of learning a piece.

1) play it from the printed part.

2) play it from memory, thinking about the left hand,-the notes.

3) transfer the mental focus from the left hand to the right arm. This is really hard, it takes courage to trust your left hand.

4) Finally, think about how you want it to sound. I am rarely able to do that, and only with the easiest, short memorized passages. That shows how far away I am from those big-name soloists.

December 5, 2019 at 10:39 PM · Very well written, Joel! You mentioned that only with short memorized passages can you play the music the way you hear it. I have a slight variation on that idea. I give myself the opportunity to play a very short passage exactly the way I want to hear it. It may not be practical, but it’s a great exercise for my playing and thinking.