Playing on the Beat, In and Out of the Orchestra

June 30, 2018, 1:03 PM · There were two things I remember my high school conductor said to us over and over: “Stop talking” and “Play on the Beat”. My memory is that it was harder at that time to keep my mouth shut, but as I got older it became increasingly difficult to play on the beat. Being in sync isn’t as easy as it may appear. I could feel the flow of the orchestra from bar line to bar line, but my inner triplets were a little too carefree. Another trap I encountered was that I could follow the well-defined and proportional conductor’s beat, but I wouldn’t notice that he himself was drifting, unmoored from the orchestra. 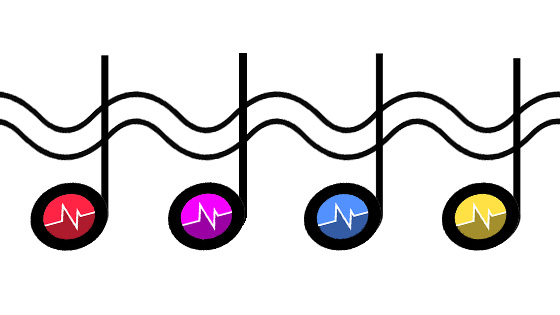 There is an effective exercise which helps keep us flexible enough to not only blend with, but also augment the sound of the other musicians. It involves increasing your sound while keeping the beat the same. The exercise teaches us to keep our sense of rhythm and notice how our perception of texture and phrasing can easily by transformed. By feeling vulnerable to music that is changing its rhythmic center, you can be ready for it when it happens in a live performance.

This exercise was demonstrated by my college violin teacher Broadus Erle, model train aficionado. and esteemed leader of the Yale Quartet and New Music Quartet. The effectiveness of the exercise is demonstrated by the number of concepts it elucidates. As I get older, it sheds light on sound, rhythm, and musical phrasing.

Play a note with a thin, soft sound for four beats on one bow. Increase the sound and intensity incrementally, while using the same amount of bow, until you’re playing with a huge, rich sound. This exercise will make both the rhythm and the space filled by the sound feel a little different, and you’ll have to work a little harder to fit the various components into a seamless package.

By inflating the sound and enriching its character, you can use this exercise to predict what other players will do with their own sounds. If you can identify and quantify what your colleagues are doing with their dynamics and their phrasing, you’ll be alert enough to make those adjustments yourself.

What We Learn from Rushers

Playing on the beat is a double-edged sword. For some obsessive musicians, laying down the beat is like laying down the law. I remember a stand partner I had at Brevard who insisted that most people play behind the beat, and so consequently he ALWAYS played ahead of the orchestra. It was no surprise that when he got to lead the orchestra in a conducting class, the only thing he could say to us was to play on his beat. What he didn’t know was that the great conductors may say that once every few months. They are careful not to tread on a problem which most of the time is the result of the conductor’s deficiency.

What We Learn from Karajan

On the other hand, some of the greatest performers have a complex if not uncomfortable relationship with playing on the beat. Herbert von Karajan often appeared not to be on the same beat with the Berlin Philharmonic, but his intentions were always crystal clear. No heroes were needed in the orchestra to show where the beat was supposed to be. Between the unified efforts of the musicians and the iron will of Karajan, his beat was not vague, just colorful and poetic.

What We Learn from Streisand

In the biography of Barbra Streisand by Anne Edwards (Little, Brown, 1997), the author relates the time that the singer returned to her roots of recording Broadway songs. Streisand had spent several years recording songs, driven by a rock-and-roll beat, to appeal to a younger audience. She was happy to return to more soulful, languid interpretations of songs that depended on sophisticated rhythms. The constriction imposed by an incessant beat made her long for the ballads she sang in her earlier career.

According to her biographer, Streisand said it was not easy for her to sing on the beat when the rhythm and the arrangement were fast and unrelenting. Coming from a musician of impeccable skills, we could learn a lot from reading between the lines of what she said. She starred in Funny Girl on Broadway when she was 22. Her voice and musicianship were capable of achieving any emotional and expressive nuance that the music and the lyrics called for.

There was no question that she could sing on the beat. The complications arose when her talent for thinking of musical possibilities that were both natural and beautiful was hampered by musical boundaries that were too restrictive.

Each of us has a unique process in which we approach rhythm and music. The more sound and texture we hear and the more details that we absorb, the greater is our ability to see the boundaries of each pulse. Playing on the beat is easier when the music unfolds within an orderly, expansive structure. Something is wrong if beats become compressed. Every pulse gives us the opportunity to fit notes and bow distributions as evenly and organically as a rainbow fills space. Music has a wonderful way of describing nature. It’s nice to know that nature can describe music as well.

July 1, 2018 at 03:07 PM · Great post! I don't know of many writers who could successfully weave information about Karajan and Streisand together in the same article! Can you elaborate a bit more on the Broadus Erle exercise? Would this also be a way to help students understand that louder doesn't always equate with faster, and vice versa?

July 1, 2018 at 03:30 PM · I love metronomes. They enable us to be in the general vicinity of the phrase’s beat. They are as valuable as tape on a fingerboard to a beginning violinist. The only problem is that a metronome doesn’t tell you if you’re not with it.

( Are there any inventors out there that can create a metronome with that feature?)

July 1, 2018 at 04:54 PM · The Broadus Erie exercise has a direct application to the scourge of all youth conductors, that kids play faster when the music gets louder, and vice versa. When you create change within a fixed beat, like playing with a deeper,louder sound, you still need to adapt it within the given beat.

If flexibility isn’t a part of the music-making, the music will be the victim.

July 1, 2018 at 09:28 PM · Whatever happened to Tomita? If there was ever music that was strictly on-the-beat it was Tomita's computer generated precision. Unfortunately, once you get past the novelty, it gets boring because it's a machine, not a human.

We want to play together but every conductor, every leader, every duet/trio/quartet/... leader has their own idea of how the music should be played and it is rarely a strict reading of the written music.

Personally, I like the metronome to get the general pace of the music into my playing. As a person who prefers duets as my outlet, listening and paying attention, lengthening or shortening a note to stay with my partner is a whole lot more important than trying to be a machine.

I remember the advice given by the conductor of the first orchestra I played with: "If you make a mistake, please make it loud so that it's interesting!" We got over our fear of making mistakes and actually paid attention and by doing so played better.

Music is a human activity based in emotion, making it mechanical or computerized only makes it boring - just ask Tomita-san.

July 2, 2018 at 02:47 AM · Your first conductor had quite an impact on you, and I applaud you for giving him credit. I’m sure he or she would be feeling great if she saw this.

July 4, 2018 at 03:19 AM · The hardest thing for some beginners is to wait for the next beat before changing bows. It's like some of them feel they need to have already moved their right arm before the beat happens. Waiting to start the next movement when the clap happens is quite a coordination challenge for some.

July 6, 2018 at 04:28 AM · You bring up an excellent point, Robin. The feeling of “anticipation” can help us stay with the beat and the orchestra, if we feel the same anticipation the conductor is generating. On the other hand, sometimes the music needs to play itself out until the end of the phrase, or the end of the bow. Good ears tell us when to move forward and when to savor every moment. If one has the habit of beating everyone to the next bow or next beat, I call that syndrome “destination disease.” It afflicts all of us.