Allowing for Instinct in Violin Technique

December 17, 2018, 12:35 PM · Do you ever wonder about the curious relationship between the simplicity of an exercise and the relative difficulty of executing the technique? For instance, playing in tune is a lot harder than aiming your fingers on the tape placed on the fingerboard. Another example is trying to play pizzicato after being told to use the flesh of the fingertip rather than the nail. By the time I figured out that I was overplaying the pizzicato, I had wasted years producing plucked, distorted tones.

Of course, most of us want our teachers to give us simple sounding instructions, with the belief that our playing would improve. For years I truly believed that hope springs eternal and waited in vain for this or that teacher to fix my problems.

The curious truth is that I had to discover on my own how to make the violin sound natural. 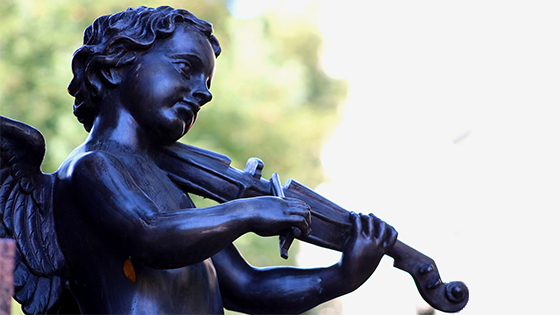 Some of the step-by-step techniques imparted to me fell under the category of "sounding good on paper but doesn’t work." One teacher had a unique bow hold that her students called "the claw." She felt confident enough to teach it to all her students, even though it was grotesquely structured and far from flexible. I did learn one thing from her teaching style, however: find out what works for myself and then describe it in my own words. And then don’t teach it to someone else. Let my student discover his own method. One person’s method is another person’s madness.

Trial and Error and Perseverance

After the teacher’s work is done, the student goes home after the lesson with new descriptive phrases. As far as the right hand goes, words of lightness and sostenuto may be in the air. On the other hand, an extreme change may be prescribed, like a Franco-Belgian bow arm replacing a Russian bow hold. Thoughts of a major overhaul may cast a pall over the player’s brow. A red flag should go up in the student’s mind if the teacher asks for a major change as opposed to working with what the student already does. A good arm vibrato that needs a slight overhaul is doable. On the other hand, changing to a wrist vibrato can take years. What’s the point, if the arm vibrato comes more naturally?

The good news is that many small changes add up to huge improvements. Building sound is a good example of how an encouraging teacher can pinpoint goals without tearing the student’s technique apart. Sustaining at the different ends of the bow is one place to start. Giving him healthy ways to play “into the string” without forcing will fill his brain with useful and organic thoughts.

No one ever improved with neat sounding philosophies that were thrust on a student by professors that taught by panacea. Music is unique in that things stay the same until they become different. (I know that sounds odd, but it reminds me of the obvious “the shortest distance between two points is a straight line”.) I’ve played in orchestras where the conductor would take it on himself to solve the orchestra’s Achilles heel, would succeed for the briefest moment, and then realize that the orchestra would revert to its traditional ways before the double bar. The smarter the conductor, the more respect he has for the musicians, and the less likely that he will obsess about their so-called fatal flaws. Carla Maria Giulini and Simon Rattle come to mind. Their own visions were more important than dissecting the musicians they were working with.

When fellow musicians in the orchestra start judging and disparaging each other, it shows how little they understand ensemble playing. We learn to think more clearly and rationally when we understand how much more we can improve our own playing.

Exercises and concepts we’re given by our teachers and what we learn in books only open the door to our development. The greatest joy in music comes from knowing how much sheer perseverance lies behind our personal discoveries. Just because a teacher may suggest how the bow hairs get into the string, it is not as valuable as understanding it yourself.

The instruction we get follows us into the practice room, where we get our opportunity to develop and own our beliefs. The core of musical communication is sound, and we must believe and have faith in our personal understanding of it. There’s a certain sound that we associate with violin playing: warm, rich, vibrant, filled with direction, fluffy, conversational, emotional, etc. Our bag of tricks imparted in our lessons includes getting into the string, speeding up when you change bow, wrist turning inward on the up bow and outwards on the down bow, etc. However, every measure has a slightly different bow distribution; sometimes the wrist doesn’t need to move during a bow change; the slant of the bow can point towards the bridge; the bow is anything but straight. Such is the complexity and brilliant logic of the violin. Anyone who merely follows the rules misses out on the hidden beauty and unspoken structure.

With knowledge comes confidence. During a performance, when lots of choices need to be made, every phrase gives us an opportunity to trust our instincts. Rather than holding back during a shift, we can break out of our physical bounds and play with a smoother, more directed, movement. We jump hurdles, and just when we’re faced with an important crescendo, or we change colors for an intimate harmonic change, we make the choice to put everything we have into it.

Music is full of such moments. Only our confidence and drive are the stimuli for really clearing the hurdle.

December 17, 2018 at 10:08 PM · "The curious truth is that I had to discover on my own how to make the violin sound natural." We all did and our students will have to do the same. We discover that the only music that is valuable is that that we own when we perform. While that may be a part of an orchestra or chamber group, for the music to be valid we have to own it.

Playing any instrument well is difficult and your most vicious critic is yourself.

December 17, 2018 at 11:27 PM · A well-written article and the best advice for every teacher and violinstudent. It is remarkable that the oldest violin instructionbooks were called violinschools (école de violin, violinschule) and they were less instructive than the so-called methods dating from the last decade of the 19th century on, a time in which the idea arises that many solutions in daily life could be solved by a technical and moreover mechanical way. During my years as a student, I read a lot of these treatises, looking for the golden road to violinistic mastership. Today, after a career of 40 years as professional violinist in an outstanding orchestra, I am still amazed by how a different but unique thought or feeling during hours of study can enhance your violinplaying and the funny part is: I have no idea how to instruct others to do and feel the same.

December 18, 2018 at 08:25 AM · Paraphrasing Suzuki, knowledge is not technique, technique is knowledge plus ten thousand times (of practising).

You develop your own physical way of producing the desired sound.

December 18, 2018 at 03:19 PM · I loved this article on so many levels. To "develop and own our beliefs" is what makes us shine as individual artists (and people). We are so desperate for quick fixes and cute slogans. And playing the violin certainly doesn't lend itself to either! One of the few perks of getting older is having perspective. We can actually look in the rear view mirror of life and see how our instincts helped us... as well as how detrimental things can get when we ignore our instincts. Thank you for so succinctly and compassionately delivering such a vital message.

December 19, 2018 at 04:37 PM · One of my teachers, somewhat famous, so I won't mention her name, had a proverb, often repeated; "The natural instincts for playing the violin are all wrong". So much of violin technique is counter-intuitive. That's why it has taken several centuries for the violin world to figure out how best to play, several topics are still controversial, and self-teaching usually doesn't work. A quality teacher makes a big difference. Other instruments, and singing, have this same counter-intuitive problem, more or less. Guitar and piano has more success with self-teaching, maybe because you can see what you are doing, and intonation is not an issue.

December 19, 2018 at 06:25 PM · George, you bring up an interesting point in that we are our own worst critics. Wouldn’t it be wonderful if we treated ourselves as well as we treat others?

135, I’m fascinated by the discoveries you made on your own. I imagine many of those were made in an orchestra setting, as were mine. Orchestras are a unique laboratory, in which an amazing product is produced by jaded musicians and frustrated conductors. Such a disparity of desires and talents produce a lot to think about, and a lot to be proud of. Also, thanks for your enlightening discussion about early violin treatises and more recent methods.

153, I appreciate the quote of Suzuki. Brilliant!

87, your discussion of perspective and how it changes as we get older was really helpful. Every time we pick up our violins we can look in the rear view mirror. An insight we had yesterday can make us change something today.

Joel, teachers have three roads they can follow: teach us to think for ourselves, be very specific about what we need to learn, or a combination of both. Thank you for your insight into the difficulty of learning the violin on your own.

December 19, 2018 at 08:51 PM · This is so true...Trusting one's instinct is good (to some extent of course). I noticed that with my 6-years old beginning violinist son. After a couple of months of formal training based on Franco-Belgian bow hold by both me and his teacher, he naturally switched to old school Russian and guess what - it suits him well. Ever since he adopted this posture (which totally doesn't work for me, classically trained in France), he plays better, has a straight bow and a delightful little sound (no screeching) :-)

December 19, 2018 at 09:29 PM · Kudos to you and his teacher for encouraging your son’s natural instincts. I believe the warmth and flexibility of our sound has little to do with the choice of Russian or Franco-Belgian bow hold. It’s more about how the hairs engage the string and our ability to match the sound in our ears. It sounds like a musical ear and spirit are guiding him. Cherish that!!

December 21, 2018 at 04:55 PM · Your curious truth is mine also. Sure, I can read in a book about sound point and "weight" and such, but at the end of the day, you find out for yourself by playing slow scales how to make a good sound. Teachers can guide the process to be a little faster (for example translating what one has learned to other strokes) but I'll bet a lot of violinists learn to generate tone this way. Same with vibrato -- teacher can get you so far, but ultimately you have to experiment with the way that your joints move until you get the sound you want.

December 22, 2018 at 12:40 AM · Paul, I agree with your experimenting with the way our joints move until we get the sound we want. Somehow, muscle memory becomes a major and complex factor in our technique. I’ve learned that remembering what “not” to do is as important as remembering what to do. Can we quantify the difference between a dark and a bright sound? You bet we can.