How Violinists Find Common Ground in an Orchestra

November 5, 2018, 11:53 AM · Occasionally parents of my prospective students ask if it’s better to start their children on the piano before they take up the violin. It dawned on me recently that the opposite is likely more advantageous, that introduction to the violin and the ensemble work that accompanies it would make for a better pianist. String players learn very early that being a part of a group is an important component of how rhythm and melody, as experienced by the group’s playing, define everything one does as a soloist. I would add harmony and dynamics to that, since one change in either creates a domino, or ripple, effect in the interpretation. 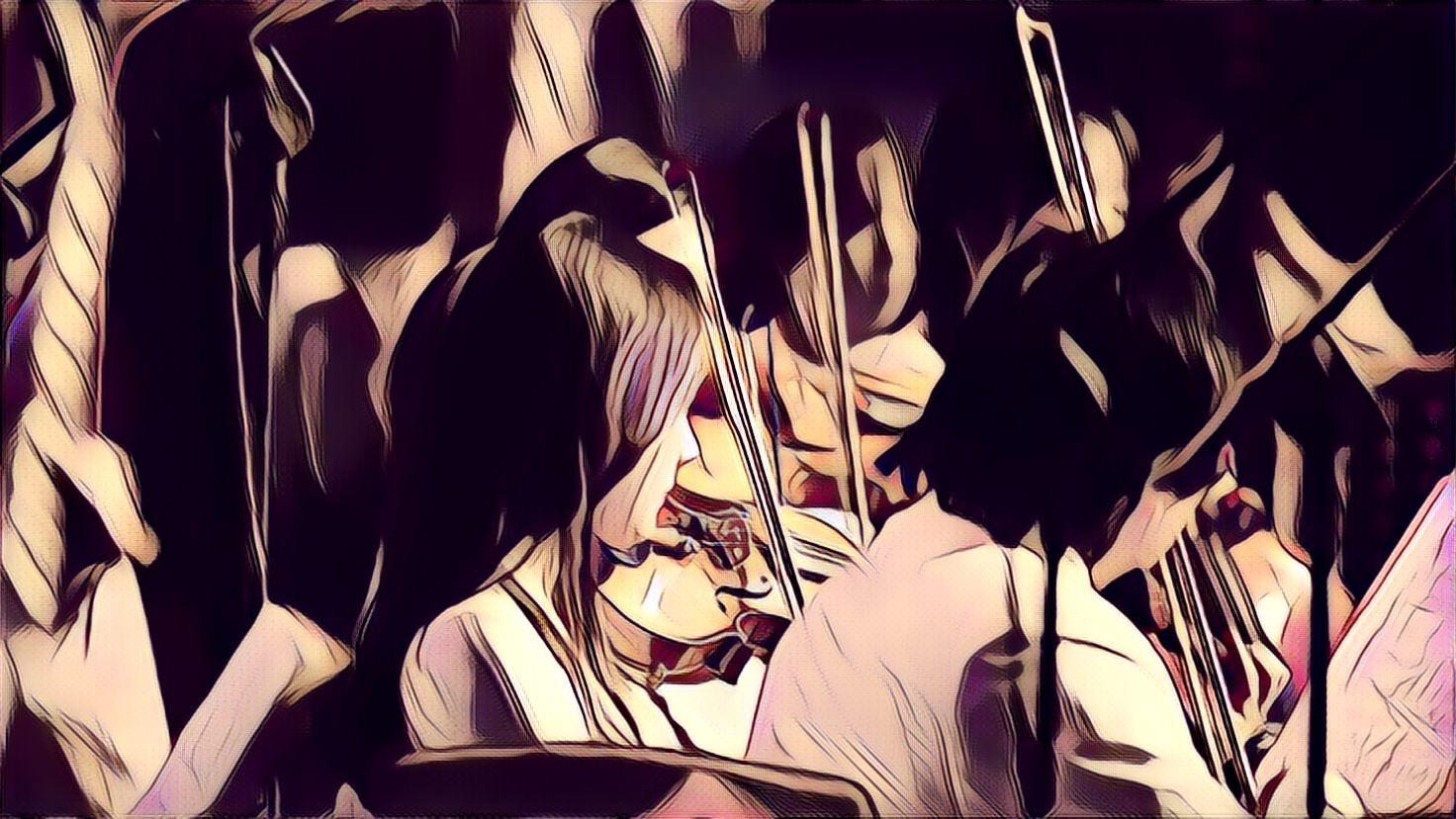 My first ensemble experience was when I was eight and was conducted by Franklin Washburn in Dallas. This youth orchestra was my first clue about the rules and guidelines of an orchestra. When six stands of violins play together, the celli are playing triplets, and the conductor is beating time clearly and regularly, you’re dealing with a perfectly defined system. Notwithstanding some scratching and some crashing in a moment before the beat, there was comfort in the experience of unified beats and dynamics. Musical proportion was there for the taking. Let’s just say that few if any of us knew intellectually what we were experiencing. Nonetheless, the beauty of its message affected us subtly at first, then gave us something to quantify and define for the rest of our lives.

The Gentle Magnetism of a Phrase

Is there an exercise which teaches us to listen to the prevailing phrase and adapt all our technique to serving it? Lathon Jernigan, my middle school conductor, had us play scales together at different, unrelated tempi. He would indicate hairpins (gradually getting louder, then softer) and large dynamic differences. He would remind us, during all this flux, to maintain a uniform, blended sound. Like in any phrase, it takes a careless moment of not-listening to unhinge from the group, the musical path, and the timbre when playing scales.

The Unwritten Rules We Learn From an Orchestra

There are two things we try to impart to our students. The first is the basic techniques that get our fingers and arms to move in the right directions and land on the right notes. The second are the secrets that came to each of us that we learned the hard way. Sometimes it was a realization that the solution to a problem turned out to be the exact opposite of what we had done up until then.

Orchestras have been my main conduit to music, and now that I’m retired, chamber music offers a completely different perspective. The complexity of groups playing with and without conductors lets us unravel the mysteries of rhythm, timbre, and dynamics one paradox at a time. My memories are filled with wonder and moments of understanding how the system works.

Many musicians know all too well that it was their own struggles that motivated them to go into teaching. Paulette Jiles writes eloquently in her novel, News of the World (William Morrow), “Maybe life is just carrying news. Surviving to carry the news. Maybe we have just one message, and it is delivered to us when we are born and we are never sure what it says; it may have nothing to do with us personally but it must be carried by hand through a life, all the way, and at the end handed over, sealed.”

While the stirrings and emotions of music draw us to it in our early years, it is the understanding of how our bodies and minds adapt to it that add the years of richness and discovery. Albert Einstein revealed a secret that musicians can appreciate when he said that, while music hinted at the mysteries of relativity, it was specifically the violin which brought him even closer to it.

Do you find yourself rushing through a passage, unable to regulate the detache? Since bow techniques are not dependent on breathing, and since violinists can fall prey to “one-line thinking,” it’s easy to become detached from the conductor and ensemble. To fix this problem, give each important note a subtle consonant sound to give it the same depth you would ascribe to the human voice.

Singers have a built-in advantage of defining rhythm because of their necessity to enunciate words. Violinists have nothing that prevents them from rushing. The bow lends itself to hastening bow changes., Even though the up-bow has to work against gravity, thus slowing down the momentum, the down-bow can move so fast it defies rhythmic regulation.

The orchestra is the perfect laboratory to hone the internal skills of each string player. Because it provides a healthy and rhythmically sound musical outcome for the performer, it gives him the opportunity to develop his own internal structure for the music. The ensemble in its most sophisticated form is an equal partnership between the sensibilities of both conductor and performers.

The most essential ingredient is realizing the flexibility of a consistent beat. Music breathes and it ebbs and flows. When a player has difficulty remembering the beat, he needs a way to recall it, both aurally and with a securely defined mental or visual image. The musical component of our minds welcomes even the image of a brick, the most unbending representation of length, to serve as a reminder of the “general” span of the beat. The reason that a brick can serve our rhythmic needs is that our ears will make it very clear that the length will vary just enough to reflect the nuances of a phrase.

Claude Debussy was no doubt frustrated with orchestral musicians who protested his new ideas about timbre, rhythm, and form. One jokester was so unhappy with La Mer that he made a small boat out of paper to push from musician to musician on the “wooden sea” of the stage.

Out of the depth of disappointment with bad rhythm, Debussy wrote to a friend, “You know my opinion of metronome markings: they are right for a single measure, like ‘roses, which exist but for a morning,’ only there are ‘those’ who don’t hear music and who, because of this, use the markings to hear it even less.”

This is a great lesson coming to us on the 100th anniversary of Debussy’s death.

November 5, 2018 at 09:20 PM · However, how can an adult form or join an ensemble, if you are still intermediate and learning? I minimally need to be at Suzuki book 4 before I can audition. Frustrating.

November 6, 2018 at 01:54 AM · There are orchestras at community colleges which may be happy to have you be a member. Some music schools have adult ensembles that you can join. In the meantime, ask your teacher to assign you some duet music you can play him or her. Or play duets with a fellow adult student. The Pleyel duets are nice.

November 6, 2018 at 02:40 AM · I studied violin and piano in parallel. I would have to say that I learned more about music from the piano, even though I worked about equally hard at both and enjoyed both about equally. From the piano I learned more about rhythm -- things that have been quite advantageous as an (amateur) orchestral violinist and violist. More about theory and harmony, counterpoint, composition, improvisation. Also pianists learn sight reading much earlier. Possibly this is because the traditional disposition of the violin teacher is not oriented toward that other side of musical education, preferring (perhaps out of necessity) to emphasize technique, especially intonation, bow control, and tone production.

November 6, 2018 at 04:57 AM · I actually wish more options were usually presented to young children than just violin and piano. I get that the wind and brass instruments are pretty much one size fits all and that they have to be started when you get big enough to play them, but we could definitely introduce viola, cello, other percussion instruments, harp, guitar, and more. Just playing an instrument period will benefit all musical skills.

November 6, 2018 at 12:05 PM · In our community a lot of the little kids start on Suzuki guitar. There is a charismatic local teacher who has built a strong program.

November 6, 2018 at 01:53 PM · Great article! I started violin first and then added piano a few years later. I think starting on violin truly helped me to refine my ear and understand just how difficult it is to create a pleasing tone. Of course it was frustrating at first, but quite quickly became a gratifying experience. I think if I had started on piano first, I might not have had sufficient patience for the violin. My violin teacher also formed ensembles with her students at very young ages. I absolutely lived for those experiences. It gave me such a great sense of progress to be able to play with others and keep up! Many of the other children were more advanced than I was and I found that to be incredibly motivating.

November 6, 2018 at 06:37 PM · HI Stephanie. You should research "New Horizons International Music Association." Orchestras for players of all levels. There may be one close to where you are, or you may be able to get one started. I just joined a newly created orchestra and it is so much fun.

As Paul noted many communities have orchestras that aren't demanding. Many are intergenerational and having a struggling adult next to a young musician at the same level makes for interesting life in the orchestra. There is also the Late Starters Orchestra which is based in England but has become sort of a movement (and there is a book by the same name).

It does take stepping out of your comfort zone and a commitment to making it happen. Many of us on this forum play(ed) with these orchestras.

Note to Paul: Yes it was my struggle to fulfill a teenage wish to learn the violin that now has me teaching some students who otherwise would never get the chance. When you realize how much you had to work it makes it easier to teach somebody else. Those who never struggled don't know how difficult it can be and cannot communicate the way to make it all come together.