February 7, 2022, 12:04 PM · There are three concertos from the 1700s that virtually every violist will end up playing. Most viola players' first concerto is the first known viola concerto ever written-- by Telemann some time between 1719 and 1724, so in the Baroque era. The other two are from the latter part of the century from the Classical era-- by Stamitz and Hoffmeister.

Most viola concertos were written in the 20th Century, and most of those composers wrote the cadenzas themselves. In the 1700s, the composers left it up to the performers to come up with something.

(BELOW, Scott reading through his cadenzas for the Hoffmeister, Stamitz, and Telemann concerti:)

I like all three works but on musical grounds my favorite is probably the Telemann. Why isn't it programmed more often? Because it's thought of as a student concerto. It's even in Suzuki (book 4). Since there are opportunities for cadenzas in the first and third movements, I wondered if some technically more-advanced cadenzas might make violists more comfortable in programming it.

That got me thinking that the cadenzas I was already familiar with for the Hoffmeister and Stamitz were also generally only at the technical level of the concertos themselves--- whereas for many violin concertos, the cadenzas are considerably more difficult that the material in the concerto.

I didn't want to take things *too* far, but this is what I had in mind when writing these cadenzas. As Stamitz is the most difficult concerto, I gave it the most difficult and longest cadenzas. Telemann is the easiest, so I kept those short and skipped the tenths. Hoffmeister is somewhere in the middle.

I hope you enjoy the cadenzas, and if you'd like a free copy of the sheet music, just visit our website (www.violaduo.com) and fill out the 'contact us' form letting us know you'd like them! 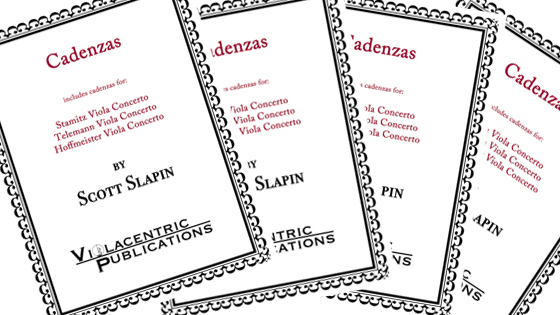