As a Violist, Does It Really Matter What Notes You Play?

February 15, 2021, 9:53 AM · There are so many composers whose last pieces were for the viola. Bartok died in the middle of writing his viola concerto. Shostakovich's last piece was his viola sonata. Bloch didn't finish his unaccompanied viola suite, and Reger had only begun his fourth solo suite. This leaves the composers' intentions as to even the actual notes unclear. (I've had composers joke with me that they didn't want to write a piece for viola because they were worried they'd die while writing it!)

Then there is a second category that creates confusion: transcriptions. Violists play more transcriptions because most of the biggest name composers from before the twentieth century didn't write much solo music for the viola--- and for the most casual of audiences, this is the music that's most popular. So we play Bach Cello (and Viola Pomposa) Suites, Bach Sonatas and Partitas and Paganini Caprices for violin, Schubert's Sonata for the Arpeggione, and Brahms' Clarinet Sonatas, just as a few examples from a much longer list. 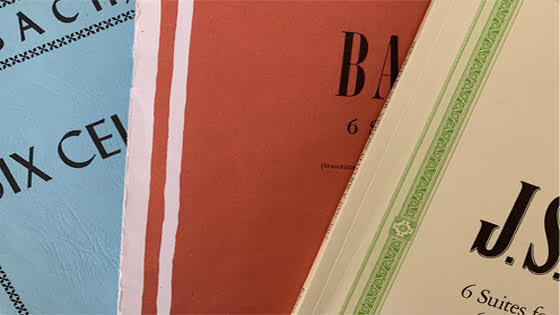 As all of these pieces were written for other instruments, there is the issue of how much the material should be altered when transferred to the viola. In the case of the unaccompanied violin music, it can all just be played down a fifth (though I'm aware of simplified versions of some Paganini Caprices, I'm not aware of anyone doing that with the Sonatas and Partitas.) But it should be noted that the violin is the closest instrument to the viola.

When we get to the cello and arpeggione, other issues start to arise. The first four Bach Suites work 'as is' an octave up from the original, but no. 5 was actually written for lute so in order to preserve a remnant of that tuning, Bach had the A string tuned down to a G. If played on a viola in standard tuning, this necessitates a few changes to some chords. Much more problematic is the 6th Suite, written for a five-string viola pomposa. With the right viola and right acoustic, it *can* be played all up the octave, and I've done so a few times.... but it rarely is. (I'll admit that circumstances have to be *just right* for that to work; it is pushing things to the edge, as with the unarranged Paganini Caprices.) All other solutions for a four-string viola involve lowering octaves mid-movement here and there. Some versions stick with the original key of D, while some put the piece in G--- which, as long as you're going to alter the original material, might be the better solution.

So far I've discussed only *unaccompanied* music. In the case of the sonatas with piano, the piano parts are kept the same. For instruments whose range is below that of the viola's, this presents an insurmountable problem if your goal is to keep the original material entirely undisturbed. If you move everything up an octave, it won't relate in the same way to the piano part. If you only move up the sections that go below the range of the viola, then you've changed the shape of the solo line. Because of this, there are many versions of the Schubert Arpeggione Sonata, as everyone will come up with their own preferred solution. (There is even one I'm aware of that puts the entire piece in a different key.)

While Brahms himself did make arrangements of his Clarinet Sonatas for both violin and viola, we know he was not happy with how the viola arrangement (featuring a lot of lowered octaves) turned out. So you can hear many versions preserving either all or most of the material in the original clarinet octave, and you can hear many versions which keep much of the material lowered an octave with the argument that while it does change the shape of the line and how it relates to the piano part, it better fits the timbre of the viola.

Every viola and violist is different. I tend to prefer keeping as much of the original material as possible, which means playing high up on the viola. I know some think only the C string is what makes a viola different from a violin, but really all the strings have a different sound from the violin, and I quite like the sound of a viola A string high up (assuming it's the right instrument!)

Also, I knew much of this music before I ever took it up on viola. As a kid, I listened to my mother play the Arpeggione Sonata and the Sixth Suite on her cello--- and cellists usually play the material as is. For an audience already familiar with the music, the alterations will be obvious. However, many violists do learn this material on viola unaware of the changes in their editions and the other possibilities available to them.

I think another consideration is that some of this music isn't always used as concert music--- there are some Paganini Caprices that are more studies than concert pieces, and actually many wind and brass players play unaccompanied Bach as etudes. In these instances, obviously rewriting the material to fit the instrument defeats the purpose and challenge of learning it.

I think violinists and cellists don't struggle with these issues as much because transcriptions are not such a large part of their core repertoire and because for whatever reason not as many composers have died while writing their solo music! Because of this, violists have to be also to some extent composers---- because we're not just provided with a composer-sanctioned version of the notes to play from.

I am both a composer and a violist. I have written music both for the viola and for the violin. Some of my solo violin pieces I transpose down a fifth for the viola others I don't. Those that I transpose I also write as sheet music, it is easy to transpose the sheet music once you have typed it into a computer notation program. This means that when I have transposed and printed it out it now exist as an official version for viola from the composer's hand.

Some of my pieces I like for one type of instrument only, so those I don't transpose.

Pices I have written with more than one instrument I usually don't tranpose, but it can happen that a piece of music works fine for more than one type of instrument. Like I once wrote a piece for french horn and piano. That piece I have also made in a version for bass clarinet and piano after talking with a bass clarinet player, but there is no transposing even not octave transposing. The music can be played on either instrument as it is, and actually fits both instruments.

Bach's solo pieces for cello (or Viola Pomposa) are great on viola. Some of them are also played on violin. In the Suzuki violin school there are some of those. They are fine for violin. Bach's solo violin pieces are wonderful on viola; but when there are double stops there can be some finger stretches which are really hard on viola.

Violin music that goes up in very high positions, might be really difficult if transposed to viola, since the body of the viola is big it can be hard to reach very high notes.

February 15, 2021 at 09:33 PM · I feel this really hard. One of my pandemic learning projects is rounding out my (initial) learning of the sonatas + partitas + suites on viola, and I've been beating my head against the wall regarding the 6th suite for a while now. Even though it sounds so much more resonant in the transposed key of G, there's something hair-raisingly fun about playing it the original key. That said, I'm quite torn about whether the result is performance worthy, or if I'll keep it to my private enjoyment.

February 15, 2021 at 11:32 PM · Scott - a very interesting take on the problems of music for the viola. I am frankly grateful for any music I can get that has been written or transcribed for viola and am relatively forgiving in terms of the issues you have raised. A lot of the pieces that are transcribed or adapted for viola, e.g., Bach Suites or the Arpeggione, are a wonderful addition to the violists repertoire regardless of what problems they pose in terms of relation to the original. One set of pieces you did not reference are the Bach Sonatas for Viola da Gamba and Continuo. They are written for the Gamba's high register and can be played with very little change by violists. They are wonderful pieces.

February 16, 2021 at 10:25 AM · I spend some of my retirement (+ lockdown!) transcribing the exquisite gamba suites by Marin Marais, Sainte-Colombe etc for viola, 2 violas, or viola & cello.

I usually transpose them up a perfect fourth to make best use of the four strings, with fewer clumsy octave shifts, or grumbling semiquavers on the C-string

The world is our oyster!

Lars, yes, I also make arrangements of some of my pieces but not of all. And as you wrote, while the technique of playing violin and viola is very close, the character of the two instruments is quite different. Of the nine pieces I've written for unaccompanied viola, I've only transcribed one for violin--- (and I'm not sure violin players would accept playing a transcription of viola music!)

Arjun, If you're interested, I made an up-close YouTube video in my basement of the 6th Suite in D with no octave displacements. I think it works, but I tend to agree with you that in most circumstances, G major is probably the more reasonable way to do it. I've played the non-arranged D major version in two situations: 1. When I've played the complete set of Suites (to keep it uniformly just a transposition) and 2. I like playing either the first or second movements on their own, just as a short piece on a recital. I think actually the second movement is quite beautiful up high in the right acoustic--- quite different from what Bach probably imagined, but it creates a nice atmosphere.

Tom, yes, the Gamba Sonatas do work well on viola, and there aren't many changes. Same with the Arpeggione... a few changes are necessary, then there are a few more that a lot of people take, but the piece (IMO) is much better on viola than on an arpeggione.

Adrian, I've also been making arrangements during lockdown! It seems like a good way to stay sane, but I'm not sure in my case that it's working!

February 19, 2021 at 04:04 AM · Thanks for this article! Although I've played a number of Bach suite movements (from the first 3 suites) on the viola, I didn't realize that there were issues with the later ones. And I learned about some new music to try!

February 21, 2021 at 08:13 PM · @Karen - there certainly are. I would not say that the way we play them these days would necessarily be considered "authentic," but they can certainly be played in a meaningful way on viola.

@Scott - I love the Arpeggione on viola, and I believe that the viola's range may capture more of the sonata in the original than the cello's. It's too bad that the cellists seem to have hijacked the piece.