July 24, 2020, 8:28 AM · The year started with my performance of all of Bach's Sonatas, Partitas, and Suites at our local bar, the Tap Room in Hadley, which has now been shuttered since March. It was in celebration of those works' 300th anniversary, and I had planned to continue the theme this year with more concerts of unaccompanied viola music in unexpected places celebrating (approximate) anniversaries. 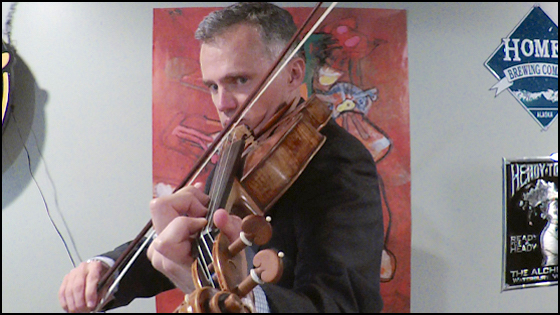 Once COVID shut everything down, I kept hoping that we would progress far enough along to have at least some sort of socially-distanced concerts be permissible. It's not as if a concert of all of the Hindemith Solo Viola Sonatas were going to be a huge draw anyway, so I was already fine with the idea of an audience of twelve!

Still, we never got there, and about a month ago, I realized we never were going to get there... this year, at least. So I had to start considering some online way to do it. I had seen some "live-stream" concerts that went well, but those generally took place in someone's large, wooden livingroom with better acoustics than ours has. I noticed other people holding "viewing parties" for pre-recorded video, in an attempt to restore some of the sense of everyone being at the same event at the same time.

What worked best for my situation, as best as I could tell, was to video the pieces in our basement, and then to add some reverb that came with the Zoom machine that recorded them. They're unedited (we don't have a home studio or the ability to splice anything), so there are the quirks (*ahem*) of a live performance, and I think the reverb enhanced the sound enough to simulate that of a performance in a pretty decent hall. I played each concert more or less straight down... it was too hot to stay in the basement for much longer!

I decided not to release these at a specific time for a "viewing party", as to me, there was no escaping the reality that these will simply be watched like any other YouTube videos. On the plus side, if someone is interested, they don't need to be free on a specific date and in western Massachusetts to see them. We also took advantage of the idea that it was not a normal concert in that I was able to address some complaints I've heard over the years about some of our other videos: The camera was too far away to see what my hands were doing. By standing directly in front of the camera, whatever I'm doing technically should be quite visible. So there ended up being some positive points.

Most of the Hindemith's Four Solo Sonatas were premiered by the composer in the early 1920's, and the Reger were premiered in 1917.... making them all vaguely one-hundred years old. Although my own pieces go back as far as 2008, some I had never gotten the chance to premiere so.... this is it, right now in 2020, I guess!

I think online teaching works very well and I have been doing it for about ten years... but online concerts will simply never replace the live experience. This was my way of making the best out of the current situation, and I hope some people will at least enjoy the hybrid concert-video experience I was able to put together. I'm interested to see what other possibilities people come up with going forward. I don't think concerts are coming back here any time soon (responsibly at least), so we need to find a way to keep presenting music to the public in engaging ways that fit the current environment.

July 24, 2020 at 07:44 PM · Incredibly generous of you Scott, thanks for the superb performances. I much enjoyed your character pieces.

July 26, 2020 at 10:01 PM · Scott, I am in awe of your playing and the enormity of this project! Today I listened to the Reger and found them absolutely beautiful. I will get to the Hindemith and your original pieces in the next few days. Thank you so much for sharing these wonderful performances!