Hindemith in Isolation and Why My Wife is a Saint 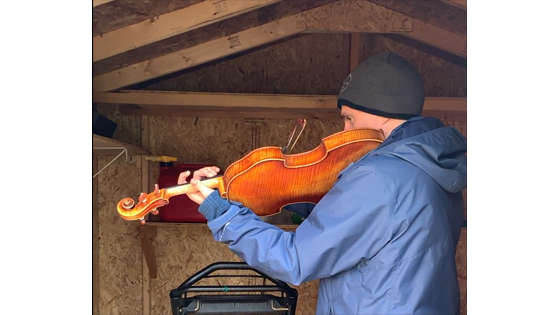 During this global pandemic, I'm lucky to have an online private teaching studio and my wife and live-in duo partner Tanya to play viola duos with. Still, I also wanted to use the time to revive and renew a recital series I gave a lot in the 1990s called 'Greatest Hits from the Twenties', which featured movements of Bach's Sonatas, Partitas, and Suites (1720), Paganini's Caprices (1820), and Hindemith's Solo Viola Sonata 25/1 (1922). In a non-musical way it's quite minimalist: just me, the audience, and a viola.

Now that we're in the 2020's, I wrote something that I could play, but the real project began when I wanted more options for the 1920s. I had learned all the Bach and Paganini in the 1980's and '90s and could pick the more audience-friendly movements to play from those, but I only had that one Hindemith sonata (25/1). Luckily we already owned the music to the two other Hindemith sonatas that were premiered by Hindemith himself in the 1920s (11/5 and 31/4), so it was my goal to use this time to learn and memorize them.

At first the Hindemith seemed a lot harder to memorize than Bach and Paganini because of the harmonic language. Once I started to analyze the music though, their form and the way the motives are developed are very conventional. A passacaglia, a theme and variations, many other movements in A-B-A form... it was all very Classical, which made it easier to make sense of things.

Even in the harmonic language, there was often an underlying pattern that mostly stayed consistent. The first movement of 31/4 with the repeated unison As (and later Ds) keeps repeating the same sequence of D, A flat, E, G, F, E flat, B flat, G flat, A (using every half step between D and A). Except for one section (where he leaves out just one note!, the G), this is the pattern that keeps repeating amidst the changing time and unison open strings. It's not obvious when you first hear it, but once you find it, it makes it a lot easier to memorize, and now it's impossible not to hear it.

So my poor wife has had to listen to a lot of Hindemith these last couple months. She's a fan of Hindemith, too, but maybe not for hours on end. At times, she made me practice in the shed. Here is a short video:

Now that I have them from memory, I can lay back and give her a bit of a break.

The Greatest Hits from the Twenties can be very flexible, depending on the event. A very serious Classical music crowd might get full sonatas, whereas just a demonstration for kids might get only the most famous and shortest movements. While there are a few etude-like tunes I likely wouldn't program, there's a ton of great music to choose from--- probably around 6 hours without taking any repeats--- so that you could keep repeating the program many times without ever programming any of the same music twice.

You'd even have the choice whether to start in 1720 and go forward or to start now and go backwards in time. It can become a mini-music history lesson, covering Baroque, Romantic, 20th Century Neo-Classical etc. (The only really major period not represented is the Classical Era, but I think very little unaccompanied music for strings was written during this time.) While the Hindemith is specifically for viola, certainly the Bach and Paganini could be played on either violin or viola, depending on the point of the presentation. Despite my extreme violacentrism, even I have on occasion switched to violin mid-concert.

If someone shows up hoping for jazz from the Roaring 20s, they might be disappointed though*.

*Or you might turn them into big Hindemith fans!!

May 13, 2020 at 06:52 PM · I dig the full Hindemith on your channel. Sometimes I wonder if Hindemith is like eating your vegetables, but I think eventually your ear bends around to it, and if nothing else, it is challenging enough that it rewards many listens and doesn't become cloying like something that is immediately approachable can sometimes become. It may not have mass appeal, but it's music for posterity, if there ever was such a thing.

The Kleine Sonata for Viola D'Amore is especially charming.

May 14, 2020 at 12:24 PM · Thank you, Christian! While also recognizing that most of it isn't going to get on the top 20 charts, I really enjoy and admire Hindemith's music. I didn't know the viola d'amore piece and enjoyed listening to it at YouTube. Steve, yes, I waited quite a while before exiting the shed!!

On Earth Day a few weeks ago, I made an example (in lockdown) of a possible short version of this recital. For anyone interested: https://youtu.be/kDDzBha813g

May 14, 2020 at 03:43 PM · I like the Hindemith Schwanendreher, but, I can't even look at those Sonatas, I don't think I could even play them on violin. A story: Stravinsky was in the audience for the premiere of a Hindemith Bassoon sonata. S. asked H. how long it took to compose it. H. said "about a week" S. said "Yes, I thought so".