2020 is the 300th anniversary of the completion of J.S. Bach's Sonatas and Partitas for Violin and Suites for Cello (BWV 1001-1012). And in my biased opinion, the viola is the perfect one instrument to perform all of these works!

So this past Saturday, I took my Iizuka viola to one of our local bars in western Mass., The Taproom in Hadley, and at 3 pm started with the first violin sonata and didn't stop until close to 7pm at the end of the sixth suite. (In the interest of not developing tendinitis, I did skip many of the repeats.)

Although I had performed both sets in my early twenties, I had never done them together--- and certainly not in a bar. So I had no idea really what to expect. I think the concert was a success (=the audience enjoyed it), and I think that it was a greater success in a bar than it would have been in a traditional concert hall, which I explain in the video.

Enough audience members sent in footage from their cell phones, and my wife got some video from her Zoom camera, that she was able to put together this overview from the whole concert, together with some commentary about the music and event. 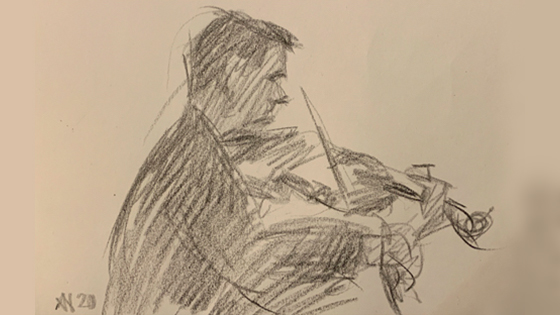 An artist happened to be present for the concert... and he drew a picture of me playing, which we're posting as the picture for this blog post. His name is Alexey Neyman, and this is his website.

I really enjoyed working on all of this Bach, and I hope you will enjoy the YouTube video we put together.

January 9, 2020 at 06:51 PM · Scott, this is a staggering achievement, and I do not know of anyone who has ever done this before. And, your performance is just lovely, throughout. Wow! How many breaks did you have to take?

Congratulations, and I hope you had some quality beer afterwards!

January 9, 2020 at 07:09 PM · Hi Laurie, thanks! Afterward I had a Berkshire Brewing Cabin Fever Ale and a Fort Hill Hera Pils, both of which were even more enjoyable than usual.

I took two fifteen-minute breaks. The first was after the 2nd Partita, and the second was after the 3rd Cello Suite. At home I played it through a few times with no breaks at all, but I thought it might be better for everyone involved to have a little silence here and there.

January 9, 2020 at 08:18 PM · I'm looking for a music stand. Oh, wait, there isn't one. Are you kidding... by memory?? BRAVO and CONGRATULATIONS! (At 1:47, I thought they might be bringing you a stretcher, but no such luck.) I hope those folks at The Taproom in Hadley know how lucky they were to hear you!

January 9, 2020 at 09:29 PM · Wow. Stunning. And I must compliment you on the production. In this age of shaky vertical video shot on hand-held cell phones, filled in on the sides by blurry moving blobs (why must they do that?), it's so refreshing to see something so professionally done. Again, congratulations - you're an inspiration to violists everywhere. (Still, I don't think I'll try that in the local sports bar...)

January 9, 2020 at 11:35 PM · Truly unbelievable ... and enviable. Tendonitis, you say?? I get tendonitis just thinking about trying to play the Chaconne.

January 10, 2020 at 12:23 AM · A wonderful performance! I congratulate you on remembering it all and playing it so beautifully. And the beer and cider pairings sounded delicious.

January 10, 2020 at 04:13 PM · To play all that music so well from memory without needing surgery afterwards is perhaps the most impressive thing I've ever seen

Many thanks to all who read, watched, commented!

January 13, 2020 at 06:32 AM · I usually just read comments, but this possibly seminal project prompts me to express my awe and respect!! CONGRATULATIONS and keep inspiring us!

January 14, 2020 at 05:27 AM · Excellent, well done Scott. I agree, the viola is an excellent instrument for Bach's solo violin and cello works. And as we know, Bach enjoyed playing the viola, so who knows? Maybe he played these works on the instrument as well!