A Fanfare for the 2020 American Viola Society Festival in Knoxville, Tennessee 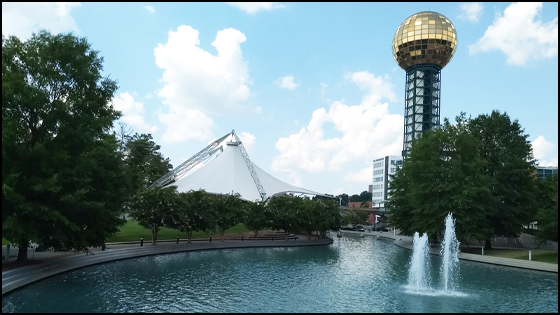 I wrote Fanfare Under the Sunsphere for the 2020 Festival of the American Viola Society to be held June 3-6 in Knoxville, Tenn. I felt that a viola festival needed an Olympics-style fanfare! My wife Tanya and I plan to be there, and I hope you will consider coming as well. Please stop by and say hi if you do.

My first full-time orchestra gig was as principal violist with the Knoxville Symphony and Chamber Orchestras (while Tanya was playing down the road as principal violist in Chattanooga.) Knoxville is a modern city with a lot to do downtown (and on Kingston Pike) and with many parks and greenways, and I chose its most recognizable landmark, the Sunsphere, to base the fanfare on.

The Sunsphere was built for the World's Fair held in Knoxville in 1982. I think of it in many ways as I do the geodesic sphere in front of Epcot Center, also built vaguely around the same time. There's something very 20th Century American about it, and I chose an idiom to write in that reflected that. Additionally, in the park by the Sunsphere, there is a statue of the great composer and pianist Sergei Rachmaninoff, who played his very last recital in Knoxville. In the middle of the fanfare, I briefly referenced the slow movement of Rachmaninoff's 2nd piano concerto.

I was thrilled that my first stand partner in the orchestra and great friend Bill Pierce, who still lives in Knoxville, offered to take pictures of the city he has called home for more than thirty-five years.

To listen to the fanfare played by the American Viola Quartet and to get a sense of the city of Knoxville through Bill's pictures:

It's still quite early on, but the website for the festival is:
This is the festival's website

Please check back from time to time as we get closer!