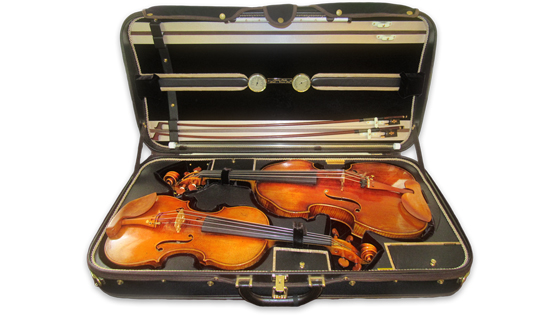 I recently attended a performance by a fine young German string quartet. They took 'senza vibrato' farther than I'm used to (and did an impressive job of it.) While I'm fairly sure they would say they played this way for historical reasons (performance practice pre-20th Century), I was left wondering if there weren't subconsciously a more modern influence: computerized sounds. They played with a high degree of accuracy both in intonation and ensemble, and long chords held this way senza vibrato sounded very much like how a synthesizer might execute them.

Could it be that after years of trying to get synthesizers to copy human sounds, now in an era so inundated by computers, some of us (to an extent anyway) are trying to copy the clean accuracy of synthesizers? As in earlier eras, the model for string playing is still the human voice, just now it's an autotuned human voice with all of the imperfections spliced out.

It's popular to say that music is universal, and maybe broadly speaking it is, but when it comes down to the finer details, I think it's quite cultural and specific to a certain time in history. Personalization, historical fidelity, phrasing/musical message, consistency of intonation, tone---- I can think of different people who would rank these categories in very different orders, and I can even think of people who would exclude some of them nearly entirely. (Historical fidelity and personalization can certainly be at odds!)

I've even heard it said that "X's tone is kind of scratchy and the intonation isn't great, but what phrasing!" That wouldn't fly in today's orchestra world, but... so what? Even among Classical soloists, some people prefer risk takers, and once we're listening to recordings from earlier eras, it's clear that smaller blips were more tolerated, and a more personalized sound was expected.

Once we've left the realm of Classical music entirely, certainly the intonation of some Klezmer and Bluegrass recordings isn't faultless--- but their listeners weren't such perfectionists on that count (while in other categories they had pickier standards. Don't forget that not so many modern orchestral players improvise!)

If you spend all day trying to perfect your own playing in one way or another, it can be hard to turn that off to listen to someone else's, which might excel in something different. However it can really be worth it. I enjoyed the quartet's performances quite a bit. As I'm older than they are and from a different continent, I don't strive to play that way myself. It's not the sound I have in my ear so to speak, but it was clearly well done. And while I've speculated about some of the true influences behind their playing, there's no doubt that they put the music across in at times quite dramatic and impactful ways.

March 12, 2019 at 08:08 AM · I think that's very well put. Scott makes two points: first that string quartet players today seem to feel it necessary to cultivate an individual sound which sets them apart from "traditional" groups of the last 50 years, regardless of whether or not this strictly conforms to what is considered to be historically informed practice. I can easily understand their motivation although to me the results often sound contrived.

Second Scott raises the vexed question of technical perfection, how important is it? My own experience is that some of today's highly accomplished chamber and orchestral players actually find it physically unpleasant, painful even, listening to players who have devoted less effort to matters of technique. Fortunately that doesn't diminish the pleasure less demanding listeners, including most non-players, get from performances in which other qualities of musicianship are given greater priority.

March 12, 2019 at 12:01 PM · Great article. I am not isolated in one form of thought in music.Sometimes I see this as a freedom, a freedom that should not be abused.

There's good technique, bad technique and different technique. Mostly music is played to the audience. Musicians all seem to have their preferences.

I never considered the idea that musicians would be adopting synth techniques on acoustic instruments, but maybe that perfection mindset has carried over unintentionally, such as "this is how it is supposed to sound" with respect to vibrato. I tend to doubt that. I could be wrong.I didn't hear the music in question so I really can't determine that. I'll take you word on it .

Thanks for sharing your thoughts!

March 12, 2019 at 01:41 PM · Very thought-provoking and interesting essay, Scott! In my view, which is admittedly not nearly as well informed as yours, I'm wondering if a lot of what we are seeing in chamber music these days is due to the influence of the Emerson Quartet. Over the course of their tenure they have set the bar unbelievably high in terms of artistry, musicality, technique, ensemble. Some of that includes tricks that only they can do really well -- like landing big chords perfectly in tune with zero vibrato -- because they've been working together so long and they know the literature so thoroughly that they can concentrate their practice time on the nuances that will give them a stamp of originality.

Now, other groups are realizing how powerful that is, so they practice a few of these elements and place them into their performances, not quite like parlor tricks, but there is an element of "we're doing this because we can."

So if you asked me, I would say other groups are emulating the Emersons. Not synthesizers. And yeah that's a freakishly high technical standard.

March 12, 2019 at 06:38 PM · Scott, your article really crystalized something I have been thinking about lately. I'm trying to be more open-minded in my listening! I greatly appreciated your ability to set aside many of your preconceived ideas when listening to the young German quartet. When it comes to vibrato, I tend to fall in "the more vibrato, the better" camp. Then I started listening to countertenor Andreas Scholl and I realized that it's not the lack of vibrato I object to. It's the oftentimes whining, scooping, crooning approach that sets my teeth on edge, and the fact that there is no margin for error in the pitch. When Scholl employs the technique, he is always dead-center in the pitch and there is a clarity and simplicity to the sound that is simply breathtaking. I am inspired by your thoughts, as well as those of commenter Timothy, who states that he is "not isolated in one form of thought in music."

March 13, 2019 at 10:24 PM · Some days I enjoy Italian food....other days, Chinese, German, Polish, and so it goes with music....If I got a good parking spot and some comp tickets, the concert was great....If I left the house in dispute with my significant-other, the concert could've contained no errors and still have been undesirable.....If the group was including some contemporary drizzle to the program many would be effected and listen with jaundiced ears....if the attire of the performers was less-than-formal....Oh there's so many variables that all contribute to one's appreciation level. Whereas, recordings ar perhaps less nebulous....

March 15, 2019 at 02:58 AM · As I get older, I find I often prefer the clean sound of senza vibrato, if the player(s) have a rich tone. At least, I prefer it to the overly vibrato-y sound so many soloists employ. I don't think it's a love of electronic sounds so much as a growing taste for simplicity, in sound as in flavors.

March 18, 2019 at 01:50 PM · The question about technical perfection was best answered by Kurt Frauchiger (former director of the conservatory in Bern and cellist): "What is wrong with a good performance that it also technically flawless?" (in his book "Was zum Teufel ist mit der Musik los?"; the translation into English is mine).