January 11, 2021, 11:37 AM · The world has lost a creative musician and innovative teacher with the passing last Friday of cellist David Darling, who was 79. Originally from Elkhart, Indiana, he studied classical cello at Indiana State University and eventually worked as a studio musician in Nashville, Tennessee. In 2010, he won a Grammy for best New Age Album for his album Prayer for Compassion. In addition to his solo performances and albums, he performed with musicians such as Bobby McFerrin, the Paul Winter Consort, Ralph Towner and Spyro Gyra. A musician of eclectic abilities, he excelled in many styles, including classical, jazz, Brazilian, African, and Indian music. 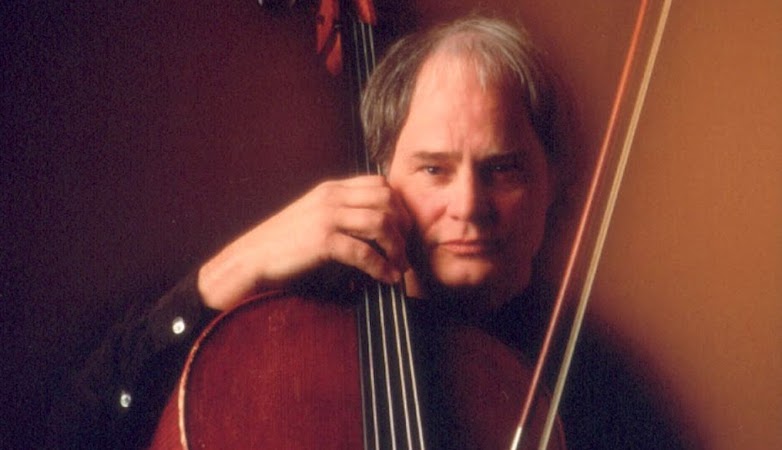 My first acquaintance with David Darling was hearing him playing his cello on a record. Then I was a performer in a program with him. Then I took a long lesson with him on improvising on a string instrument. Then he hired me to play violin with him and his cello on an album. My old band Solstice hired him to collaborate in concerts on two occasions. David and I infrequently stayed in touch over the years, but when I contacted him back in 2018, he invited me to his home in Goshen. But let’s start at the beginning.

In 1972 I was a freshman Music Education major at Western Connecticut State University. I was in the office of one of my music professors and she was playing an album of some live performance. The tune I heard was entrancing to me. The lead melody was played by a warm-toned cello, and there was oboe, but it was decidedly not classical music. I asked, "What is this?” The response I heard was “the winter concert.” I thought, “Wow!” Some ensemble here at the university had performed this exquisite piece in a winter concert!

I soon discovered my misunderstanding. The response had been “The Winter Consort” and the album a “live” album entitled “Road.” The tune that captivated me was entitled “Icarus.”

I rushed out and bought the album, having to ask the sales clerk about it because I had no idea what genre to look for it in. I listened to it over and over and marveled at the use of “classical” instruments to play a music that was a fusion of classical, pop, and jazz. As a violinist, I was particularly drawn to the use of cello in this music, since my training and experience had been exclusively classical with playing in the orchestra pits for several local productions of Broadway musicals my only ventures outside of standard classical repertoire.

Not long afterward, I walked into a violin lesson and my teacher had music playing on the stereo. I immediately recognized it as the “Winter Consort” and asked my teacher about it. He told me that his hometown of Redding, Connecticut was having a ceremony to commemorate land and wetlands being donated to the Audubon Society from the estate of the previous owner, the photographer Edward Steichen. He casually mentioned that the music was being provided by fellow residents Mary Travers and Paul Winter. “In fact,” he said, “Paul needs a string quartet. Are you interested?” Naturally I was elated and responded with a hearty “absolutely!”

Long story short, I played violin with an ensemble consisting of Paul’s soprano sax and melodeum, David Darling’s cello and voice, Russ Hartenberger and Bob Becker on percussion, and some local amateur musicians. For a piece by Paul Winter, I played the Indian tamboura and for Paul’s arrangement of Charles Ives’ “The Pond,” our string instruments supported the vocal of legendary “Peter, Paul and Mary” singer Mary Travers. The setting was sublime, and Paul has since told me this was his first “environmental” performance. We were in a natural amphitheater of recently mowed grass, overhanging tree branches from which they had hung miscellaneous percussion “toys,” and surrounding bushes where Paul had hidden speakers that elicited distinct wolf howls at one point in his piece. All in front of a pond with waterlilies and birdlife. It was magical for me.

So, as a result of that rehearsal and performance, I wound up with David Darling’s phone number and a standing invite to get together. And that’s how I first got to know him. I went to his home in Bethel and we spent a few hours in his downstairs studio playing and discussing improvisation and techniques for string instruments. He was dynamic and energetic and when he talked about music and teaching music, he was animated and passionate.

A short time later, I attended a Paul Winter Consort workshop that was presented ahead of an evening concert at Marist College. Paul Winter started it off, declaring the room a safe space and guided us through several calming, meditative exercises. Then, he turned the proceedings over to David Darling. I found out later that David had taught public school music at both the elementary and college levels. In groups of four and en masse, David took us through theater-type exercises designed to free us up and help us to understand the idea of the spontaneous expression of an emotion in sound. We created planned and spontaneous improvisations and laughed and shared. It was really beautiful and fulfilling.

In the late ‘70’s I visited David at his home in Litchfield. He took me to see Paul Winter’s new farm, with a barn that would become the home of Paul’s “Living Music” record label. Paul came out and greeted us and I got the tour of the facilities, including the cathedral loft of the barn which had a huge tarp hanging from the ceiling to catch the bat droppings.

In the early ‘80’s my band “Solstice” collaborated on two concerts with David as featured guest. In just one rehearsal we put together a program of his and our original music. And we improvised. And, introducing our encore at the end of our second collaboration, David deadpanned, “I feel like I’ve been playing this tune all my life.” And with that we played “Icarus” together.

David was interested in the Manhattanville curriculum for music education which I was studying at Western Connecticut State University with one of its originators, Lenore Pogonowski. I loaned him the “MMCP” (Manhattanville Music Curriculum Project) manual I had and he returned it a while later with a big thank you. He was formulating plans for a non-profit group that would promote his ideas on music education and in particular the use of improvisation as a tool for learning. He joined “Young Audiences” and founded his own group “Music For People” in 1986.

Back in 1980, David asked me to do a recording session with him. Amongst his various musical activities, he sometimes worked as a “studio cellist” on various projects. We were to be the “string section” for a ballad on an A&M album by the band Head East. It was an incredible experience. The session was at Long View Farm Studios in North Brookfield, Massachusetts. We went in cold, no music, just a track to listen to and improvise to. David started by writing out the chord progression and had the two of us record several tracks of just sustained, chordal strings. Then, at the encouragement of the producer, we laid down several tracks of us improvising melodic lines around the vocal. David had experience with the studios in Nashville and was no stranger to this type of operation. It reminded me of what I’d read about movie-making. We left there having recorded a lot of material, knowing full-well that only a portion would be actually utilized once they put everything together for the final mix. When the album, titled “US 1” was released, I’ve since joked that it “catapulted to #137 on the Billboard Top Songs listing.” The album was issued on vinyl, cassette and 8-track but didn’t persevere into the CD age. We did a few other recording projects together, but nothing that ever made it to a major label. But I carried the lessons learned working with David into my own experiences working in the recording studio for aspiring singer/songwriters.

Many years passed. David released several solo albums and quite a few collaborations. His non-profit organization thrived. I taught music at a Connecticut prep-school, conducted amateur community and youth orchestras, and performed in various formats. After a long time, a phone conversation led to an invite and in 2018 I travelled from Danbury to Goshen, Connecticut to visit David at the home he shared there with his daughter Jessica. We had a great visit, reminiscing and shooting the breeze. One story he shared was his one-and-only meeting with Miles Davis. Back in the ‘70’s, Miles and The Paul Winter Consort shared a bill at the old Filmore East in NYC. Miles didn’t like opening acts, so he’d performed first. As David was heading to the stage for the Consort’s set, he pushed aside a curtain and there, standing right in front of him was the man himself, Miles Davis. Taken aback, David said he jabbered to Miles about what a huge influence he was and how he had all his records. When he finally had exhausted his verbiage, he said Miles just looked at him a moment through squinted eyes and finally said, “what the f*ck is wrong with you?”

He’d asked me to bring my violin, and we headed downstairs to his home recording studio, “Camp David,” and played a duo improvisation until David stopped, shook his head, and said, “I can’t play anymore.” I knew he’d been grappling with some health issues, so I took that to mean he was too fatigued to continue. He handed me a copy of his latest CD release when I left and a few days later he sent me an e-mail with his kind words about a compilation album of mine that I’d given him. I took a selfie of us together with my “dumb” flip-phone before leaving, and that was the last time I saw him.

David’s influence on me can’t be measured. His enthusiasm and passion about teaching crept into my own student teaching, though it ultimately led to me leaving music education when it became clear that new methods and ideas were not welcome in the 1980’s classrooms. The one exception was when I accompanied a group of fellow Manhattanville students to work with pupils at an elementary school in Greenwich, Connecticut. When I had the opportunity to teach a music class, I basically recreated much of what I’d observed and participated in at that workshop at Marist that David had run. The kids had a blast and were great to work with. I found out after the class that among the observers was the school’s Principal. She was so impressed with the class that she wrote a glowing letter espousing my methods and recommending me. But it was really David who had earned that praise.

With his passing, the world has lost a kind-hearted, passionate, creative, and humorous artist. He blazed the path that many classically trained cellists now travel as they embark on careers in other music genres. His “Music For People” organization continues to flourish and will hopefully endure for many years. His many recordings will continue to attract listeners. And all those who had the joy of interacting with him will always remember him fondly. I am proud and honored to have known him and I am eternally grateful for all that he taught me and all that he shared with me.