Many of us violinists, violists, and cellists have played quartets from Beethoven’s Op. 18. These quartets are “early Beethoven,” composed in Vienna while the string quartet as an art form was relatively fresh, and in the classical spirit of Haydn and Mozart. They are more technically accessible than the "late" Op. 130s, which overwhelmed even some of the best musicians of Beethoven's time.

I inherited the set of sheet music to Op.18, all 6 quartets, years ago from a player in my old orchestra in Massachusetts. Yellowing and with bent corners, these venerable parts always seemed appropriate to my learning this venerable old music. And then there was the curious phrase written across the top.

I’ve been learning German for most of my life but I still didn’t recognize a lot of these words at first. A “Fürst” is not a title that translates easily,  and Lobkowitz sounds vaguely like "lobster"  (or like Wolowitz, as in Howard). I got distracted by those things and by the fact that “gewidmet” was an completely unfamiliar verb too, rather than just figuring it out from the context like a normal person. So, who was Prince Lobkowitz, anyway, and why should we care? I found out on a recent visit to Prague.

The 7th Prince Lobkowicz (1772-1816) was Joseph František Maximilian, the Duke of Raudnitz (now Roudnice nad Labem in Czechia). This Prince Lobkowicz (also spelled Lobkowitz) was well known for his love of music. He was an accomplished violinist, cellist, and bass singer. He also hired musicians for a private orchestra and put on performances at his family's Palais Lobkowitz in Vienna. A relative said of him that he was “kindhearted as a child and the most foolish music enthusiast. He played music from dusk to dawn and spent a fortune on musicians. Innumerable musicians gathered in his house, whom he treated regally.”

He and Beethoven met as young men and were peers and perhaps even friends. The Prince paid Beethoven a stipend and encouraged him to compose as he saw fit, rather than commissioning specific pieces, as most patrons of the era did. Under Lobkowicz’s patronage, Beethoven composed all of the Op. 18 string quartets.

Even more importantly for western classical music, Beethoven also composed several symphonies under Lobkowicz’s patronage. Beethoven famously planned to dedicate his Symphony  No. 3, the Eroica, to his hero Napoleon. When Napoleon declared himself Emperor, however, Beethoven became disillusioned and angry, and instead dedicated the symphony to Lobkowicz. The Eroica premiered in the Lobkowicz family palace in 1804, played by their private orchestra and conducted by Beethoven, before its public premiere in 1805.

Beethoven's symphonies 4,5, and 6 were also composed and premiered under Lobkowicz’s patronage. The first performance editions of these pieces too are exhibited in the Lobkowicz Palace museum, which opened to the public in 2007 after the 1989 revolution allowed the return of the Lobkowicz family property (for the second time).

I dragged my traveling companions to this museum in order to see these artifacts; my friends aren’t musicians and wouldn’t have gone without my suggestion. I may have mentioned a few times that the Eroica is my favorite symphony. I’ve played it 3 times, the first going all the way back to my senior year of high school in the Greater Buffalo Youth Orchestra. But even so, I was unprepared for the emotional reaction; the pages blurred and I blinked back tears.

Living in the 21st century United States, we tend to take a dim view of royalty. We fought a revolution to throw out a king and have been happy to be rid of him for almost two-and-a-half centuries. But I would still like to take a moment here to praise Prince Lobkowicz. Under the constraints of the political system of his time, he was a forward thinking and generous ruler. He identified in Ludwig van Beethoven a talented person, supported him, and trusted him with the independence to create greatness.

We will never know how many other talents, bright and shining as Beethoven’s, may have languished and shriveled because they never got the support they needed to thrive, were never heard in a room of their own. Like Judith Shakespeare, they lie buried at some cross-roads where the omnibuses now stop. 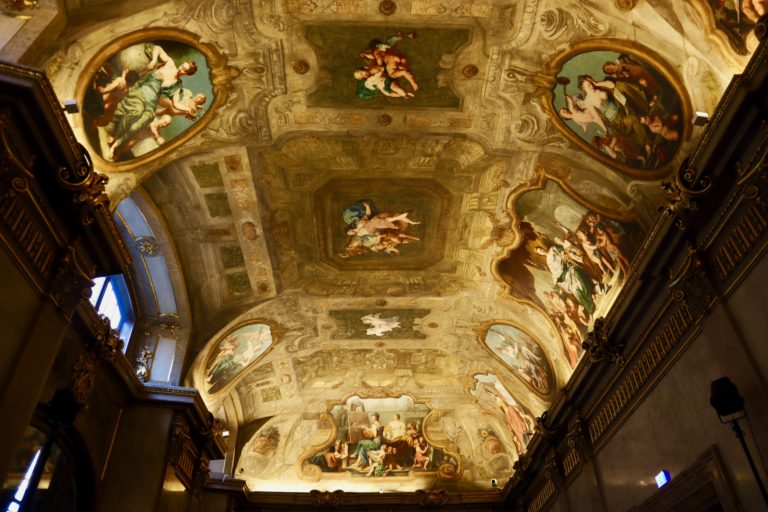 As much as everyone wants to be Beethoven in this story, most of us are more like Lobkowicz--if we’re lucky. Most of us are not royalty, musical, political, or otherwise. But all players who make a serious and sincere attempt to learn this music are performing the same essential, sacred duty: bringing the music to life.

My performance, with the South Bay Philharmonic Chamber Players, of Op. 18, No. 4, Mvt. 1

April 30, 2019 at 01:14 PM · I think they are a set that are accessible to ambitious amateurs though. This one, #4, is my favorite so far, but I haven't played most of the others. I also think there is something about Beethoven and the key of C-minor!

May 1, 2019 at 02:57 PM · In order to improve my writing, I asked a few readers if they understood the reference to Virginia Woolf's essay on creativity, "A Room of One's Own," in this blog. No one I asked got it. Which is my failing, not theirs. So I'd like to expand on it here in the comments.

Woolf's essay is about what would have happened to a theoretical sister of Shakespeare, named Judith, who had been born female in the same time with the same talent. Woolf predicted that Judith, without support for her genius, would have eventually been driven to despair and suicide and been buried at a crossroads where the omnibuses stop. She speculates that this happens not only to creative women, but to the poor and oppressed everywhere.

"Now and again an Emily Brontë or a Robert Burns blazes out and proves its presence. But certainly it never got itself on to paper. When, however, one reads of a witch being ducked, of a woman possessed by devils, of a wise woman selling herbs, or even of a very remarkable man who had a mother, then I think we are on the track of a lost novelist, a suppressed poet, of some mute and inglorious Jane Austen, some Emily Brontë who dashed her brains out on the moor or mopped and mowed about the highways crazed with the torture that her gift had put her to. Indeed, I would venture to guess that Anon, who wrote so many poems without singing them, was often a woman. It was a woman Edward Fitzgerald, I think, suggested who made the ballads and the folk-songs, crooning them to her children, beguiling her spinning with them, or the length of the winter’s night."

Woolf argues that all creative people need a room of their own; they need support, space, freedom to express their gifts and reach their full potential. Prince Lobkowicz gave Beethoven his room of his own. These days it's a real physical room: the Eroicasaal is there in Vienna for everyone to tour and to host concerts.

May 1, 2019 at 05:16 PM · A wonderful blog, complete with interesting photos. I knew a bit about Lobkowicz, but your blog fills in some fascinating blanks. I have a close friend who lives in Vienna right around the corner from the lodging where Beethoven wrote most of the Eroica. I have a photo of it which I will send to Laurie to post, since I cannot seem to do that.

May 1, 2019 at 07:02 PM · I found this blog fascinating. I knew of Lobkowicz but not much about him, so I am grateful for Karen's blog and the responses. I have a close friend who lives in Vienna right around the corner from the building where Beethoven wrote most of the Eroica. I have sent Laurie a photo of the building and asked her to post the photo since I am unable to. If you can enlarge the photo, you can see the commemorative plaque.

May 2, 2019 at 04:08 PM · Thanks, Karen. I love all of the Beethoven SQ's but I don't know if I'll ever reach the level of being able to play them. It's wonderful that you have that opportunity.

I enjoyed your writing, as always, but felt a slight change in style in this one. Is it because you're writing about history rather than your own experiences, perhaps?

May 2, 2019 at 07:09 PM · Francesca, yes, it wasn't quite so personal and immediate. I played the Op 18 No 2 about 10 years ago not too long after I first restarted. I played No 4 twice, once in the recording I shared there and once with another group. I've been a fan of Eroica since high school, and I first read the Virginia Woolf essay in college, although all of those have stayed with me. So it's not something new for me, but the ideas keep coming back in new forms, if that makes sense.

May 3, 2019 at 02:35 AM · Yes, and they tied together nicely. I never read Virginia Woolf but I caught the "room of their own" reference. Thanks for giving that famous phrase its context (for us lazy non-English Lit majors :)).