One reason for this is that I've been playing a lot of music this fall. I'm in three different orchestras and two chamber groups. I'm also in a couple of Facebook groups that are focused on music practice. I practice short snippets of my orchestra pieces, record the practice, and post the videos to the group for accountability and support. I first started doing this when I was practicing for my Telemann viola concerto performance last May.

I had a performance last weekend with the Silicon Valley Philharmonic, a group consisting mostly of music teachers and members of the San Francisco Korean Symphony that I heard about from a friend a couple of years ago when they needed last-minute violas. I have played several concerts with them since, some on violin rather than viola. The level of playing is higher than the other groups I am in. And this was a special performance at the Herbst Theater in San Francisco, in honor of Korean War Veterans.

The program opened with a quick Mozart Marriage of Figaro Overture, and then we played with the chorale on the Messe Solennelle for Saint Cecelia by Charles Gounod. Unlike Mozart, which I'd played before (but violin 2, not 1), the Gounod was new to me. It did remind me of some of the big oratorios, masses, and requiems that I used to play with the Philharmonic Society of Arlington back in Massachusetts.

The other players in this group, being music teachers with music degrees, didn't need the rehearsal time that I generally do. I can keep up with players like these if I have played the piece before and/or have a longer rehearsal cycle and can take the music to a lesson, work out fingerings, and woodshed the hard parts. I didn't have that luxury this time. The "one rehearsal" (as the conductor calls it) scared me a little. I missed accidentals. I realized that having played the 2nd violin part of a nice Mozart Overture doesn't necessarily mean you're ready to play the 1st violin part at a rapid clip. And I got completely left in the dust by some fast arpeggios in the Gounod Gloria, even though I had worked out fingerings beforehand and my stand partner graciously let me write them into her part that we were using. She played it all perfectly whereas I kind of wanted to hide under my chair. 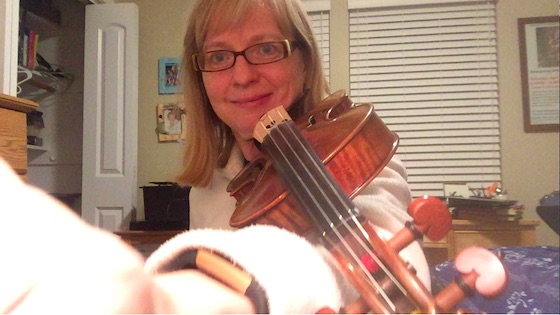 But instead I went back to the practice room and recorded myself. There I am, reaching for the record button on my phone, violin balanced on my shoulder. I've done a lot more recording myself lately than I used to, and I cringe less now when watching myself. I already know the frames on those music glasses are so 2008, and I already know the guest room where I practice won't win any decorating awards.

This passage lends itself well to practicing with a drone because each measure is a set of arpeggios with a specific base note. I can record the base note of each and play against it and listen. If I am playing out of tune, it will be noticeable because it will clash with the drone. To do this you need more than one electronic device, so I found a use for my old iPod with the broken screen (you can hear it in the background, along with the metronome). I thought this exercise would be like watching paint dry, but it's surprisingly fun. The drone notes even add some tension, which you can hear building as the music goes on.

During the week before the concert, while I was practicing, I found out from a friend that the Philharmonic Society of Arlington was playing this very piece this year for their holiday concert. I knew it reminded me of them. It must be in the air!

I had been playing so much that I was starting to worry about repetitive stress injury. I sometimes felt tingling or pain in my wrists, fingers, and joints. My left index finger joint was a little swollen for a while. I had a lesson with an Alexander Technique teacher, who asked me to "look for ease" in my body when I was holding and playing my instrument.

That request often leads to my finding places in my body that lack ease: spots of tension that shouldn't be there and places where I'm out of balance. I noticed in particular that lifting my instrument with only my left hand was not good for my left wrist. As you can see in the video below, I started lifting my instrument to my chin while also supporting it with the right hand. This has made a surprising amount of difference in how my left wrist feels: less tension, more balance. No pain.

This last practice video, the morning of the concert, was another type of practice I like to do with orchestra music: playing along with a recording. It's hard to find the right tempo, but this one was close. I had come to see this passage as an etude. Never perfect, but I was getting closer and learning in the attempt.

The concert itself was really fun. I carpooled with a bassoonist friend and we talked about orchestra and our kids and our childhoods growing up in music. At the performance I didn't play perfectly but I was no longer left in the dust or feeling like crawling under my chair. I looked for "ease" in my body as I held up my violin, and occasionally found it. My stand partner congratulated me after the concert, and I her. She asked where I taught and was surprised when I told her I taught science, not music.

I fantasized that this experience was giving me a window into an alternate life path, if only for an evening: that of professional orchestra musician. We took the stage of a beautiful theater and played beautiful music. And rang in the season of lights and concerts that won't really stop until January.

St. Cecilia is the patron saint of musicians, after all.

Across from the Herbst Theater: SF City Hall, lit purple

November 21, 2018 at 12:24 AM · Karen - as always, thanks so much for sharing your experiences and thoughts on them. You always have good ideas for trying to make things work. Continue your good work, find the balance you need, and inspire us to follow your excellent example. It doesn't have to be perfect to work. Your former colleagues in Arlington can eat their hearts out!

November 21, 2018 at 01:26 AM · Karen I love your posts. So thoughtful. I find that my viola is much more physically taxing than the violin. A couple of years ago overplaying brought me to a crashing halt and I got physical therapy. The PT showed me some exercises using a 1-meter-long stick that are good for easing nerve pinching in the neck and upper back. I'm long healed but when I have a lot of rehearsals (like you I'm in too many groups), I come back to those.

November 21, 2018 at 02:32 AM · Paul, Yes, I'm coming to the unfortunate conclusion that playing a lot of viola is exacerbating my issues. It seems like fingerings that work well for me on the violin--specifically 4th finger extensions and 1st finger back-extensions--are causing me stress and strain on the viola. So I have to approach viola playing differently: more half-position, more shifting, and more string crossings than I would do on the violin. I hope that is enough. I'll see! The concert I wrote about on this blog was on the violin and it felt pretty good. But I'm back to viola for the next one . . .

November 21, 2018 at 02:34 AM · Hi Tom, Thanks! I miss my Arlington colleagues, but I have to admit the thought of them eating their hearts out made me LOL. The Herbst theater looks a bit like Boston's Symphony Hall on the inside. And the acoustics are so much better there than the church we played in Arlington!

Fortunately my stand partner had played it before. A lot of tricky spots in the Nutcracker ...

November 21, 2018 at 04:32 PM · And BTW, the Facebook groups that I've been in are: 1. 100 Days of Practice Challenge (Music). That group opens and closes periodically to new members. I can let you know when it is open again; and 2. Musicians! Mind-Body Practice Tribe with Jennifer Roig-Francoli. I think it is always open but it is more focused on the Alexander Technique and preventing tension and stress.

November 21, 2018 at 06:32 PM · I wouldn't call the Nutcracker "sight-readable"! People perpetually underestimate the difficulty of doing that music well!

November 21, 2018 at 10:25 PM · I wouldn’t call it sightreadable either! I played a few movements of the suite a few years ago with a community orchestra and a good amount of rehearsal time. It turned out well then, but I wouldn’t want to sightread it.

November 22, 2018 at 12:02 AM · I've noticed that people who started on viola (or switched to viola early) tend not to even try to do 4th finger extensions or 1st finger back-extensions when below 3rd position. Since I have especially short fingers, even a "normal" 4th finger in 1st position is a slightly awkward extension for me. Getting used to shifting a lot between half position and 2nd position helps.

Nutcracker has enough tricky spots both individually and from an ensemble perspective that I think even an elite community orchestra needs at least three rehearsals.

November 22, 2018 at 01:21 AM · My teacher in Boston, who played both instruments for a while and helped me with the switch, warned me about this. She told me not to do 4th finger extensions on the C string. She's in her late 60s now and eventually stopped playing the viola as she got older because of the repetitive stress. My current teacher is 72 and still plays both instruments, though.

I never had problems when I was in MA but I played a lot less viola there. I played violin regularly in orchestra and string quartet, and I played viola in pickup chamber groups when a viola was needed at the last minute. I think I'm noticing issues with viola now because I play it on an almost daily basis, in multiple groups.