If there is one thing that reading and writing blogs has taught me, it's that what inspires people is very individual, and very personal. What makes one player want to run to the practice room makes another one want to run the opposite direction.

I had a wonderful summer. The last two weeks of it were a fascinating and active trip to Hawaii.

I didn't bring my violin. In fact, when I got back to orchestra rehearsal the Wednesday after Labor Day, I hadn't played the instrument in 3 weeks. And if I want to be honest, I hadn't practiced seriously since the MITSPO concert in July.

Which brings me to my first difference from many other players. Usually I think a 1-week break is a positive, inspiring thing. I don't practice every day even in the best of circumstances, and after a week I might be a little rusty for 5-10 minutes, but within the first practice session, it usually comes back.

Three weeks, though, is another story. Where I notice rustiness after a week is mostly in the left hand: my fingers are slow, not as flexible, more easily tired. After 3 weeks, it's affected the right hand too. Once in that first rehearsal, in the middle of Schumann, my bow just fell off the string. I don't know why, or how. Yuck. I guess if I felt that way after a week off I wouldn't even skip that much time either.

For the fall concert, our orchestra is playing Robert Schumann's 3rd Symphony. Again. We played it back in 2009. I had to look it up; I've been in the orchestra long enough now that the years are starting to run together. Back then, I remember reading about Schumann's madness, his stay in a mental institution. His suicide.

Sometimes I think I can hear this, feel it impending, in the 4th movement. Back in 2009, I blogged about an ironic printer's error in my part: "The Music Says 'Die!'" Here comes another Halloween.

So this September--rusty and out of practice, playing something old but new, something "feierlich" from the caverns of the mind of a deranged and brilliant genius--I've been feeling a little in need of inspiration. Some people find inspiration in goals--in setting them and achieving them. And I have to admit, that's not really me either. Goals, at least big ones, tend to discourage me as often as not, to bring on the bad kind of perfectionism and the associated procrastination and unhelpful comparisons. Since my blog about Gretchen Rubin's Abstainers and Moderators, I've been reading a little more of her work and adding some Scott Adams.

I think I'll blog more about these writers in the future, but for now I've been exploring the idea of goals vs. systems that Adams articulates. The idea, as I understand it, is to put a system in place that doesn't require willpower or focus on a goal to move forward.

Whereas when I read about goals I tend to feel like I'm reading a foreign language, the language of systems speaks to my relationship with the violin. I have a number of systems for practicing, some of them are weird, some are not.

1. The foam ear plug. One part of the system is to wear a foam earplug in my left ear most of the time while I'm practicing. With a foam earplug I can hear the sound muffled through my left ear, and normally through my right ear. I started doing this after talking with a long-time member of my orchestra who is 85 years old. She is almost completely deaf in her left ear, but not her right. She attributes this to having had a violin directly under her left ear for much of the past 80 years. While I don't know if this is the cause of her deafness or not, I was concerned enough to try out an earplug while I was practicing and see if I could tolerate it. I'd also like to be still playing when I'm 85, and I'd rather not sacrifice my left ear's hearing to do it.

This earplug had some completely unexpected benefits, the main one being that it makes my playing sound much better to me when I'm practicing. It cuts out 90% of the scratchiness in tone and most of the weird overtones and buzzing and freakiness that I sometimes hear on the E-string (especially when I play the note B), enabling me to just focus on pitch. It makes my violin sound richer and smoother. I enjoy listening to myself practice more and can practice longer because of it. I played a scale for my teacher with the earplug out and the earplug in and she said she noticed a difference: she said I sounded more confident and played more on the "center" of the pitch with the earplug in.

2. Simulating performance conditions as much as possible. So, if I'm practicing orchestra music, I move the music stand over to the left, put it down lower than I'd like, and sit to the right of it, far enough away that I have some trouble seeing some of the accidentals. This is how I have to sit in the orchestra. Then I start playing, and I pretend the conductor is in front of me, the way she would be if I were rehearsing. I look up at her, down at the music, up at her. I may have to get a picture of her to put on the wall at home so I don't get distracted by what's going by the window outside, but this is still a system in progress.

3. The violin wall hanger. I have discovered over the years that taking the violin and bow in and out of the case is a pain in the neck and is actually a barrier to my practicing. Ugh, I have to find a place to put the case and then unzip and unlatch it. Ugh, I have to tighten the bow. Oh, geez, now I have to put on the shoulder rest too. Sounds a little ridiculous, I know, but the String Swing violin wall hanger is actually pretty cool.

4. The iPod. This has recordings to listen to while I'm exercising. It also has tuner and metronome apps. While I know that electronic tuners are controversial to some people, I find a tuner useful in the way that a metronome is useful. They're both systems of a sort, external ways to remind your internal sense of timing or pitch how they're supposed to be doing things. Reality checks for when you're alone and your teacher isn't there to point out that spot where you're rushing or dragging and don't even realize it, that spot where you're overshooting a shift or have learned to hear the interval too narrow or too wide. They're faithful buddies that tell it like it is, without value judgement or snark.

I guess I have goals for the Schumann. They might be to play it better than I did in 2009: to really feel the 1st movement in 1, to get more of the notes, to learn to see the majesty of the Cologne cathedral, rather than the composer's fear of eternity, in the 4th movement; to not lead the violin section astray; to watch the conductor as much as possible.

We are also playing Mendelssohn's "Hebrides" Overture, also called Fingal's Cave. That piece is fun to play, and so I think that's my goal for that piece too: to just have a blast. This means being able to play those 16th notes well enough and fast enough to actually enjoy them, so, hello metronome. Hello earplug. Hello violin hanger.

My 6th grade son plays the cello. This year he was asked in school orchestra to pick someone who was his inspiration. All the other cellists picked Yo-Yo Ma, who is a perfectly fine choice. My son picked his mom. That makes me feel like I am doing something right. 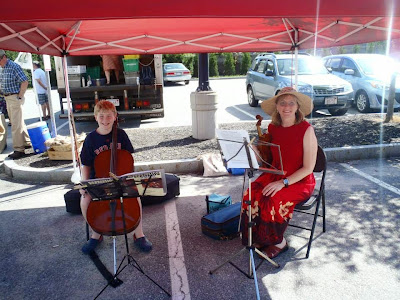 From Krista Moyer
Posted on September 24, 2014 at 10:04 PM
I practice about half the time with a foam earplug in the left ear for exactly the same reasons that you state and have found the same benefits. It helps me stop obsessing over hisses and scratches and lets me focus.
From N.A. Mohr
Posted on September 25, 2014 at 1:06 PM
Adorable photo! I think it's so cool when the kids want to play with the parents. I was hoping my daughter would accompany me on the piano...but I frustrate her too much...lol. Maybe one day.

I also have my violin hanging for easy access...I find it really helps, esp. for the 15 minute increments I seem to work in most days...

As far as stands go - we each have our own...yes, even in the string section. I can understand why most groups don't want that many stands out if they don't have too...but it's certainly a doable option.

Now that I've switched to playing the bassoon in our orchestra, it's a non-issue. Woodwinds all have their own parts and hence - stand.

From Tom Holzman
Posted on September 25, 2014 at 9:36 PM
tKaren - I love the pic. Where exactly are you geographically? Is that downtown Belmont?

It is always rewarding when you child looks to you as an inspiration rather than as a source of irritation! Nice work!

I like your system. The one thing that had not occurred to me was simulating performance conditions. That makes sense.

I recall a recent concert where we did Schumann #3. The conductor explained that he had written it as he was beginning his descent into madness, and some of it had to be "edited" by others who came later to make parts of it work. Good luck with that and the Mendelsohn, which I also remember from a concert we did.

From Karen Allendoerfer
Posted on September 25, 2014 at 11:59 PM
Hi Tom,
The picture is in the municipal parking lot in Belmont Center, behind the row of stores. They have the Farmers' Market there on Thursdays. This is from our Farmers' Market performance last summer.

As a parent it's definitely possible to be both a source of inspiration and a source of irritation. At the same time, even!

@N.A. Mohr, you should meet my 15-yo daughter. She also plays both the violin and the bassoon, and before I read your comment, I'd never met anyone else with that instrument combination. She is the only one in her school, at any rate.

With respect to the stands, in orchestra we're actively trying to get away from everybody being on their own stand. The new conductor supports this too. Sometimes it's unavoidable, but my stand partner and I are the first stand of violin I and we want to set a good example. And, she's an awesome stand partner.

@Krista, why did you first try the earplug? Was it for hearing protection, or were you explicitly trying to eliminate scratchiness?

From Krista Moyer
Posted on September 26, 2014 at 2:33 AM
I started using the earplug for hearing protection. The benefit of hearing the violin as everyone else does was an unexpected, but happy, side effect.