The weather was dark and rather depressing; the Winter that Would Never End was still with us. But it was time for the high school music ensembles to go to the MICCA (Massachusetts Instrumental and Choral Conductors Association) festival. Back when I was a kid in New York State, it was NYSSMA. (What is it with these double-lettered abbreviations?) My daughter, a 9th grader who asked me not to embarrass her, plays the violin in the school orchestra.

Now that I have a vehicle that could technically be called a minivan, I became the official cello chauffeur, driving behind the bus. I've known a few conductors that refer to these as "celli" but I don't think that's right. I think it's just plain old "cellos." 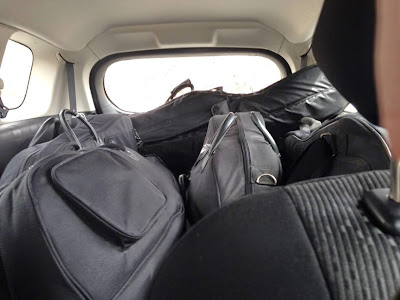 We drive 20 minutes to another local high school, one whose auditorium has been renovated more recently and has better seats than ours. Beforehand the orchestra has a chance to warm up in a back room. I sit with the other chaperones in the very back, behind the last stands of 2nd violins. Although I've been the concertmaster of an orchestra of adult volunteers for a while now, this position back here still feels in some way more familiar, more like where I belong. Childhood memories--all those old NYSSMA festivals--have staying power. If my old German factory violin could talk, it would have even more stories to tell. It was around 150 years old back when I took it to those NYSSMA festivals. Thirty years later, with a few more dings and scratches and closing in on 180 years of age, it's in the hands of my daughter at MICCA.

From the way back here, I'm struck anew by the power of a massed string orchestra, especially in the low register. This high school has 4 bassists and a minivanload of cellos (my high school orchestra, by contrast, went through at least one year of only a single cello player). One of my daughter's good friends plays the bass: she's a petite girl, a little shorter than I am, and uses a 3/4 size bass. In fact, 3 of the 4 bassists are average-height girls. The 4th, a boy, is the only one playing a full-size bass. They go through tuning their low strings to each other, until it's one unified rumbling.

The orchestra is playing a couple of pieces from last week's "spring" concert for the competition. One of these is an arrangement, for string orchestra, of the 4th movement of Dvorak's 8th symphony, a piece I played last fall with the Arlington Philharmonic. My daughter and I had a similar convergence a couple of years ago with Grieg's "Hall of the Mountain King." That time their arrangement avoided most of the 7th position screeching of the original. This arrangement is more ambitious, but it still divides the 1st violins into 1a and 1b sections. Violin 1b doesn't go up as high, I found out at my daughter's lesson. And at one point, I heard her walking around the house singing bom-bom-bom . . . ba-ba-ba-ba-ba-bom . . . you know, that woodwind part that the violins are playing accented duples against. Violin 1b got that too.

This school year my daughter has sat all over the violin sections (well, except for the front of the firsts). She is near the front of the 1b's for this concert. In the fall she was in the back of the 2nds, and for the last concert of the year the firsts are re-unified, and she's in the back of them. As I'm sitting there watching all these kids, I decide again that this policy of rotation of seating between and among sections is a good thing. They've had the same concertmaster and section principals all year, which I think is good and appropriate (and this concertmaster is clearly headed for great things), but everyone else gets a chance to sit different places and with different people for each concert. The orchestra is a cohesive social group, while there is always going to be some unavoidable teenage drama, overall they get along well and reserve the competitive attitude for other schools, not for their friends.

After the warm-up they play in the main auditorium, while a smattering of parents, the band from their high school who is playing next, and a group of adjudicators watch and listen. It was my second hearing of this performance in about a week, and this one was clean and impressive like the first one in concert. It's maybe a little embarrassing, but mostly a matter of pride, to admit that the Belmont high school orchestra is better than the adult orchestra I play in. (Certainly they have a more skilled concertmaster.) What they don't have anymore is that whine of shaky intonation that characterizes many student orchestras at the beginning levels. They started to lose it sometime in middle school and now it's completely gone. Instead their tone is rich and full; the impression of power that I got in rehearsal remains on stage. (Mentioning this to my daughter afterwards, she said, "well, some people fake it, and S--the concertmaster--plays really loud").

After the concert and judging, each groups gets a master class with an orchestra educator from another district. Theirs was an enthusiastic and energetic professor who directs an ensemble for non-majors at a local university. At the end of the session, he stopped and asked them, "don't quit music." He said that in the ensemble he teaches, with its literature majors and engineers, the walk across campus to the music building is sometimes the best part of their week. Nobody told me that in so many words when I was a kid, but I believe it.

The judging results in medals for the different ensembles. All the gold medal winners are entered into a lottery to play in Symphony Hall. As it turns out, the orchestra did win gold, but then did not win the lottery. I was a little relieved, honestly, because my daughter had another commitment the same weekend that would have been hard to get out of--but it would have been a potentially once-in-a-lifetime experience to play in Symphony Hall. The Wind Ensemble did win gold and did play there last Saturday. 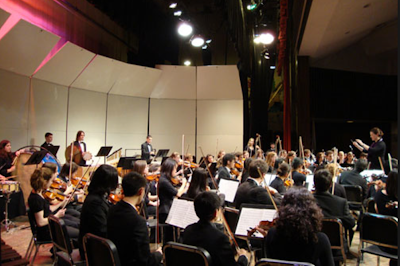 From Tom Holzman
Posted on April 15, 2014 at 9:03 PM
Sounds like a great experience for the high school players and brings back memories of my youth. Playing in a very good high school orch with a good conductor was a major factor my satisfaction playing the violin at that age. I still have very vivid memories of those experiences, and, in particular, playing Haydn's trumpet concerto with one of my classmates, the now well-known jazz trumpeter, John D'earth, playing the solo. Thanks for sharing an experience which is so evocative in terms of memories.
From Karen Allendoerfer
Posted on April 16, 2014 at 3:40 PM
Hi Tom, Yes, I felt that way too about high school orchestra. At the time I didn't really think of it as being that special. It was another class. But as I get further and further away from that time, I think that some of my happiest and best memories from high school are of playing in the orchestra. And I also think one of the main reasons the memories are good is that I didn't have to make music my whole life, do it for hours and hours a day, or turn it into a career.