About a year ago, I wrote about the Terrible Horrible No Good Very Bad Rehearsal, in which our conductor announced his impending retirement. There were other things that went wrong in that rehearsal--the flat tire, my broken bow--but those got fixed or replaced relatively quickly and the incidents faded from memory. My new bow, a significant upgrade from my old one, now feels like I've had it forever. I don't even notice it anymore, in a good way.

But the conductor search was a different story. It started last summer, with collection of resumes and interviews. The Board of Directors, concerned about potential effects on morale of both players and audience, decided against a long, drawn-out conductor search lasting an entire season or more. Instead, our retiring conductor would conduct one last concert in the fall, with Dvorak's 8th symphony on the program. That rehearsal cycle would be used to interview candidates and select a new conductor for the Family Concert at the end of February. So, by the opening of the 2013-14 season, the field had been narrowed down to 3 finalists, each of whom was invited to conduct one rehearsal for the Fall Concert.

I was not on the selection committee, although in another time and place I might have liked to be. With getting started in my two new part-time jobs (one of them a start-up) I had too much on my plate outside of music to add another commitment. There was always a lot of chatter about the subject before and after rehearsal and during the breaks. "What are we going to do?" "We are going to miss Walter so much." Although the orchestra has been around since 1933, and has had several esteemed conductors in its time, virtually everyone in the current orchestra, myself included, had only played under Walter. He was there 33 years. When he first took the job, he even had hair.

As an interested observer, concertmaster, and member of the board, I was very impressed with the efficiency and professionalism that the committee exhibited in interviewing the candidates. There was some soul-searching about what kind of group we wanted to be. When we started, back in 1933, we were a community, volunteer, non-audition group of amateurs. We had a service mission, too: the late long-term concertmaster, Phyllis, had led chamber groups that went into schools. The orchestra held benefit concerts for the troops during World War II. And the feeling was quite strong now, too: that identity and mission of volunteer community service would not change. This is who we are, and we need a conductor who believes in that too.

The committee chose three very worthy conductor finalists, two men and one woman, any one of whom I would have been happy to play under. The rehearsals with the candidates were a delight, each with some new way to look at the music we'd been rehearsing, each night the orchestra clearly sounding better at the end of the rehearsal than it had at the beginning. At that point, I found myself glad not to have been on the selection committee after all. There had been a little chatter about the gender of the candidates. I had heard, privately, both opposition to and support for the general idea of a woman conductor. I personally was warm to the idea, especially after reading this New York Times article about the ongoing struggles of women in the conducting world.

What I said aloud, and believed, was, "we want the best candidate, regardless of gender." I thought about how representation of women and ethnic minorities in symphony orchestras had improved greatly since auditions started being held behind screens. But you can't audition a conductor behind a screen. I dutifully filled out the questionnaire that all the orchestra members had to fill out after each candidate's rehearsal, relieved that I didn't have to be the one making the choice.

In the end, however, it was a straightforward, unanimous decision. After considering all the factors, experiences, interviews, questionnaires, the committee unanimously recommended, and the Board unanimously approved, our new conductor, Joan Landry, to be the orchestra's new Music Director.

Our first concert under her leadership was last month, February 23. The local paper, the Arlington Advocate, did a feature on the concert ("Music From Around the Globe") and a nice interview with Maestro Landry: "Creating a Sweet Symphonic Sound" by Eileen Kennedy. 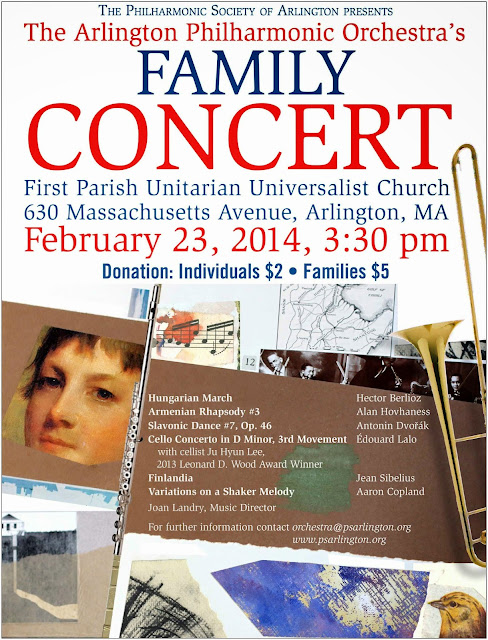 From Tom Holzman
Posted on March 19, 2014 at 8:51 PM
Congratulations on your successful search and great outcome! Your orch is very lucky. Our conductor left more abruptly than he anticipated last October, and found two people to share the music/director conductor responsibilities. We were able to do a good December concert. However, they got ambitious and decided we should have a concert in early April as well as one in early June, and one of the two picked out some very difficult music that we could do a good job on if there was only a June concert, but maybe not so good in early April. We will see. The one who picked the difficult music doesn't have the greatest interpersonal skills, which does not help. So, your experience looks like a model of a search well done. OUrs was more ad hoc, and the problems are beginning to become clearer. I hope we do not lose too many people, because the previous conductor really did a good job of building up the orch.
From elise stanley
Posted on March 20, 2014 at 10:03 AM
Thanks for sharing the story - too often we hear the sad part and don't get closure on the outcome. And congratulations on your new conductor - and I will not hide my bias that I'm very glad its a woman (though even gladder that was the best candidate).
From Karen Allendoerfer
Posted on March 20, 2014 at 12:56 PM
I felt better as soon as I met the candidates. I realized it was going to be okay. I think the conducting world is changing: I don't meet many who fit the autocratic, egocentric stereotype anymore (or at least that type is not going to apply for a community orchestra job). We had the privilege to interview passionate, dynamic, down-to-earth musicians.

I'm actually not playing in the next concert because I'm going to be out of the country for it, and I really miss the weekly rehearsals. But Elise, I decided to use the opportunity of not having orchestra to learn a solo piece, and I'm learning the Beethoven Romanze. Is your recording still up somewhere? I looked for it recently and didn't find it. Guess I'll just have to settle for YouTubes of Perlman, Menuhin, and Heifetz!

From Tom Holzman
Posted on March 20, 2014 at 9:28 PM
For the Beethoven Romanze, IMHO Oistrakh recordings should be consulted. Good luck! They are beautiful pieces.
From Francesca Rizzardi
Posted on March 23, 2014 at 4:19 AM
Hi, Karen. I was sorry to hear about Phyllis.

The Berkeley Symphony has a woman conductor, Joana Carniero. To tell you the truth, I didn't think anything of it. I just don't see conducting as inherently male. If you've seen "Music from the Inside Out", about the Philadelphia Orchestra under Christoph Eschenbach from the players' viewpoint, you'll know that being male doesn't necessarily give you the player's respect.

Best wishes for a great continuation under your new conductor.

From Karen Allendoerfer
Posted on March 23, 2014 at 9:01 PM
Francesca, yes, Phyllis passed away last fall, shortly before her 97th birthday. She had retired from the orchestra a couple of years previous to that. My string quartet (the "Mystic String Quartet"--we are all members of the Arlington Philharmonic) played an early Mozart quartet and the 2nd movement from Schubert Rosamunde at her memorial service. She had requested Mozart and Schubert, and an amateur string quartet.

It's quite something to attend a memorial service for someone born almost 100 years ago and hear about all the changes they witnessed. She didn't go to college or conservatory--it just wasn't usual for women of her demographic to do so in that era. Apparently she snuck into and audited classes at NEC.