On the morning of Friday April 19, around 6:30 am, we got a call on my husband's cell phone, waking us up. Ugh, I thought as he rolled over to answer it. I'm not ready to get up yet. As an employee of Google's travel division, he's on call every 6 months or so, to help airlines with their computer reservation and search systems if there should be a problem, any time of the day or night. Usually the problems are trivial, the worst he ever has to do is make a couple of phone calls.

But it wasn't about Iceland Air this time, or any airline. It was Google security. A police officer had been shot and killed near the Google office in Kendall Square in Cambridge, another officer had been injured somewhere else, there was a manhunt on for the marathon bombing suspects, and all Google employees were advised to stay home and work there.

Planning to stay home anyway myself, and work on some final grade reports for my students at UMass/Boston, I got out of bed, went upstairs, turned on my computer, and logged into Facebook. In the past couple of years I've found that to be the quickest way for me to find out what's going on. People post news and links, photos and personal reactions in real time. It was still early for most of us in the Eastern Daylight Time Zone.

I posted a quick note saying that we'd gotten this call and were staying home, just so friends and relatives would know we were safe, and scrolled up and down my newsfeed. Sure enough, there it was: friends checking in, helpful, up-to-date articles and twitter feeds that I didn't even have to search for. I "liked" my local friends' statuses, just as a sort of quick touch base: good, you're there, so am I. I didn't wake my children. Sleeping in on their last day of spring break before the weekend, they didn't need to know about this yet.

As I read the articles, a clearer, and more frightening picture began to emerge. The slain officer was at MIT, and he was shot on the street corner right across from the building where I used to work. The fiery standoff with police had taken place not much more than a mile from my home, in the neighboring town of Watertown, where we go to church, where I drop my kids off at karate several times a week. The Home Depot where I bought grass seed and perennials a few weeks ago, that building with the rainbows, was now the site of a large assembly of police officers.

I had to finish my grade reports, so after an hour or so, I tried to get on with it. I only had two more to go, but I kept checking the internet instead. Then I had breakfast with my family, who turned on the TV, or to their own computer screens. The karate sensei posted how surreal it was to see the street where his dojo was on TV under these circumstances. A former coworker with a young baby who lives in Watertown posted regular updates about helicopters and police at her door. One local facebook friend posted a custom google map comparing the locations of significant events in the manhunt with significant locations in his own life, such as his home, his kids' school and his kids' pediatrician.

After watching a repeat of the same interview with the suspects' uncle, it occurred to me that I might be better off away from media, away from screens. Maybe I should practice my violin, I mused. This thought came up several times throughout the day, but I never heeded it. I finished my grade reports inefficiently and kept circling between Facebook and the TV and the live blog twitter feed. I distracted myself with an intense debate on the violinist.com discussion board that I didn't really feel that strongly about. I couldn't seem to tear myself away from the internet. Towards the end of the day I got a call from the coordinator of the Philharmonic Society's Young Artists' Competition, wanting me to check on a couple of judges to make sure they'd be able to get to the competition the next day, with public transportation still shut down. I looked up the phone numbers that I had or didn't have in the same scattered, inefficient way, and then made a few calls. Public transportation opened back up. The surviving suspect was discovered hiding in a boat, and arrested.

Our church service on Sunday was originally supposed to honor Earth Day, to be about flowers and other happy, growing things. The Family Choir was to be singing Tom Chapin's "This Pretty Planet," one of my favorite songs from one of my favorite singers. The flurry of emails on Friday and Saturday included an announcement that the topic of Sunday's service had changed. Instead of an Earth Day service, it would be a service about "Friday's events." When I read that, I had mixed feelings. On one hand, how could they do anything else? A church in Watertown, MA, some of whose parishoners knew the boat owners, lived on Franklin St., went to high school with one of the suspects, would have to grapple with this.

But I was weary. And, introvert that I am, I tend to prefer to grieve in private, without unnecessary words, without the performance anxiety that invariably accompanies the feeling of having to say the right thing, having to offer comfort when there are no good answers. I decided to go to church anyway, though, thinking of the music. Music always makes everything better. Way back in 2001, the Sunday after the 9/11 attacks, I stood in that same church, with many of those same people, and sang the hymn, #159 in the hymnal, "This Is My Song," with the tune of Sibelius' Finlandia. Similarly dry-eyed and weary until that Sunday morning twelve years ago, I barely made it to "This is my home, the country where my heart is" before starting to weep. And by the end of the song, "O hear my song, thou God of all the nations, a song of peace for their land and for mine," I wasn't singing anymore at all, aloud, only in spirit, having lost my voice completely. It was the right hymn, at the right time. Even without being able to sing, I felt healed and uplifted by the attempt.

With this memory newly fresh, I approached the service. But it wasn't the same. At choir rehearsal, rather than being one big happy, singing family, my daughter started acting like the teenager she is, my son started whining. Unable to gracefully rise above the squabbling, I stalked out of rehearsal and went into the church backyard by myself, hoping for the performance anxiety--the feeling that my family was inappropriate and poorly behaved and causing a bunch of trouble for everyone else--to subside. I looked around at the sunny day, the beautiful weather, the flowers starting to bloom. "This is a pretty planet," I thought, "whether I sing about it or not." Having utterly forgotten to bring tissues, I spent most of the actual performance wiping tears off the end of my nose before they dripped onto the sheet music and the floor.

For the first time in my life, music--beautiful and moving though the music was--just wasn't enough. I needed to hear words. No one had the right words, and yet everyone had them, all at the same time. Friends expressed sympathy over teenage behavior, my daughter apologized, my son sang with me after all. It turned out I wasn't even the only one who had initial reservations about coming together. But we were all glad, in the end. In her meditation, Rev. Andrea Greenwood quoted a reading from her first service at this church, the service in which she was installed as minister:

“On my way to work, I think of you; through the streets of the city, I think of you; companions of my life; of the happy hours and the sadness of being alive . . . I walk with you, and I carry you in my heart like a prayer.”

The flowers I bought at that Home Depot with rainbows on the side are blooming now: 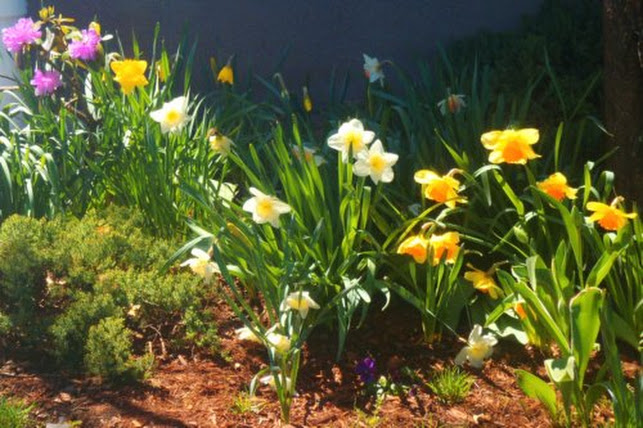 And this is still a pretty planet, whether I sing about it or not. There is shelter, in this place.

I was so relieved to hear that you all were safe and sound, then spent a good portion of the day fretting and waiting to hear from another friend (a fellow violist) who was in rehearsal a block away from the bombings, and to later find out that he lived about 200' from the bomber's home.

Tragedies like these can't truly be understood nor 'processed' like your run-of-the-mill crises. Like you, memories of 9/11 percolated to the surface and I could never settle in to do much of anything productive, including practice - on open strings. Only today did I start putting my fingers down on the strings again.

From Karen Allendoerfer
Posted on April 25, 2013 at 12:02 PM
Thanks, Mendy. I wasn't even in town for the marathon itself, it was the school break and I took my kids to visit my parents in Western NY.

There were some kids with a lemonade stand on the corner yesterday, raising money for One Fund Boston, the fund for the victims and their families.

From Tom Holzman
Posted on April 25, 2013 at 12:52 PM
Karen - thanks for sharing your feelings about your reaction to the events and the difficulty you had when the music itself seemed insufficient. It is hard for me to imagine being in a situation where music is inadequate, but it is clear that a person can be. I lived in various parts of Boston and the suburbs for years, but the most recent stint, in 1972-74, was in Watertown on Arlington St. Slate.com had an article where the author interviewed people on Arlington St. about the manhunt on that street, and the Washington Post had a picture of celebration on Arlington St. after the manhunt ended. It really took me back to another time and place, and it made me feel even more connected to the people up there who were involved and suffered from the awful events.
From Terez Mertes
Posted on April 28, 2013 at 3:13 PM
Oh, Karen, this is so wonderful and thoughtful and well-put. So interesting to witness the experience through a Bostoner's (?) eyes. Particularly yours! Thanks so much for taking the time to elaborate on this and share it with us.