Do you see a smile?

I recently read a business article that painstakingly pointed out, taking two entire paragraphs, how the arrow pointing from the a to the z was actually meant to resemble a smile. The article went on to praise the Amazon logo, and the smile in particular, saying that it was good marketing to associate the brand with smiling.

My reaction to the article was a little different. I've never been much of a smiler. In particular I've chafed under exhortations to "keep smiling" or to "put on a happy face," especially when I didn't feel like it. Smiles that are not spontaneous strike me as not genuine. Rather, to me they tend to look fake--manipulative, even. My conscious mind doesn't much like the Amazon logo smile, either. In fact, the "face" was the very first thing I noticed about it. I hadn't even realized the "mouth" doubled as an arrow, pointing from a to z. Even as my Amazon use has grown over the years (suggesting the manipulation is working on me), I didn't need an article to explain to me how I was being manipulated. Every time you order something from them, there's that creepy box, smiling at you even from depths of the recycling bin.

So why am I writing about an Amazon logo in a violin blog? Sure, I have ordered sheet music and CDs from Amazon, and have recycled my share of smirking boxes. But it was a different experience with smiling that has gotten me thinking about this. Several months ago I entered the "Rockin' Fiddle Challenge 2012." To enter, contestants had to learn to play Adam DeGraff's "Violinists Don't Stop Believin'" and post a YouTube video of themselves playing the piece to a special FB page that Adam had set up.

By the time I entered this year's contest, I thought I had already (mostly) gotten over the shock of seeing myself play violin on video. I had had a small solo with orchestra in the fall of 2010, which was recorded. I had entered the 2010-2011 TRFC challenge. So I knew I sometimes had this kind of "deer in the headlights" look about me when I played; I knew that at one point in my solo when I hit a bad note I had made what my daughter called a "scary face."

I had tried to make my peace with these foibles, to view them as endearing little quirks. To point out that, hey, at least I take playing the violin seriously. I would call to mind a live performance I'd seen of Midori playing the Shostakovich violin concerto: her posture had been hunched over, her face unsmiling. She'd wrung the pain and passion out of every note of that piece, for herself and for the audience. My teacher understands, she says that she and her professional colleagues can also look very serious, even to the point of scowling, while they are playing. It means something good for the sound of the music. Although you wouldn't know it from the images on google, passion, seriousness, even grace, do not always wear a smile.

And yet. In practicing for TRFC, I recorded myself multiple times and started to get a more complete picture of how I looked while playing. One thing that was completely new to me was that I do weird things with my mouth: 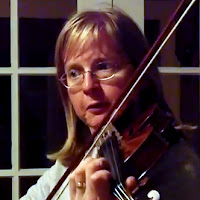 What the heck? The next time through, I realized that some of this comes from making sure to breathe while playing. It also comes from moving my chin around on the chin rest and flexing my jaw so I don't get neck and shoulder pain--both good and necessary actions, but geez, it looks funny.

And then, in response to another one of my posted practice run-throughs, Adam suggested that I play the piece while donning a pink wig and bejeweled sunglasses. He also suggested a bigger smile.

Smiling? Really? Oh dear. Did I mention I'm just not a smiler? Can't I just wear the glasses? I don't have a pink wig, but would a boa help?

It was a couple of days before the final upload was due, and so, for the first time, I consciously started trying to practice while smiling.

It's a lot harder than it looks. What I discovered is that trying to smile while playing is a lot like trying to play with/without a shoulder rest if you're used to the other way. Or like trying to keep the wrist straight to get rid of a pizza wrist. Or like trying to remember to keep the left index finger poised over the strings instead of waving in the air like a flag when doing vibrato. In short, it's pretty much like learning an entirely new technique, or breaking a bad habit. That first video became almost comical to watch. The smile would start out okay: 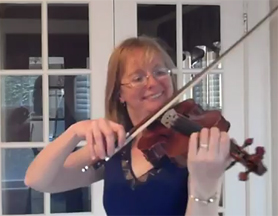 And then I'd start to lose it: 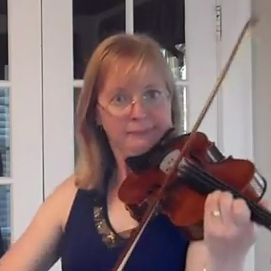 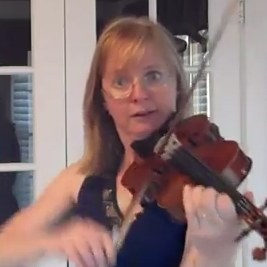 And then, something would bring me back and I'd remember: 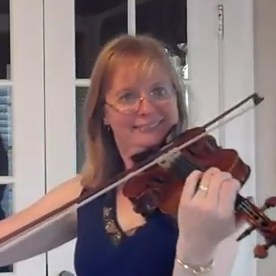 And the cycle would start all over again. It repeated several times in less than 3 minutes.

Smiling absorbs a lot of bandwidth, making my brain run more slowly, like nothing so much as a computer with a virus running in the background. And yet I kind of liked that smiling violinist. She surprised me with how happy and enthusiastic she looked, playing the violin. I wanted her to be less of a stranger. I'd certainly rather be (and listen to) her than this gal: 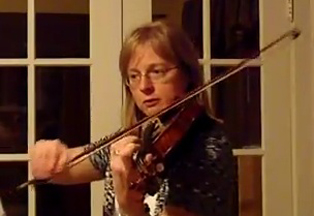 My final upload was better than the first, not as good as I'd like--on many levels. It's still a work in progress. But I still feel like I learned something important in the attempt.

Although it's been two months since the contest ended, I'd like to add belated congratulations to fellow v.commer Gene Huang, who came in 3rd, and to overall winner, Grace Youn, both of whose playing was profoundly enjoyable enough to make me forget whether they were smiling or not.

At my last lesson my teacher told me that even if I didn't smile, to try *thinking* of smiling. That was an interesting take on the conundrum, and at least prevents frowns and forehead furrows...

I have the same mouth issues and finally figured out I was either singing to myself, grinding my teeth, or a weird combination of both.

July 31, 2012 at 03:23 PM · Great blog, especially with the pics. I have to confess that among the many reasons I never wanted to video myself playing was the concern about my various expressions as I went along. I suspect that the remedy may be to wear one of those Groucho glasses/nose/mustache masks.

July 31, 2012 at 04:23 PM · Karen -- What a great blog entry. Thank you for the belated congrats! I loved seeing your progression of videos throughout TRFC. Having recorded dozens of my own runs during TRFC, it made me much more aware of how I look when playing violin. Adam did emphasize the fun aspect -- "rocking out", and smiling in particular. So, interestingly, I ended up choosing a particular run for my final upload (even though I didn't consider it to be my technical best) because I was smiling halfway through when my 10 year old daughter started dancing behind the camera. =)

August 2, 2012 at 11:24 AM · Thanks guys! Since I started playing the instrument again, I've felt the need to maintain a sense of humor about the whole enterprise. The violin is hard enough without taking myself too seriously :)

Gene, I didn't see your daughter in the video I watched. I thought it was the final, but maybe I'm not looking at the right one.

In the 2010-11 challenge, my then-7-year-old son started dancing along to one of my run-throughs too, and I ended up blogging about that as well (he comes in at about 1:54).